by Yasmin Bhad about a year ago in activism

But what is going right? 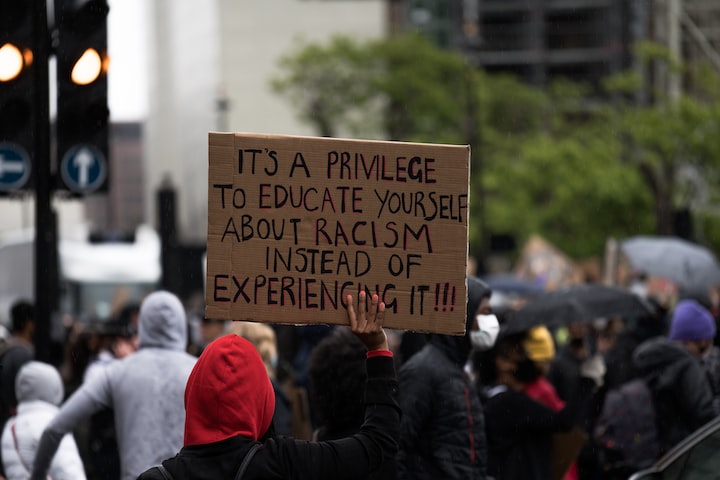 Photo by James Eades on Unsplash

Our most important focus right now is to dismantle the racism underlying our society, within our authorities and fight for the Black Lives Matter movement.

We live in a time of change and progress. We are constantly told that we are lucky to live in this generation surrounded by technology and freedom of speech. So why do we continue to feel unheard and unseen?

There are forms of inequity that seem to follow us around every day;

whether it's that black lives still haven't been heard,

that another rich pervert has been found paying victims off again,

that another child has been stabbed to death in gang violence,

that the rights to a woman's own body has been taken away by older men,

that someone has committed a shooting in a school or public place,

that the LGBTQ+ community faces hate for living openly,

that peaceful Muslims are being associated with terrorist groups,

that women are still being torn down by men and other women,

that another war has broken out and the citizens of that country are being left to fend for themselves as refugees,

that the planet is melting and people somehow believe it's fake,

or that these issues just multiply by the dozen and people continue to turn their heads and pretend they didn't hear anything for their own sanity.

This can't be okay. Our society seems to be obsessed with control and manipulation. Why are we allowing this execution of power over others who are left to deal with the hardship?

Black people represent a whole community of talent, inspiration and courage yet they still have to put up with discrimination and violence in the 21st century. They feel unsafe because they are made to feel unsafe by authorities that should be protecting them. We cannot be defined by the colour of our skin; we should not be segregated because of our culture or ethnicity. It is disgusting that these human beings are being treated as less than the powerful, intelligent and beautiful people that they are. This community have worked so hard over so many years to bring about equality and it's about time we all joined the movement in ending racism once and for all. #BlackLivesMatter

The power of money is growing every day, from small materialistic items to the buying and selling of people. The fact that a wealthy citizen can sit and lie through their teeth in court about molesting a victim, and get away with it due to their status makes me sick to my stomach. But these people refuse to live as life-long victims, they are not afraid to share their experiences, encourage others, and they will certainly not be bought off. #MeToo

Gang violence increases as more citizens are forced to crime to earn a living. Some victims have no relation to the gangs themselves yet their lives are taken by the knife. This is something that should be tackled through school programmes, youth centres and funding areas with a lower-income. The fight against knife crime requires more attention, especially for younger generations who are persuaded to join gangs for safety or to earn money. The more we educate and bring awareness to preventing knife crime, the sooner the knives could be put down once and for all. #StopKnifeCrime

The debate about abortion has been ongoing for years and there are many moral arguments on both sides. No one should be given restrictions on their own body, and you are not necessarily saving a life if you ensure the child is born. Both women and men (majorly women) can be left traumatised after an abortion and/or a refusal for an abortion so there is no simple answer in this situation. This decision should be made by people who can look at the topic from both sides and come to a balanced conclusion- not just those in charge with a biased opinion. #ReproductiveRights

Mass shooting has become a recurring issue within recent years. Most articles tend to write the perpetrator off as having a mental illness which may well be the case however that should not override their status as a person who has committed an act of terror. From children to adults' people have lost their lives and no one should feel scared to go outside in fear that they too may bite the bullet. Preventing the use of guns can contribute massively in ending shooting. #Marchforourlives

The LGBTQ+ community has had some recent wins over the last few years but it's not over yet. There are still those being disowned by a range of cultures and religions for ultimately being the truest version of themselves. They are wrongfully shamed where they should be given love and acceptance. No one chooses who they fall in love with and it should not be held against them, trans people are people and we should be proud of the fact that anyone LGBTQ+ has the strength to live their life as the person they really are on the inside. #Pride #TransRightsAreHumanRights

There are many prides to be found near you, Pride in London is just one branch of a huge tree!

One connotation of Islam is "peace", which is no surprise as this religion practices modesty and a devotion to Allah, the only being above all others. Due to terrorist acts, Islamophobia is rising and the Muslim community are being associated with violence and totalitarianism which completely contradicts the whole essence of Islam. Moreover, others have built their racist remarks and offensive ideology on an overall belief that Islam carries terrorism. Many innocent people have been attacked, bullied and isolated due to this corrupted thought process. Muslims should be able to walk in public with their heads held high, proud of their faith and they should absolutely not be associated with terror attacks that completely violate their beliefs. #HopeNotHate

There are new issues surrounding female power everyday whether it be that women are shaming men rather than preaching for equality, or that men are dubbing women as "feminazis" for standing up to them. In order to finish what our Suffragettes began; women need to stand for equal stature in this world. Women require the right to live without the concept that they represent less than men, that they can't apply for better jobs, even the dread that they will be shamed by other women for their appearance. Women and Men are powerful, and once we can stand side by side with no bias, we will have won. #Equality

Even with charitable organisations in place and volunteers, refugees are still struggling in war torn countries. No one declares responsibility over these communities, and families have to fight to eat every day. Additionally, borders are closed and they are denied access and deported from countries that could offer children and workers a better chance at life. Places like Calais can grow extremely cold in the winter so donations can make the largest difference. Although wars are extremely hard to control, there should be more understanding to those who become innocent victims of the violence. #HelpRefugees

My last summary is on global warming and the push for climate change. Many have taken to protesting and educating others about the slowly diminishing world we live in, however there are companies and individuals who refuse to believe that we are in danger of tarnishing and loosing this world. There are those who look comically down at protesters rather than listening to their words of warning. As a species we have adapted over centuries, so what restricts us from sustainably adapting now? #ClimateChange #ExtinctionRebellion

Unfortunately, there are far more heart-breaking topics that humanity could overcome from the western world and outward. I've attached information under those that I summarised for you to read more, and even get involved if you wish. It is always your choice.

By becoming aware of the world around us we create a reason to be saved. Far too long have we been told how to live by those above and around us, which shouldn't be okay. People should want to support each other and protect one another from the basic instinct that we all share this planet.

Get involved in projects, exercise your free speech, otherwise why are we given it? Have a hand in the movements for good changes and help bring some empathy to our 21st century. We need governments to listen and organisations to listen- but most importantly we must listen to each other. Challenge opinions and peacefully debate because you could open a closed mindset and bring about a new wave of equality.

when we define how our world works.

Just a gal writing about what she feels.

I try and be as unbaised as possible but sometimes I feel pretty strongly about a cause so I can't promise anything :)

Receive stories by Yasmin Bhad in your feed
Yasmin Bhad
Read next: America