HOW TO KILL A DEMOCRACY IN FIVE EASY STEPS

by Grant Patterson 4 months ago in opinion

This week's mayhem has been brewing for decades 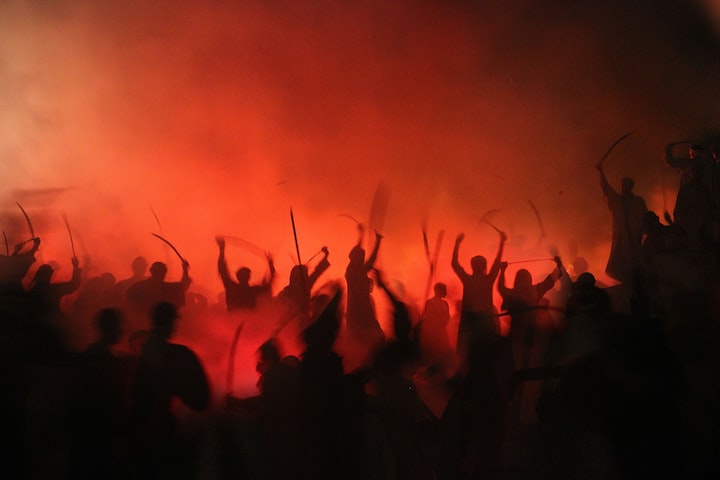 HOW TO KILL A DEMOCRACY: FIVE EASY STEPS

Allow me to introduce myself. I’m Doctor Patterson, a Democratologist. You paged me? Ooh, this doesn’t look good I’m afraid. I believe this patient is terminal. I can make an educated guess as to what killed them, though.

Oh, by the way, China and Russia are out in the hall. They’re waiting for the organs.

CAUSE ONE: FORGET ABOUT THE OTHER 50%

For those who think the entire blame for this week’s catastrophe can be laid at the hands of one orange-haired midnight tweeter, think again. American Democracy has been headed for this disaster for at least two decades, as a result of a twisted feedback loop between voters and politicians.

Remember the 2000 Presidential Election? Gore vs Bush Jr? Some of you may not, but it bore many similarities to the 2020 shitshow. There was a very close, socially divisive vote. The Democratic candidate won the popular vote, while losing the Electoral College. There was a court challenge of the results, this time by Democrats, followed by bitter cries of a “stolen election.”

Until 9/11 provided the United States with at least a temporary unity of purpose and identity, the airwaves and streets were rife with bitter talk of “Not my President,” or “If you don’t like it, move to Canada.” Politicians remembered this. They always remembered what fired up the base. Democrats began their first mutterings about the Electoral College needing to go.

Fast forward to 2008: An unpopular war in Iraq, an embarrassing failure to respond to Hurricane Katrina, and a devastating financial crisis have further embittered and divided Americans. The election of America’s first African-American President seems to offer a glimmer of hope.

But Barack Obama is not the unifier he seems to be. He makes a famous, off the cuff remark about Republicans “Clinging to their bibles and guns” which seems to reflect his true feelings about those who support his opponents. In 2012, his opponent, Mitt Romney, seems to echo his feelings, by publicly writing off 47% of the US population as hopeless couch surfers.

The electorate remembers these things. And politicians remember that writing off the other half fires up the base.

By the time 2016 rolls around, violent protests of police shootings have injected the poison pill of race into the equation. This is a weapon of mass destruction the Democrats cannot ignore. Suddenly, the other side are not only Mountain-Dew swilling dimwits; they are KKK monsters.

Hilary Clinton smugly relies on pure demographics to grant her a win, writing off the people she openly despises. Because she is a woman, she blithely counts on women voting for her. She does not deign to visit some heartland, predominantly white states, as they are of no importance. She openly brags about putting West Virginia coal miners out of work.

1. The demographic shift she’s relying on does not occur until 2040.

3. White people don’t like being told they are obsolete.

Her challenger, Donald Trump, seizes on her every error. He divides and conquers with relish. He seizes on the extremely divisive issue of immigration and brute forces it into the debate with the most radical and incendiary solution: The Wall.

Once he wins, the media takes up the torch of the opposition, and the “Not my President” rhetoric of 2000 is reborn. The next four years only serve to divide the country further. Neither party even pays lip service to the idea that they should govern for all.

The other side is the enemy. Period.

The last four years have been characterized by the sort of language that usually precedes a genocide. According to Republicans, Democrats are:

According to Democrats, Republicans are:

The real problem is, that like most stereotypes, these grow from kernels of truth. And as both parties increasingly ignored the swing voter and the moderates in the other party, they played to the base, with ever more extreme results.

The Republicans, terrified of displeasing the mercurial man in the White House, dared not attempt to correct or moderate him in any way. Trump was perceived as having some sort of electoral “magic” that no other candidate could duplicate. His red-hat supporters backed up this perception. Advisers who questioned Trump’s decisions and pronouncements found themselves on the curb. Senators and Congressmen who did likewise found themselves publicly attacked, then opposed by Trump loyalists. The lesson learned was; keep dialing up the rhetoric. Fall in line, or sleep with the fishes.

The Democrats reacted counter-intuitively to Trump’s win, largely as a result of the Democrat-friendly media telling them only what they wanted to hear. Instead of moderating their message and reaching out to disaffected Democrats and moderate Republicans, they swung hard-left, seeking to placate a new base within the party: Millennial Socialists. Products of an educational system focused more on political indoctrination than on instruction, these true believers saw in Trump supporters everything they hated in their parents. Social media served this vilification perfectly. Celebrities bayed for the blood of the enemy. A decreasing respect for the First Amendment, fostered on University Campuses, allowed for the public shaming and social destruction of those with opposing views. Soon, people who couldn’t even tell you who Hitler was were calling anyone who disagreed with them Nazis. The Democrats did nothing to tranquilize this tiger. Instead, they went out, bought a saddle, and tried to ride it.

By 2020, the middle ground in American politics, already in danger for the last twenty years, was gone. There were only two tribes, ready for war.

CAUSE THREE: CONVINCE THE MEDIA TO “TAKE A SIDE”

One insidious effect of the growing Millennial influence in society was their infiltration of newsrooms. Coming straight from university campuses where serious debate on social issues was verboten, they were at a loss to understand ideas like “equal time” and “right to respond.”

Now, venerable old news organizations such as the New York Times began a hard port rudder into agitprop. “Problematic” op-eds were cancelled. Stories which might cause embarrassment for Democrats (Hunter Biden) were killed quietly, while those which might cause difficulty for Trump (Russia Collusion) were ridden till their legs broke.

Reporters began debating the President, rather than asking him questions. Reporters stood in front of scenes of burning city blocks to characterize the scenes as “mostly peaceful.” Outright lies began to sink into reporting, allowed to pass because they were acceptable lies.

The media became adored by one half of the country, who saw them as a trusted part of the resistance. The problem with this is, that such an obedient and faithful media will never tell you anything you don’t want to hear. For the other half of the country, some of whom were already somewhat sceptical of objective reality, such as “vaccines prevent disease,” or “the earth is a sphere,” they retreated into an increasing paranoid bubble of “alternative reality”.

When Alex Jones becomes a more trusted source than CNN, you have to ask: Whose fault is that? Does CNN bear some of the blame?

Increasingly, one side believed they were on the side of the angels, and the other believed that, whatever they did, they’d be demonized. This would have serious ramifications once violence became a routine part of American politics, which it would following the death of George Floyd.

CAUSE FOUR: ENCOURAGE AND EXCUSE VIOLENCE

The riots, or “spirited demonstrations,” depending on who you ask, that swept America following the death of George Floyd in police custody, were hardly the first time violence became an integral part of American politics. After all, this is a country with one civil war under its belt.

This time, the violence began on a small scale, even before May 2020. Trump-hating gunfire at a congressional ball game. A white supremacist running his car into a crowd of BLM protestors, followed by a maddeningly equivocal Trump response. Maxine Waters encouraging protestors to publicly harass Republicans and their children. Doxing and smears on both sides.

But, once violent protest was legitimized by racial rage, and implicitly encouraged by Democratic Mayors, City Councils, and George Soros-funded District Attorneys practicing catch-and-release, the countdown began for the fatal event of January 2021.

Political violence was being actively encouraged and indulged. Like Senators of Ancient Rome, politicians were praising their mobs, encouraging them to keep going, excusing their excesses. The media participated by actively attempting to downplay violence.

Cities like Portland, Seattle, and Oakland hobbled under the incessant violence. New York and Chicago saw their murder rates skyrocket as their demoralized and defunded police retreated under fire.

All the while, COVID-19 provided an easy excuse for the chaos in the cities. It also provided a contrast between enforcement styles:

Like Malcom McDowell in a Clockwork Orange, tied to his chair, the Trump supporter watched this nod and wink towards anarchy with increasing rage. They watched as obvious leftist violence was blamed on invisible “far-right” instigators, and as violence was excused as a legitimate exercise of First-Amendment rights.

What’s good for the gander, is good for the goose. Some supporters of Donald Trump clearly came to this conclusion. If they can fight, and gain traction for their causes, perhaps we ought to as well.

Trump never helped matters with his inflamed, and poorly considered rhetoric. A more thoughtful man might have held back. But when one puts one’s 4AM thoughts on Twitter, one is not seeking wise counsel, but flames.

Already distrustful of the media “Resistance,” Trump’s supporters did not believe it when they were told that he had lost. They seized on every misstep and foolish act by the Democrats as evidence of a more heinous plot. It had to be, after all! As if they’d tell us!

Primed to disbelieve their own eyes, prepped to fight a Second Civil War, seeking glory in the own pathetic fantasy lives, the mob responded to their leader’s cynical, delusional call to the Capitol. The rest is sad history.

Your violence cannot be good while mine is bad. To think otherwise is to commit the fatal act of undermining democracy.

CAUSE FIVE: WHEN YOU WIN, PURGE THE OPPOSITION:

Despite some weak calls from Biden for “healing,” there is precious little evidence that he, or anyone else in his party actually believes in reconciliation with the other side.

The overwhelming message from the Democrats has been a vengeful, triumphalist one. AOC speaks of making lists of Trump supporters in an abashedly McCarthyite manner. Journalists want purges. Celebrities want blood. And that was before the Capitol was stormed.

Unless the retribution is carefully restricted to those bearing legal blame for this week’s violence, blood is certain to follow. Trump’s supporters will not simply disappear. If shot at, they will shoot back.

Without a drastic dialling down of rhetoric on both sides; without a realization that nobody can ride the tiger of political violence, and without a clear-headed re-appraisal by the media of their true role in society, then America will flatline soon. There will be no 2024 election.

A house divided against itself cannot stand. This house has never been more divided since the 1860s. On that occasion, the United States came within a hair’s breadth of extinction. In my opinion, the odds of survival are less than even.

So, can we have your liver, then?