by Karina Thyra about a month ago in trump 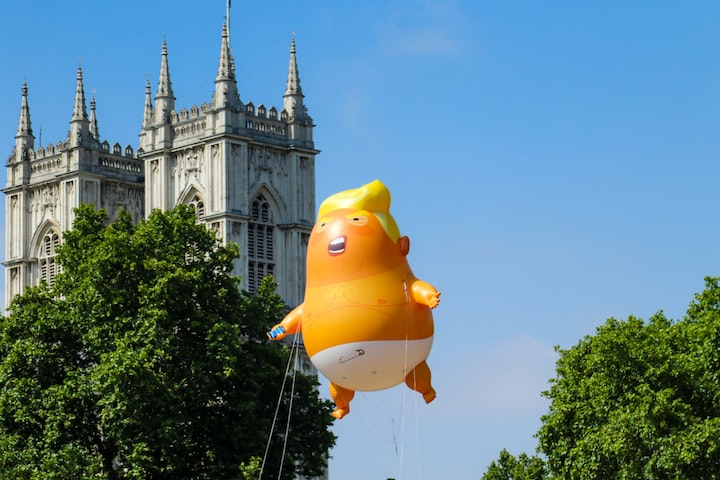 Photo by Dave Lowe on Unsplash

Representative Hakeem Jeffries (D) said it best . You are a 'living, breathing, impeachable offense'. I didn't know who you were until the campaign period of 2015. My first introduction to you was through a meme - and it was a gerbil.

You were also a forgettable cameo in Home Alone 2 and I'm glad Macaulay Culkin agrees to sentiments to have you digitally removed from that film, even if just to spite you.

I'm not American so I'm not directly affected by the politics over there. And I didn't think our American brethren were foolish enough to vote for you in 2016. Oh, that's right. They weren't. You lost the popular vote, even then. You are someone, who, even if I didn't *know* who you were, you have 'Backpfeifengesicht'. I had that reaction when I first saw you. I hadn't even heard your voice yet. I didn't even know the horrible reputation you had. However, it seems that the Backpfeifengesicht energy incurred through years of grifting precedes you.

It was disgust at first sight, Donald. That's how I felt about you. And for some people to say you are really "attractive", I think they were either paid or are deluded. You've got awful, patchy foundation and bronzer (props to the makeup artist for always making him look like his personality), and your hair is as fake as your personality. You would've looked less ridiculous if you accepted your whiteness, shaved all of your hair off, and possibly grow a beard (or not).

This would be a really long letter if I wrote every awful thing you've done as President - from misinformed/ignorant statements, cruel policies, up to the grifting. There's just too much. Also, The New York Times did that for us. I never really liked any U.S. president before you, but man, you're like all of your predecessors' horrible traits made love to Andrew Jackson and vomited a spawn. You and your cult of MAGA zombies are why some people would now think that pro-eugenics arguments make a compelling case.

You know Donald, I had a dream, once. It was about you.

I had this dream back in July 2020, and I shared it with a friend who also appeared in that dream, and with their permission, I'm sharing it here and now, too. It was one of the most terrible dreams I've ever had, and what most people would consider 'nightmares', I consider lucid but exhausting dreams. I often forget about 'nightmares'. But the one dream I had about you was so bizarre, I really wanted to sucker punch myself because, in that dream, I ended up understanding your reasons even if I didn't agree with your methods. These are the screenshots of that time I told my friend about it:

In that dream, you even went so far as to praise Sen. Bernie Sanders, saying that you liked him which is why you didn't want him to be president. Because someone as uncompromising and as principled as him would be 'eaten alive' by the 'corrupt Democratic Establishment'. You said you wanted to expose America's gravest ills for all the world to see - the system that allowed the rise of personalities like yours. And I agreed with that sentiment, because the American system has mostly (if not always) been against the general public. To look up to America - to emulate it, to gloss over the sordid reality of what it is - I've always had a beef with that. That's partly why I even gave Duterte the benefit of doubt; America's greatness has always been overstated. For many, it seemed like a land where all dreams come true, forgetting that nightmares are also dreams.

In that terrible dream I had about you, what I felt when I woke up was the most appalling thing. To actually 'understand' your reasons even if I don't agree with them.

That dream came true in a way. You truly exposed the awful sides of America, that it was becoming hard to ignore them. You're a case in point on how a supposed magnanimity could sway the population who have never practiced critical thinking. I pity the people who were victimized by a greedy system, that they grew up to be so closed-minded and contemptuous; they became susceptible to corruption disguised as religion or politicians like yourself.

I don't pity the hateful people who had the privilege of resources to enrich their knowledge but instead chose to be narrow-minded that they come to hate any opinions opposing theirs. Whether that sort of entitlement comes from fear or pain, I don't know. But obviously, their capacity for empathy and their critical thinking faculties have been stunted despite their more privileged upbringing.

I hope that the dream I had about you would be the first and last. I would never want to meet you, let alone have a conversation with you over burgers or while waiting for press to arrive. I had conflicting feelings about you because of that dream, but knowing that you spawned children (with the exception of Barron, there's hope for him yet) that grew up to be as contemptuous as you...

... Then you Donald J. Trump, are a failure as a businessman, celebrity, partner, and parent. If your one goal was to expose the dark underbelly of America (as the version of you in my nightmare did), you would've been successful. Alas, in reality, your plans weren't a four-dimensional Chess game. You can't even pull off a good long con, so you're just as good a conman as you were president - which is not at all.

P.S. You never won the popular vote either time. The electoral college is a sham and why in hell should the people's will be overturned by a select few, I would never understand. Is that how democracy works over there?

P.P.S. Good riddance. You might even fulfill your promise to 'make America great' for the first time, because now, more people have at least started to give a damn about the world they're living in and the legacy they will leave behind - both in action and in words.

See all posts by Karina Thyra →