by P.E. Lihou 2 years ago in opinion

Funding Unavailable for Those With Pro-Life Views

As applications for Summer Student grants are being submitted, many potential employers are concerned. A new mandate from the Canadian Liberal government has made it mandatory for those receiving the grant to agree with their point of view. This has caused concern and disappointment among many people who wish to hire temporary employees, specifically students for the summer months.

This new rule has come shortly after Trudeau announced that all future and current members have to vote pro-choice. It also comes after an anti-abortion group received $56K from a Liberal MP, in addition to a walk out during a Status of Women meeting when a pro-life MP was chosen as chair.

The part about this rule that has many Canadians worried is the fact that it attacks their thoughts and opinions, in addition to their religious beliefs.

In 2016 there were 70,000 Summer Student jobs planned and many of them were in non-profits and business with less than fifty employees.

Many of the non-profits that use the Summer Student grants are churches and religious organizations. Many of them do not agree with abortion. This new rule states that they will not be able to receive funding for their employees, which can help fund up to 50 percent of the employee pay. This fact limits the number of jobs available for summer students, especially students that are in religious studies.

The section of the grant application is stated as follows.

“Both the job and the organization’s core mandate respect individual human rights in Canada, including the values underlying the Canadian Charter of Rights and Freedoms as well as other rights. These include reproductive rights and the right to be free from discrimination on the basis of sex, religion, race, national or ethnic origin, colour, mental or physical disability, sexual orientation, or gender identity or expression."

Summer Student Grants Limited to Those Who Agree With the Liberal Pro-Choice Stance. 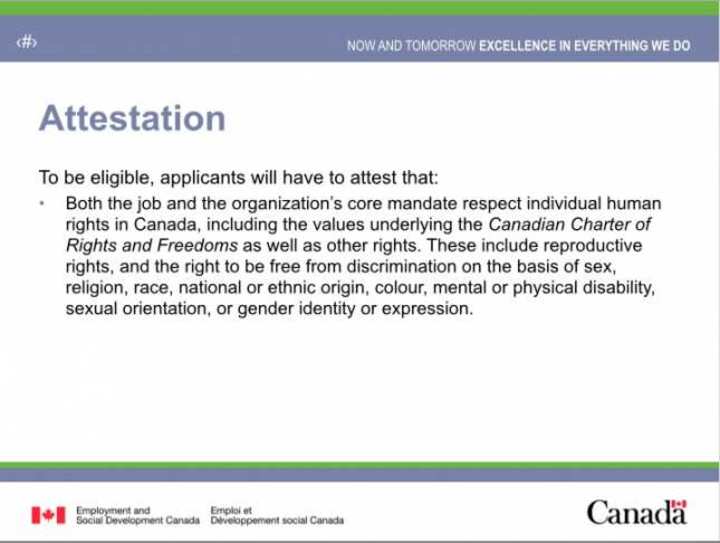 This new rule in the Summer Student grant application has people worried because it infringes on their religious freedom and freedom of opinion.

Brad Trost and MP for the Conservative party was one of the first people to bring this to the public. In a video he denounced the Liberals, saying they are discriminating.

“In practical terms, this means you have to be with the Liberal Party position on abortion, gay marriage, transgendered rights and all sorts of legislation… otherwise you will be an ineligible employer for this program,” Trust said in his video.

The Liberal government is standing on a line, where it may soon be illegal to disagree, but isn't that what makes democracy great?

Earlier in 2017, the Liberal Party essentially said that MPs within the party are to hold the pro-choice stance as well. Long-time Liberal MP Lawrence MacAulay, who had previous voted against the Liberal agenda and voted against abortion, is said to now be voting along with the rest of the party.

One thing that the Liberal party needs to understand is that those who oppose abortion are not terrible people who hate women. Some of them are women who love women but hate to see a child terminated.

It appears that the Liberals are trying to lead a cull to eliminate those who disagree with them. In September 2017, the Liberal MPs walked out of a status of women committee meeting because the Conservative Party picked a woman who has made pro-life comments in the past to be committee chair.

Rachael Harder, the woman that the Conservative Party wanted as chair, has been know to hold the pro-life stance. She had told the Campaign for Life Coalition that she wanted to introduce laws that would protect “unborn children.” The MP from Alberta said that she only supported abortion in situations where the life of the mother was also on the line.

The Liberals have been preaching acceptance and tolerance are not accepting and tolerating those who disagree.

This issue is not an issue about abortion. It’s an issue about opinions. If people cannot have varying opinions in a democracy then where can they have them? The Liberal Party needs to be put into check.

If you want to join the fight against discrimination sign the petition.

Through words we can disagree, argue and communicate.