by Anton Black 5 months ago in fact or fiction

Many people refuse to be vaccinated or do not receive their second injection, putting the goal of herd immunity at risk as vaccination efforts continue to expand worldwide. 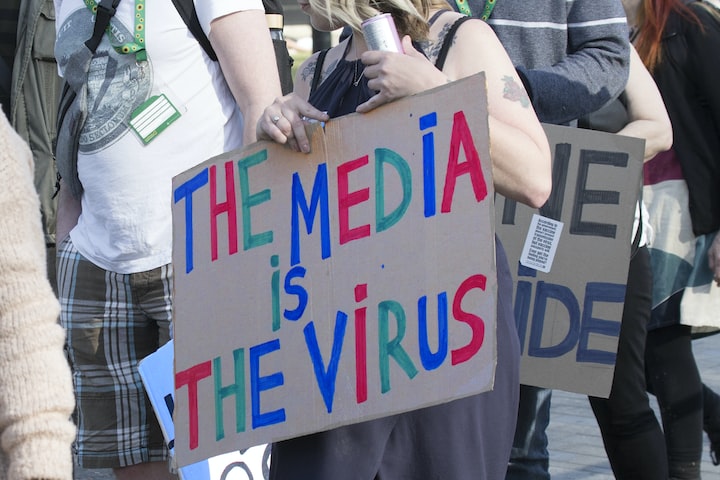 Photo by Trey Musk on Unsplash

Outside the BBC's White City studios in London, anti-vaccine protestors clashed with police.

Over the past few weeks, Official Voice, which defines itself as "a collective forum of like-minded truth seekers," has been running a campaign against the life-saving Covid vaccine deployment on the internet.

Their main objections, according to Brown, were vaccine passports and the mass vaccination of youngsters.

On social media can be read: "The media is the problem. The lies will end."

There's a possibility that this is why the former BBC HQ was targeted. However, Television Centre no longer produces specific programmes.

Similarly, the group marched in Parliament Square on July 19 to demand an end to Covid restrictions, even though virtually all restrictions were relaxed on that same day.

Experts have studied the concept of science denial over the years.

Millions of individuals, obviously influenced by a handful of fools, have opted to put not only their lives at risk but also the chance of defeating the epidemic. As a result, they're violating the social rules that keep society functioning.

What have we learnt after millions of vaccinations have been administered?

As a matter of first importance, they function incredibly well: no vaccination is 100 per cent effective, but those produced for COVID-19 get very near to that mark. Most vaccinated people prevent the disease, and those who do get it exhibit no signs or consequences. As a result, unvaccinated persons are now responsible for the great majority of COVID-19-related fatalities. This is a reality that deniers cannot explain. It should be enough to convince vaccination deniers to give up their crazy beliefs. The fact that vaccinations no longer challenge hospital capacity is another proof.

If someone is foolish enough to believe that placing a teaspoon against sweaty skin will make them magnetic, they should consult a psychotherapist. Because the vaccinations come in multi-dose vials, and they don't have microchips either.

Another common misconception is that vaccinations are experimental. Instead, they are an extraordinary success achieved in record time, proof that science can solve our most complex problems, and a remarkable advance for when they will be used to cure all kinds of diseases, including malaria, cancer, and mumps. We're talking about technology, messenger RNA, which is shockingly easy to mass-produce and will transform the world as we know it.

Why would someone resist technology that has the potential to save their life?

New types of vaccinations will be available shortly, which we will almost certainly be required and provided alongside others without causing any adverse effects. In the UK, some people utilise sites like Yelp to identify pubs and restaurants that require evidence of vaccination, while an increasing number of companies are considering mandating vaccinations for their staff. Denialism must be combated, and anti-vaxxers must be humiliated if necessary. This is already happening: a judge dismissed a case brought by 117 workers of a hospital in Houston, US, challenging the hospital policy over its COVID-19 vaccination mandate, and went on to drop their claims one by one in his judgement.

It's a fact of life that denialism's arguments always turn out to be wrong. Yet, time is precisely what we lack in the case of a pandemic. Denialism must be confronted as the uncivil and unacceptable behaviour it is.

I write about politics, society and the city where I live: London in the UK.