by Delila Reddit ( Yvette Louise Melech) 13 days ago in trends

The Show Pitched With A Hitch 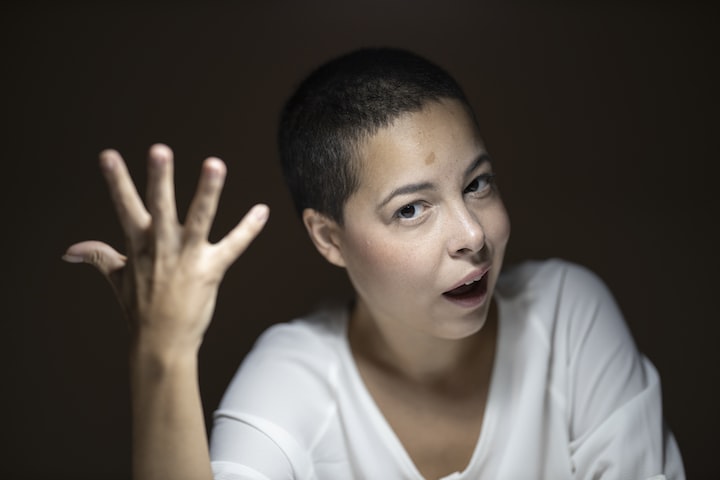 The year was two thousand and thirteen thereabouts give or take a year. Having lost count. Somewhere In the midst of my mudding overload lies a glossy brochure with my line. I drew a fashion line for a film I have written.

In actual fact I had no idea I could really draw. All being my father was an artist who could put paint to canvas, like a chef who kneads dough. In the midst of an uprising of an art company I launched. Back in two thousand and twelve. The creation of my company was to help artists get off the ground in London town.

Things did pick up a fine tempo. They began to move. In other words, faster than one could imagine. Suddenly my London pad then, which was a double layered hole, I 'd hitched in a Bloomsbury. A point of distinction. Look upon the map of London town, if you are none the wiser. London is quite confusing being so vast. I forgive you out loud for being blind to thy little eye. I still get most confused myself, even now. Let alone while I was suddenly overcome by many an artist visiting my pad.

This is how I did it. I started an art company. I was blessed to have grabbed a jolly London double layered pad. Two floors with a garden. In-fact this property was the one London property I'd had peace of mind within. A complete contrast to the usual London property agent brigade. They are rats out on the hunt who tear would be tenant's to shreds. Before you even get in the front door. Deposits that stink to high heaven, in numbers which would send you dizzy. Upon hitching this property, which coincidently, was number twenty -three. Life swung me around a new corner. The owner was soon bunged in jail for some kind of fraudulent off the road deal.He however owned properties worth over a pound and a half in big numbers. Bit more than the old shilling. Henceforth we were left alone in peace and quiet for a change. One of the owners merry men collected our rent bang on the dot. On time.

This story begins with the tone of ' cutting threads'. Due to one arty magazine pushing my uprising art project onto magazine shops shelves. I was on the front cover too. Bet you didn't know that did you ? On grabbing the bull by the horn. Having worked from dusk till dawn. My art company was helping artists. One day I had to think about myself due to being bombarded by offers. I had an idea to create a fashion line with characters from my book/film story. The film, book story is now in a fast moving pipeline.In other words create my own line.that my characters would wear. This idea was long before I ever arrived at Cannes fashion show floor.

I hitched a pitch with a Cannes fashion show co-ordinator who grabbed me by the tails. Putting pen to paper. I began to draw up outfits for my characters. Everything happened so fast. Suddenly the characters in my story came to life. I was dressing them up myself. A date was set for a show in Cannes. This was long before I actually finished the script for the film. Now this creative story is on quite a different level. I have producers from Los Angeles offering to market my film for me . In all due effect the story 'Doll In The Cupboard' first lay her first seeds in a way I had never imagined.

Speaking as an artist one never really knows what one is getting oneself into. If you are a true creative, the freedom to allow other openings is a part of the game of art. There is no way one can pin to point the journey. No matter how well a plan you think you have. Speaking as a poet now herewith. Quite often, I begin a poem with a thought, then it swings in another direction yet still with a hanging thread. The one thing one has to learn to do in creativity is knowing when to cut the thread. Going with the unknown though a vitally important factor. Unfortunately, yet, also a most beautiful part of being a creative being is never really knowing one's cut off. More often than not once you are in a ' flow' point. The journey is taking you, rather than the other way around. This is one of the unbelievable wonderful sides of being an artist. Plus one some human-beings cannot live by, which is why we are artists/ writers after-all.

Trying to be practical. A shape does begin to come into one's playground, even though the shape can change. Creativity becomes more flowing. The more one plays in life. The more unknown openings happen. The bee line to the nest though, be warned. Is this fact, one can suddenly find many bees heading in the same direction. One needs to be good at driving bumper-cars, as one did in a fairground. For some reason, once one lets the hook out in the world from art, bees fly out towards you in full force. The beauty of this is one feels like a star overnight. Yet, one knows the road is a long one. I believe the mindset of such unusual human-beings open doors for others to ride to. There is a particularly attractive strong pulling force that attracts people, when one is being creative. Even if we don't know where we are actually going. One remembers in hindsight events when we were children, of games, or adventures. I strongly believe our childhood memories have many connections to our creativity, as we mature into adults.

I remember when I used to bump into street- lamps lined up along the road, when I used to dance down the road. My mother used to have to call me to slow down. I never really noticed the lamps. I notice them more nowadays though. I recognise how beautiful those Victorian lamps are that I used to bump into. They are still there. I wonder if they remember me ? A London street I used to dance down comes to mind from the ' Notting-hill ' side of town.

Lights. Camera. Action ! The show begins. Suddenly before I could say ' time for tea', I was sitting with stars of stage and screen. I was watching with my own eyes, my own collection waltz along Cannes lit up floor. Models of stick thin kinds floating along wearing my book, film character pieces.

In a trance I was hypnotized. I hardly noticed the stars surrounding me. Both up in the sky, or the one's by my side. Designers in this stream making their name. Obviously I was in another cloud. Thinking like a film-maker on set. My scribbled dribbling pencils had been transformed. I cut sewed and hemmed by another spread. I'd used all kinds of scissors. This had been a fast 'Do It Yourself Job'. Cloth I'd laid over my Bloomsbury city floor. Transformed into fashion show duets. I wondered about different senses to eyes of a film audience. I was thinking inside another hemisphere. Inside another zone. The stitch didn't matter, if I required another inch here or there. We still use many old hat measuring tapes in England. Converting into metrics something we English have become accustomed to. Metric conversions we are adjusting to very slowly. We do not turn our noses up to french lines. I think it must be, because we are still so attached to our Victorian bread and butter. Many productions unveil our pride over our history, ' The Crown ' a recent spectacular example of our English pride.

See you on the dance floor wearing my character line one day perhaps ? I caught the producer on time just the other night. A London date. I nearly got stage-fright. The big question is? Which character would you choose to be ? There's is always a first time to transform yourself into a fairy Queen, or ' Doll's ' vampire King. Maybe you will transform to a simple ' Doll ' that's me. I'm in the magic box though, you may never return once you step within.