by Kathryn Zurmehly 10 months ago in army
Report Story 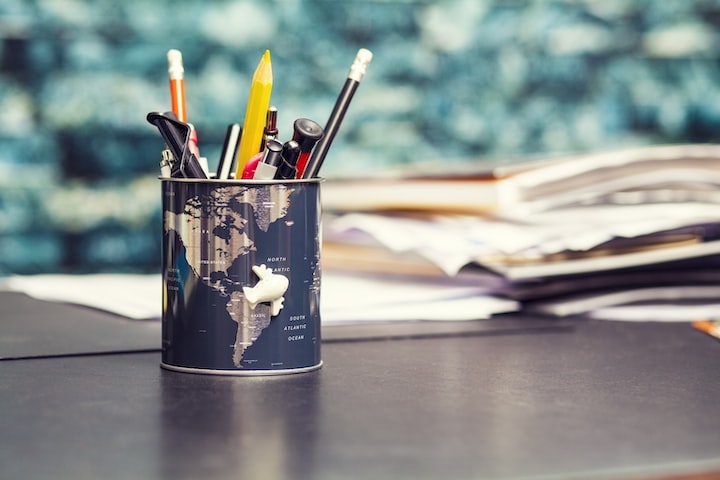 Photo by Frank Vessia on Unsplash

This is The Pen Story.

It’s an Army story. It’s actually my Army story, the one I pull out when the occasion calls for an Army story from my five years as an Army officer. My career was memorable, but mostly only for me and I can’t say my telling of its memorable bits works for everyone, but this one I can get to work most of the time.

All names and locations are changed for the protection of all involved. I reserve my right to be both hyperbolic and honest by turns. I’d also like to preface it by stating that we were all losing our minds.

We were deployed to that old classic, Atropia West, though with our job it was not that old a classic and we were caught between EUCOM and CENTCOM working eight-hour shifts with 300 people in one building under General Order One. My battery’s site, where people actually did the unit’s job, boring as it was, was on top of a mountain, half an hour’s steep drive from the Life Support Area. I was the battery XO and I hated my job.

Once a week, we had a battery training meeting on site, since one of the platoon leaders would be on shift. We held it in a tent on site using furniture that was scrounged from other, more useful tents as needed. I believe one of the platoon sergeants started to opt for sitting on a bucket at one point, possibly to protest being alive while on this deployment.

Battery training meetings are weekly training updates to make sure everything is on track, from supply to training to maintenance to medical status. They’re boring at best and stressful most of the time because it’s here that what we’ll call personality quirks begin to shine through the cracks of civility. On deployments, especially that deployment, civility was mostly just made of cracks. Sanity was wearing thin across the board. Trauma can no doubt do that, but monotony and close quarters do something not good to a group’s mental health.

This meeting was on a normal day for weather, neither snowing nor hot. We had managed to get up the mountain this time without it sliding backward down the perpetually muddy road at all.

Not this time, or at least not that I remember because the thing that happened at the end blots it out.

Every meeting ended with asking the commander if he as anything to say. He is the boss, this is his show, he is the one who owns it all. So I ask the commander, Captain Willis, “Sir do you have any comments?”

Usually the answer is no. We all do this every week and we all see each other every day. It’s not a very dynamic job while the world’s not ending.

Captain Willis put his hands on the table and looked at them. He was quiet for a long time.

We all tensed. Did we forget something important? Was there an important operations order put out that I missed? Did we miss a due out that wasn’t discussed? Did the battalion commander say something? Did something happen back home? Did some soldier have a negative life event? Is, heaven help us all, a piece of equipment missing?

“Someone,” he said, slowly, “has been stealing my pens.”

There was no reply.

There was a reaction, though.

The First Sergeant’s face has gone very carefully blank. Chief was just staring at Captain Willis over his coffee. One of the platoon sergeants was trying not to laugh by staring a hole through the tent. Another, the one sitting on the bucket, had a slight smirk on his face. The third was visibly confused. The orderly room NCO had her head resting on her hand and wore the expression of a woman who has had all her low expectations met. One platoon leader was pretending to very diligently write something in his notebook but his pen isn’t moving. The other gave Captain Willis this bewildered and offended look. The last, who was sitting across from me, had his head under the table because he couldn’t hide his laughter, but he can silence it. I might have been gaping in shock.

We can’t look each other in the eye because then it will be all over. We will laugh and not be able to stop.

Captain Willis needed no reply, however, and apparently took no note of the reactions at all. “I brought a whole pack of very expensive, nice pens with me and put them in a cup on my desk in the orderly room. Black gel pens with cushy grips and retractable tips. Now they are all gone. I told Soldiers they could borrow them if they needed them, but now they are all gone.”

I’m not really sure how I was supposed to respond to this. It’s largely understood in the Army that you could always need a pen, so Soldiers tend to take them where they can get them. Pens constantly get lost, ‘borrowed’, or accidentally washed with your uniform and ruined.

Captain Willis slapped his hand on the table. “I want them all back. Put all my pens back where they came from. I expect to see them there by the end of the week.”

Everyone had, by then, sufficient time to recover their assorted semblances of military bearing and just sat for a moment, blinking at him. “We’ll get on that, sir,” the First Sergeant said. The meeting adjourned very rapidly after that and everyone bolted off to their assorted social circles- battery control station, command post, and smoke pit.

The next morning, I was in as usual before Captain Willis. Due to the limits of our footprint size, everyone in battery admin worked right next to everyone else with maybe a filing cabinet barrier between desks. I was poking at some slides, the whole pen lecture gone from my mind.

Captain Willis came in. “Good morning,” he said and got the grumbled reply of all present. He turned to his desk and smiled way too brightly for that place and time and General Order One. “Oh! They brought back my pens!”

I turned to look. With pens being such a hot commodity, most Soldiers have an eclectic collection. There might be a uniform standard, but I was an officer, and I am also out, so I do not care. They end up using hotel pens, promotional pens, store-bought pens, clicking pens, pens with caps, pens with missing caps, the ubiquitous black Skillcraft pens found in the Army, any random damn pen.

Next to me, the orderly room NCO had her head down on her arms and was shaking from laughter. I was a bit sad that I didn’t get in on this.

Captain Willis sat down, quite pleased that all the troops had obeyed him. I was swapped to the operations desk night shift shortly after that and he left for his next assignment around the same time. I wonder if he took his pens.

I am an Army veteran, dog-lover, and writer of many things. I'm not looking to change the world, just build a little bit of something good, something that connects to hearts- and add some cash to my whiskey and books fund.

More stories from Kathryn Zurmehly and writers in Serve and other communities.