by Subham Das 2 months ago in army

This is a story to highlight the casualties of terrorism and the weight of the words 'potential terrorists.'

I tilted the assault rifle towards the left and turned the small notch at the rear end.

"The building at 12 o' clock is our zero ground. It is the base of all terrorist activities that has been going on. We have orders to shoot on sight. Now, Mark and Ryan, you flank from the left. Me and Connor will bang through the front. Godspeed. Let's move."

We hurtled through the mud using the darkness as our cover. I followed Mark's lead and stopped right outside the left gateway. It was closed from the inside. Connor and Terry already at the front door. Terry lifted up his right hand while looking at us. Mark placed charges all over the door and stepped aside. I put my night vision on, took position with my finger ready on the trigger.

The door blew open with a deafening sound and both of us rushed in swiftly scanning the room for targets.

"Two on the right, three on the left. Take the ones on the left!" Mark screamed. It was a cue for our boys standing outside who now burst open the front door and joined in the killing spree.

The people inside were obviously stunned by this abrupt string of events. Some of them fumbled for the guns lying on the table while others let out a call for help. I shot one right in the head as he was reaching for the Kalashnikov on the table. The second one was trying to make a run for the door. He received two bullets in the back. By this time, the third one had already found a semi automatic from the table and was aiming it directly towards Mark.

"MARK, look out!" I shot the man right in his chest moments after he managed to pull the trigger. The bullet pierced through Mark's stomach. He shrieked and crumbled on the ground. The other targets had been nullified. I ran towards him, grabbed the safety kit from my backpack, and tore open his vest and shirt. The bullet had moved in and out through the side and he was bleeding profusely. I started treating his wound.

"How does it look down there?"

"Just a flesh wound. You are one hard man to kill," I smiled.

"You two stay here and collect the evidence. Me and Connor will sweep the area and check if it's safe out here," Terry said while leaving the room.

I pulled Mark towards a corner of the room and laid him up against the wall. The room was a huge one. I walked towards the other end where the men were sitting. There were blueprints, order receipts, pictures of eminent personalities lying all around. I put the safeties on and kept my rifle aside. These were all evidence that the terrorist cells were planning on something huge. They needed to be stopped.

As I started rummaging through the documents, I heard a faint scratch. I looked up. Something was under the round table beside Mark and it was moving. I couldn't see what it was as this table cloth was completely shielding it from view. Mark heard it too and was trying to reach for the table cloth. I picked up my rifle, aimed it at the table and gave a nod to Mark. He pulled the cloth in one swift go and threw it away.

There, covered in dirt, with a few scratches here and there, was a girl lying crouched with her face buried in her lap. She would hardly be 5 or 6. As she lifted her head, we could clearly see the fear, the uneasiness in her eyes. As she looked around, her eyes were fixed on a dead body lying just ahead of Mark. It was like her worst nightmares were somehow materialized and were lying there waiting for her. 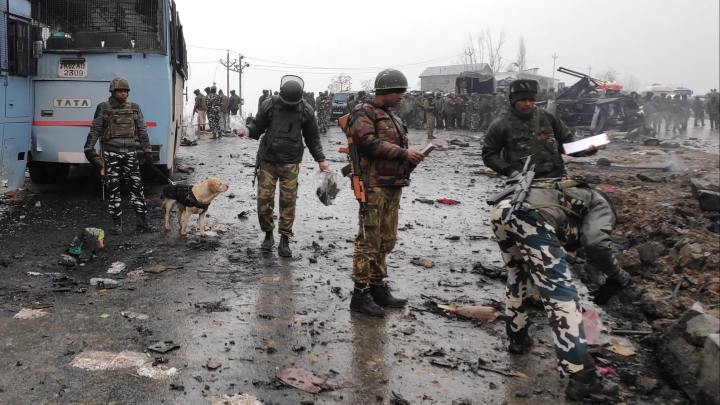 She crawled out and sat near the head of the man whom I had just shot a few moments ago while he was reaching for his gun.

"Abbu," she said softly and laid her head on the man's forehead.

"Shoot her, Ryan. She is a potential terrorist."

"Are you insane? Look at her! She doesn't even understand what's going on."

"We have orders to shoot everyone related to his side. EVERYONE. That includes her."

"Well, I'm not gonna. You keep your orders with you."

By this time, the girl had straightened up, rubbed her eyes vigorously and sat there still. I started collecting the evidence again.

"RYAN! Help! Shoot her!" Mark screamed at the top of his voice.

"For the last time, man, I'm not gonna shoo-", I stopped abruptly. She had unzipped her jacket while sitting there, completely revealing a belt tied around her waist with two M67 military grade grenades attached to it. She was holding one of them and was trying to pull the pin out. She wasn't holding the safety lever which is why she wasn't able to pull it out just yet. The mechanism wasn't quite clear to her, so she tried everything to pull the pin out.

"Oh God," I took my rifle, aimed it at her heart, and closed my eyes.

"Forgive me," I pressed the trigger.

Oh I had forgotten to turn the safeties off!

I fumbled for the notch, found it and pulled it hard. I took a solid aim once again. The girl already had the safety lever tightly clutched by then and was prepared to pull the pin out. She had her thumb tightly wrapped around it. One pull and it would be out. I fired a shot just as she pulled with as much force as she could apply. The bullet hit her round and square and she let out a sharp cry before falling to the ground. The pin went flying.

"GET OUT OF THERE!" I cried and ran towards Mark. He was unable to move due to the shear pain in his stomach. He tried to crawl away from the girl as far as he could. I ran but not fast enough. The explosion was blinding and deafening.

I still remember the two words that took Mark's life that day. 'Potential terrorist.' Was she a terrorist? She murdered my friend in a completely unprovoked action. How ironic it is to call HER a potential terrorist when WE were the ones to barge in upon her family and slaughter each one of them. I shot her father that day and yet, she somehow came out to be the potential terrorist.

A little girl of 5 doesn't even understand what terrorism is. She only understands what she sees and she saw a group of armed men break into her home and murder her family. We were the terrorists to her. Can we blame her for what she did? The world is cruel. She was not.

It wasn't her who murdered Mark that day. She was not a potential terrorist. She was a potential victim as are the millions of people who are out there today. We wage a full fledged war on terrorism but we always miss out on the casualties. The casualties on their side, so to speak. A potential terrorist is applicable to all and not just the ones related to terrorists. If I had acted according to the mission briefings exactly and shot her right as I saw her, Mark would probably be alive today, but Humanity would be long dead by then.

If you liked this piece, please support me with a gift through the option below. Thank you and have a nice day!

Movie and TV geek. If you love Superheroes, fictions and animations, then I'm your best friend. Follow me on Twitter @lord_danton for more intriguing posts.

See all posts by Subham Das →