Memories of the Windrush

KMM
by Kwame MA McPherson 5 days ago in history 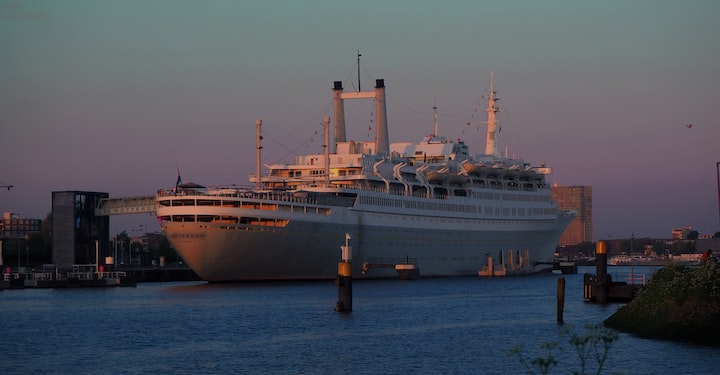 It was big with an off-white colour. Long with rows of small round portal for windows and rust speckles blemishing its off-paint as if a battle of hues was taking place where the vessel’s own history had left off. A dark strip, running the length of the ship, indicated the gangway. While high above me, two smoking black-painted stacks poked from the ship’s middle or its amidships - according to the shipbuilder’s definition - making the vessel seem even higher; its tall structure out-of-place on the edge of the capital’s harbour. The day was already hot. The blazing Caribbean sun as merciless as the stewards on the pier shouting at the top of their voices in the melee and mayhem. The smell of the sea assaulting my nose and me thanking God that I never once had to ditch in it.

Kingston, was behind me, the bottom of King Street a short distance away. I remembered my first time passing through the capital, fascinating me then as now with its busy streets; streetcars and vehicles of all sizes competing with the many country people who gravitated towards it in search of work or any other opportunity. It was growing and my own little existence in the Portland Hills was a quiet comparison until the call to arms came and I realised that Kingston was just as small when likened to the big cities in The Mother Country - London, massive, ugly, a spectacular place of history, tradition and employment and the various second cities like Birmingham, Manchester or even Glasgow, miles bigger. I’d been in awe of The Mother Country on that first trip and after basic training, when she was screaming for our help. She’d been in trouble and needed the assistance of her offspring – her colonial children. So, I upped, leaving what I knew and grown up with, behind.

Answering the clarion call, I remembered when, at times, in my fighter plane, my finger on my gun trigger, I could still hear the sounds of Portland as a woodpecker’s beak pummelled some faraway tree, its staccato bill destroying the bark as my own machine gun bullets tore through a German plane’s fabric; any thought of the human in the machine, lost in my pursuit of another target. Yet, it was while watching the fiery plane plunge to earth that I’d miss Portland as I recalled rummaging her various fruit trees, swimming in her cold rivers and kissing my first crush, Mitsy – my over-the-Nonsuch Valley neighbour. In my zooming plane, I’d shuddered when I’d witnessed, for that first time, my first bullet-ridden, burning, diving craft and prayed that’d never happened to me and as I flew through the air, I puked until there was nothing but a rasping renkness emanating from my mouth. Funnily enough, that never occurred when I was in the Portland bush, shooting down some poor bird with my slingshot - my bingy.

I stared at the ship.

Though high, it wasn’t as magnificent as some of the massive warships I’d flown over and this one, I’d heard, was once German, now commandeered by the British. The spoils-of-war and all that. The irony. From shooting down the enemy to almost cavorting in one of their vessels and embarking on another adventure. But I’d no care for the present owner, I was just excited at returning to the Mother Country like some of the other four hundred or so Jamaicans and spattering of Polish refugees; a few making the trip for the first time. Apparently, the Polish women had been given safe haven in Jamaica and they now wished to return to Europe, England being their first step.

A group of smartly-dressed RAF airmen wearing their smart blue/grey service dress strolled by, laughing at some joke. I nodded at the nearest one; he returned my salutation. My own uniform was neatly squared away in my dulcemina. The war, a recent, distant memory. I’d been involved, like so many other subjects of the Queen; we fought, at times got caught, were imprisoned, tortured, starved and yes, died. In the air. On the ground. On the sea. We died. It was a close call too, the across the various theatres, the Axis Powers had almost annihilated The Mother Country but with our help, she withstood their onslaught - at a very high price. I’d lost too many friends to count and still there were the many thousands more I never could possibly have known too. Now, here she was again, reaching out to us, asking for our help to rebuild her once-magnificent country.

On the quayside, the throng around me grew as had the excitement buzz. Kingston’s pier filled with drape-suited men, attractive women in their long or short sleeved blouses and skirts falling below their knees; a few children darted in-between adult’s legs, their parents shouting after them. Relatives bid farewell to loved ones. Kisses. Hugs. Husbands. Wives. Brothers. Sisters. Uncles. Aunts. Girlfriends. Boyfriends. Lovers. Children. Soldiers. Sailors. Airmen. We were all here. All ready to serve again.

I smiled, there was nobody seeing me off this time and that was fine, it’d become an expectation with my family that I’d be travelling, after all my other six siblings were themselves off the island and now in the US and plus…I’d survived the war…and was home for the third time. Still, it was Monday and Pappa - Mass (pronounced ‘Marce’ for Master) Mac - was busy on his yam hill and Mamma P had gone to Port Antonio, since selling in the market was a six-day occupation. I was grateful to them. They’d given me the opportunity and even said I could go when the call was made.

Unfolding the Daily Gleaner rolled up under my arm, I reread the front page and its large black writing at the top of the white paper. The invite. Gripping my battered case, I watched as sailors, in their bell-bottomed whites and blues, rushed around the gangways, dodging through the crowd. High above us, by the ship’s railing, I watched an officer, dressed in a dark-blue or black uniform and holding a bullhorn to his lips. He was shouting:

Why Joining the Military May Not Be Worth It Anymore

Joining the military used to be a surefire way to get good retirement, great benefits, and an excellent standing in society. In fact, there was a point in American history where joining the military was considered to be both a duty and almost a rite of passage.

Morgan B
2 years ago

Military relationships are probably the most stressful, yet amazing things anyone can ever experience. Before my husband and I started dating, I was just a regular college student living life to its fullest. I had a relationship that I thought was going to be the one, but we ended up breaking up. That's when my husband came in the picture. My husband was away, stationed at another state then. He kept asking me out and I kept turning him down. The more I thought about it, the more I was leaning to give him a chance. The first thing that comes in girls' minds when it comes to military relationships is the distance, the trust, the honesty, etc. When I decided to give him a chance, that's when everything changed. I went from a relationship to where I saw the person every day to a relationship where I saw the person once every three to six months. Let me tell you, it was the right decision.