by John Aaron 20 days ago in veteran
Report Story 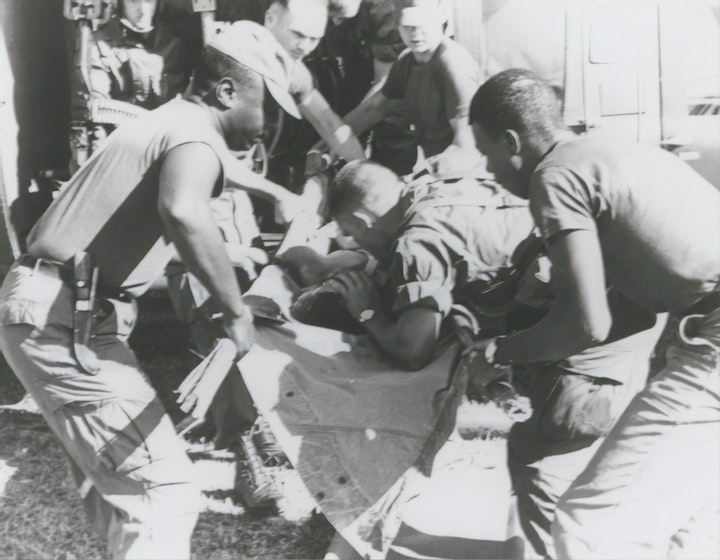 Originally posted to my blog Both Sides of the Bed on 17 February 2022, with minor edits

One of the most difficult aspects of parenthood is born from the knowledge we gain while experiencing the ups and downs of our own lives. By virtue of the mistakes we make, our brushes with death, our time spent in war zones... we know just how quickly this world can damage our children, and it is a terrifying revelation. Those of us with anxiety issues could probably speak volumes on the subject and relay countless anecdotes on the waking nightmare machinations of anxious minds, and the myriad ways in which they've already "seen" the world hurt their kids. Thankfully, I do not experience crippling anxiety in that way, but I do still see the world and what it is capable of, and it is enough to unsettle me. We are a species that will go out of its way to tear ourselves, and each other, apart.

Politicians and hawks have a way of viewing armed conflict in a very analytical and emotionless way, one that tells its story in quantifiable data sets: in terms of billions of dollars spent, billions or trillions of dollars borrowed, contracts awarded, stock price fluctuations, economic impact, approval ratings, odds of reelection, etc. Each war that is confined to a geographic area (like the wars in Iraq and Afghanistan), every one of which some might consider to be a single and uniquely encapsulated conflict in its own right, is further divided by these hawks into distinct phases, or separate and distinct wars of their own. Iraq, for instance, started as Bush's War before it became Obama's War, before it became Obama's War: Redux, before it became Trump's Occupation. More simply, it was Operation Iraqi Freedom (v. 1 - n) before it was Operation Something Something, before we went back for Operation Inherent Resolve (which may or may not be considered a second and distinct... or third or fourth... war in Iraq). Afghanistan began as the war against the Taliban and Al Qaeda (AKA Operation Enduring Freedom), became a state-building experiment handed down from administration to administration interspersed with a few other iterations, all of which then collectively became The Forever War, and then became Biden's Epic Blunder. Each administration was able to calculate its own data sets, its own metrics of success, and blame the shortcomings of its own War on its predecessor. So goes armed enforcement of foreign policy.

The truth of how many wars are truly fought in each geographic conflict may be far more complicated. Quantifiable data sets and sexy pivot tables do not matter to anyone other than politicians, analysts, and pundits. I could not fathom ever trying to explain to a seven-year-old girl, caught in the crossfire between US-trained Iraqi security forces and Al Qaeda, now dying in her apoplectic grandmother's arms in the middle of the street, that she should feel proud of the number of local security forces trained and armed in the past fiscal quarter, and of the number of unemployed Iraqis now no longer hooked on methamphetamines. Victory was not something she, nor her grandmother, could claim. Her war, in which she had been embroiled since she was too young to walk, was just about to end without any fanfare, without a pivot chart, and with very few witnesses. To the rest of the world she became nothing more than a data point.

The medic who stood out of the opened hatch of a Stryker armored vehicle just about 20 feet away from that girl and her grandmother, and only six or seven miles from the Coalition hospital, locked eyes with the little girl. He screamed to the Iraqis to get that girl evacuated to the hospital, ignorant of the sniper fire that had the rest of the crew ducking behind cover and under the protection of thick bullet-proof steel doors. He watched, through the smoke, as they finally understood what was being asked of them and called for a flatbed truck. They loaded her ashen body on board. He continued watching as they shrugged and exchanged quizzical expressions, visibly confused as to why anyone would MEDEVAC a corpse. That truck, to them, had better uses than as a hearse. The old woman watched as they loaded up her little girl, resigned to the understanding that she would never see her again, but still did not move as bullets struck the building near her. The medic did not understand why she did not move until years later.

He is still fighting his war today, 15+ years later. His battles continue now, daily, well into the early hours of the morning. For him, that battle never ends, even though the battlefield is now purely mental and in an air-conditioned home back in the states. It isn't Obama's War, it isn't Trumps Debacle, It isn't Biden's Operation, and it cannot be quantified, tallied, pivoted, or collated. It is His War.

That medic's family, isolated from him for years, fought their own wars while he was away. They fought against the fear of the unknown, the fear that grew in intensity with each passing day during which there was no word from him. Their battle raged constantly. It ran around the clock, and only ever offered them a reprieve when he was able to call home. Even then, fear was only calmed while he was on the phone... as soon as the connection terminated the possibility of sudden and unexpected death by ghostly artillery and phantom nightmares became a very real, and very terrifying combatant, worming its way deeper and deeper into already-fatigued minds. Every time a call terminated, his family's war picked right back up from where it had paused only moments earlier.

There is no such thing as a permanent cease-fire or detente in the wars fought by the warfighters or their families. As the saying goes: only the dead have seen the end of war.

My war entered a new phase once I became a father. I suddenly found myself reliving every firefight not only through the eyes of a soldier, but now as both a parent and as someone's child. Every person who died, it doesn't matter on which side, left in his or her wake a trail of devastation. Here in the states, the families of my fallen brothers and sisters have to pick up arms once again and fight their own forever wars every Christmas, every birthday, every memorial day; on the anniversaries of the deaths of their husbands, brothers, fathers, and sons... their wives, sisters, mothers, and daughters, and these wars will never end, not while there are survivors left to fight. It was the prospect of losing a son or a daughter that triggered the next phase in my own war. Parenthood brought me the most difficult battles and a brand new enemy.

What keeps me awake at night now are the new ghosts, the ones brought on by rewritten memories. That ashen little girl, she isn't fading out in the arms of her grandmother. Now, when I remember her well into the early hours of the morning, I feel more than the desperation of a medic shouting orders in a foreign language; I feel the devastation and the absolute helplessness felt by her grandmother. When I remember that day, still so clear in my mind, I remember the little girl as my daughter, and I remember myself as the one who is holding her as she bleeds out onto the street. I remember the helpless desperation and the fear and the shock of seeing something so frail and innocent getting taken so unexpectedly, so agnostically and coldly... and I see it all happen as her father, and my heart breaks. Again and again it shatters.

The hawks turn the page on their wars and file away their data sets - some of which they convey into campaign slogans as personal victories, the rest of which they'd rather we all forget - and move on to the next big-ticket item on their agendas.

The rest of us? We stay mired in what must approach an infinite number of individual wars that we have to fight every single day until the day we die. Only then will we see the end of war.

More stories from John Aaron and writers in Serve and other communities.