by Takeia R. Johnson 9 months ago in fact or fiction

A fictional story about surviving trauma 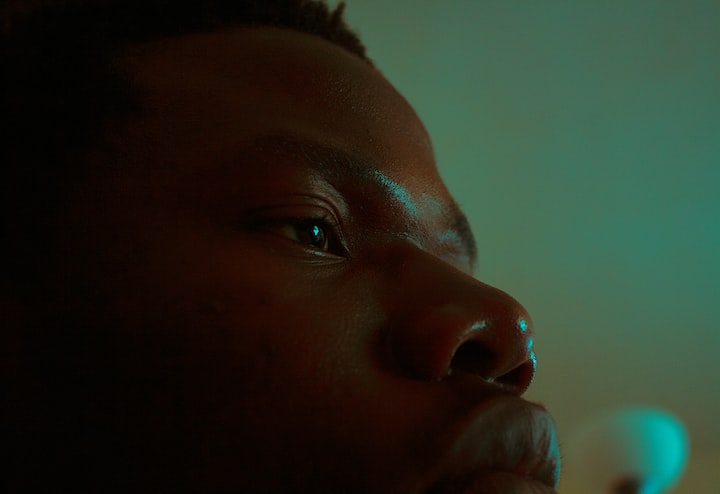 Photo by Olu Famule on Unsplash

James Levy sat at the folding card table that he used to eat his meals, read, and write. A stack of seven legal pads with clean, crisp white pages sat in the top left corner of the table, nestled against the wall. James used the pads for everything: journaling, therapy notes, gratitude lists, and incomplete stories. Seven ball point pens with black ink waited their turn in a dingy coffee mug next to the legal pads. The banker's box under the table housed hundreds of pages of James’ writing, organized by subject and date. A pocket-sized black Moleskin notebook was open to a handwritten page titled “Week of 12/11/16.” Today was Sunday. His sole obligation was to get groceries.

James kept to his daily routine that Sunday morning: wake up, brew coffee and put two eggs on to boil, drink water, take shower, brush teeth and hair, put on sweats, make one cup of coffee and two slices of toast, peel and eat eggs, wash hands, wipe crumbs off face, check the day’s agenda again, grab beanie, bubble jacket, and keys, go about day. James checked his mail. A card-sized envelope lay between the gas and light bills. There was a name that James had longed to see for five years. Now that it was before him, James feared what the envelope held. He stuffed the mail into his inner jacket pocket.

The Chicago winter breeze cut at James’ throat as he stepped from the entrance of his 2-flat apartment building onto East 76th Street. He walked four blocks west to Stony Island. He didn’t want to, but James flashbacked to that day in Dededo, Guam.

The USS Carl Vinson docked in Guam on January 13, 2008. It was 17 days after it the ship was originally scheduled to dock. The anxieties of the younger Seamen on their first deployment were palpable. Their anxiety rose exponentially each day their ship was extended at sea. Fraught with longing to stand on actual land and sexual tension that only local women could relieve, hostility and discomfort intensified. Petty Officer Third Class Michael Evans hurled insults and epithets at James and his best friend, Seaman Aaron Brown. If James found himself walking down a narrow galley and Evans was walking towards him, Evans shoved or shouldered him. Evans sneered at him in the mess hall and forced him off the benches in the gym.

“How can you read that? Wasn’t James Baldwin gay?”

Another time, Evans saw James writing on a white legal pad and accused him of writing a love letter to his boyfriend back home.

James was used to this sort of bullying. He was slender with a light skin complexion. He had been called a “pretty boy” all his life, both as a compliment from the girls who had crushes on him, and from the guys who envied the attention James received for his apparent mixed ancestry. James had always been introverted and mercilessly private. He preferred having only a few close friends. He figured that because he was quiet and no one knew much about him, they made up facts to fill in the blanks. They whispered about him or hurled what they deemed insults at him. James, however, was impervious to the noise around him. It was James’ ability to remain unaffected that incensed Evans.

When the ship finally docked at port in Guam, James looked for a bookstore with his best and only friend on the ship, Aaron. They were looking for more Baldwin; neither had read Another Country. After spending over two hours at Bestseller bookstore, James and Aaron walked into the sticky night air towards the restaurants they passed on the way to the bookstore.

Aaron and James grew up together in Hyde Park, Chicago. They went to the University of Chicago Lab Schools since sixth grade, when James’ family was finally awarded enough financial aid to afford to send him there. James knew he was one of about 10% of students who received financial aid. Aaron was from one of Chicago’s most influential Black families. He grew up in a Hyde Park mansion and he never made James feel excluded or less-than because James could not afford some of the experiences Aaron was privileged to have. They graduated from high school together and enlisted together. Aaron joined because he wanted to be included in his family’s illustrious history of naval service. James joined because it was the only way he could afford college, because his father had a distinguished career in the Army and wanted him to join up, and because his best friend was going to the Navy.

The stuffy heat caught in James’ throat as he walked through the automatic doors into Jewel grocery store. The contrast in temperature from the biting winter wind brought James back to the present moment. He grabbed a handheld basket and pulled out his pocket notebook to consult his grocery list. Standing in the vestibule, James’ memory abruptly took him back to that night when he and Aaron ran into Evans.

Raucous laughter pierced the night’s quietude. Evans and two other Seaman approached James and Aaron. There were two petite Guamanian women with them. Evans’ arm draped around the shoulders of one woman in an eggplant or indigo-colored strapless dress. She awkwardly adjusted her silken onyx hair that was strangled beneath the weight of Evans’s bulky arm.

Aaron always took the bait. He did not know how to ignore Evans.

Evans spat at James: "You gon’ take that? Your man talkin’ about he wants to fuck me?"

James scoffed at the immaturity and tried to continue walking but Evans blocked his path.

"We’re going with these ladies to their hotel. Y’all are coming too.”

When James again tried to separate himself from the group, Evans’ removed his arm from the Guamanian woman’s shoulders and shoved James with so much force that James fell to the ground.

Aaron helped James up and, looking at him with desperation, quietly pleaded, "Let’s just go with them. We can have a drink and then head out."

James tried again to regain control of his thoughts and continue grocery shopping. He concentrated on the array of apple varieties before him. He avoided the bitterness of Granny Smiths and the unreliable crunchiness of Gala apples. He found a Honeycrisp that had no blemishes and was too shiny, and carefully placed it in the basket he held in his left hand. He struggled to find five more apples like the first and knew that, in this southside grocery store, he would have to settle for produce that was only good enough.

After collecting the other produce items on his list – bananas, mandarins, and sweet potatoes – James continued to the meat section. As he stood contemplating the price of ground chuck, James felt a young boy crowd next to him and watched him reach for a roll of ground beef.

The younger boy grabbed the correct package of meat, turned, and handed it to the older boy, whose face was painted in hickory. The younger boy’s tawny face and bright eyes reminded James of the thick syrup he soaked his Sunday morning pancakes in every week when he was on the ship.

With his arm around the tawny boy’s shoulders, the older hickory-colored boy guided his little brother away from the chilly refrigerated section and towards the inner aisles.

James’ breath quickened as Aaron’s face flashed before him. His body turned cold and sweat began to gather in his armpits. James dropped the basket and was startled by the clang of it hitting the floor. He watched the shiny Honeycrisp slowly roll away.

James abandoned his groceries and walked briskly toward the exit. When he made it to open air, James inhaled deeply and exhaled slowly trying to slow his heartbeat. He continued walking until he arrived at his front door, retrieved his key, and let himself into the dark living room burning with radiant heat. James sank into the couch and remained there until after the sun set. He had fallen into a fitful sleep.

When he awoke three hours later, he realized he still had on his coat. As James removed it, an envelope fell from the inside pocket. He sat at the card table and read the sender’s name: “Aaron Brown.”

James read aloud: “I’m sorry I wasn’t there for you. –Aaron”

The check triggered the memory that James had been trying, unsuccessfully, to suppress all day.

Aaron, James, Evans, his two friends, and the two women entered Room 6-A at the Harman Loop Hotel. Evans pulled a bottle of Jack Daniel’s from his coat pocket and took a large swig. He drank it like it was apple juice. Evans and his friends took turns drinking from the bottle and then handed it to Aaron who also took a big drink and tried to hand it off to James.

Incensed, Evans got in James’ face. Evans was so close that James felt nauseous from inhaling the stench of whiskey and whatever garlic-infused meal Evans had eaten earlier.

Evans kicked the women out. Still in James’ face, Evans looks at his friends and said, "Why pay for a prostitute when we got a bitch right here that we can fuck for free?"

Evans punched James in the gut and when James doubled over in agony from the blow, Evans kneed him in the face. The other guys attacked Aaron, forcing him into a corner while raining blows on Aaron’s face and body. James was barely conscious after sustaining Evans’ punches and kicks. By the time Evans pulled him up by his collar, James had lost count of how many times Evans hit him. With an aggression that James had never before experienced, Evans grabbed his shoulders, forcing James to turn around so that his back was to Evans. Evans seized the back of James’ neck and pushed him down so that he leaned over the bed.

James lost his best friend that night in Guam. Aaron avoided James for the rest of their tour. When James managed to get close enough to talk privately with Aaron, Aaron rushed off, claiming some excuse as to why he didn’t have time for his lifelong friend. James was left alone when he needed a trusted friend the most.

As he stared at the cashier’s check, James battled competing feelings. Aaron had never thrown money at him like that before. It felt belittling. James ultimately decided, however, that Aaron would not send him this money to insult him. It had to have come from a place of seeking forgiveness and healing. James felt hopeful because he desperately needed a friend and that note could represent the beginning of their new friendship. The money would allow him to fulfill a longing that James had confided in Aaron while they were in high school. James would move to the Amalfi Coast in Italy. Staring at the check, James started to imagine living again.

I write at the intersection of the self and the social. I'm especially interested in:

- diversity and inclusion in the workplace

- myself (my identity and experiences)