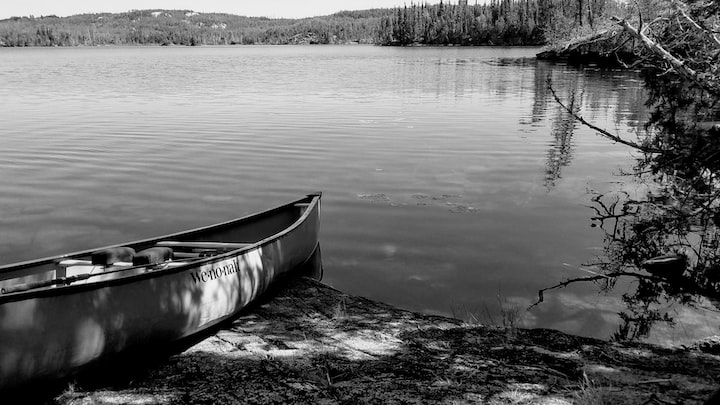 Photo by Gary Cartagena on Unsplash

“Grandpa, tell us another story!” the children shouted. He’d finished opening their cards and now everyone had a birthday cupcake on a paper plate with colorful balloons. “Tell us the one about your leg!”

Bob McNamara limped back to the living room while his son, Craig, carried his cupcake with a single candle alight.

“Ah, yes, everyone likes an adventure,” he said as he sat with his right leg stretched out. “Bill Enger and I were buddies from the war, being in the same company and calling Minnesota home. After all that, we liked to take canoe trips every summer. This was years ago, you understand, when the Boundary Waters was newly protected. There we were, in the far corner of God’s most serene wilderness, not a boat or motor for miles. We had to portage between lakes. You know, carry our gear over the land. I got to the end of the trail and set down our packs…”

I got to the end of the trail and set down our packs. Bill was coming behind me with the canoe, a hulking aluminum watercraft we could have used during Operation Pegasus to shield soldiers from the shelling. We sat on boulders at the rocky shore and looked out at the calm lake. The vast wilderness is a splendor. It reminds me that despite the ugly ways of man, there is plenty of beauty to behold.

I dug in my pack for jerky and trail mix and Bill heard something. He used to be a scout but war does funny things to your ears. You get used to being on high alert in the jungle and pick up anything that sounds out of place, like an audio tripwire. Until all the mines and shells steal your senses blast by blast.

So we sat, listening.

Sure enough, there was a faint hum. Bill gauged it to be an aircraft maybe five miles northwest and moving away. A strange sound.

After my snack, I stepped off the portage trail to take a leak. Behind a boulder from the glacier period was a thick stack of cash. Like a green brick, it was wrapped tightly and held by a band.

He appeared, face twisted with confusion.

He saw the brick.

“I’ll be a sonofabitch. Money just falls out of the sky after all.”

We picked turned it over. Tucked into the band was a black leather book containing scraps of a map and a plane ticket from Chicago to Seattle.

Bill compared it to our map of the Boundary Waters.

“And we’re here,” I said, pointing to a huge lake with a series of islands. I did a double-take at the first island on the lake. “Bill, you seeing what I’m seeing?”

He took the weather radio out of his pack and wound the crank. That charged the battery which allowed us to pick up basic reports in the remote area. It only caught static at first.

The message looped again. Bill put the radio in his vest.

Without a word, we switched into war mode and silently slipped into the canoe, leaving the packs on the shore.

The parachute was twisted in a pine tree and its tangled wires disappeared in the surrounding needles and foliage. We pulled closer, Bill gestured to circle the island.

That’s when the first bullets fired.

“It’s a canoe!” I yelled back. What were we supposed to do?

We kept our heads low and paddled furiously to the west side of the island. The water splashed but nothing came too close.

Tucked behind a rocky cliff and out of view of the parachute, the shooting stopped. The island was shaped like a lumpy potato and was very tall. We tied the canoe to a scraggly pine and clambered up the rock cliff. Bill gestured to the left and right and then his watch.

Split up, meet back in twenty minutes.

He went towards the parachute and I followed the shore the long way around.

The ground was dotted with pines that had managed to find purchase. Tangles of brush made it difficult to see. To my right, the middle of the island rose sharply to a flat slab, topped with a comically round boulder like a stony cherry on top of a granite sundae.

I skirted along the cliff shore. My heart thudded and it felt like I had cotton in my mouth. The only sound was a light splashing of the lake.

Back in ‘Nam, this was The Calm. It always came, eerie and heavy, just before the storm when someone snagged a tripwire or a sniper put a hole in your buddy’s throat.

My heart skipped. I nearly screamed.

I relaxed my grip on a pine branch and inched ahead. There was a ragged root system from a blown-down tree. I hunkered behind it and peered over the top.

Through the branches, I saw the parachute. Below, a figure wiggled upside-down against the harness. At the trunk of the tree was a blue duffel bag with bricks of green cash spilling out.

My internal clock told me it was time to get back.

Bill was there when I returned and he’d pulled our canoe up the cliff with a rope.

“Just the one guy, stuck in his harness,” he whispered. I nodded.

“Big bag of cash at the bottom of the tree,” I added.

Again, Bill fished out his weather radio. He passed it to me.

“Set the emergency signal. I’ve got a plan.”

I cranked furiously and then toggled the switch to DISTRESS. I tucked it behind a tree while Bill filled his bucket hat with rocks the size of golf balls.

I recalled the tactic our company had used on the tiny village.

“I’m the billy and you’re the flock?”

We shook hands and looked each other in the eye like back in the jungle. He grabbed his hat of rocks and crept to the rise at the island’s center. I turned to the canoe.

“All threats, foreign and domestic,” I whispered. I flipped the canoe on my shoulders and inched around the shoreline. Minutes later, I tucked behind a pine grove and a square boulder like an enormous box. I peeked past a tree trunk. The hijacker was in view, still wrestling upside down with the harness.

I whistled so Bill knew I was in position.

A moment passed and I wondered if he’d heard me.

Then the woods erupted like a hailstorm. Rocks rained down around the jumper. One skipped off the top of the box boulder and skittered past my feet. Bill has a hell of an arm.

The move worked exactly; the jumper tugged furiously at the clasps and straps. He yelled and the gun came out again. Shots fired off into the woods.

The jumper was disoriented and defensive.

This was my moment.

I wiped clammy hands on my vest and hoisted the canoe. I sidestepped the box boulder. The duffel of cash was visible beneath my aluminum helmet. I used it to guide my line.

The hefty canoe provided cover against the bullet fire. My head rang from the reverberations of bullets deflecting off it, like being inside a church bell.

How many shots were left?

I raced and tilted the canoe forward. My momentum carried it straight up and down which sent the back end hurtling into the entangled hijacker.

There was a thud and agonizing groan.

The sound of a broken body was something I could never forget.

Just like the misdirection and battering ram we had deployed at Da Hoa Binh.

I risked a glance, the canoe stood upright against the tree and jumper. The young man’s eyes were closed and blood oozed from a gash near his temple. I noticed his fingers held a pistol. Then they went slack.

The gun tumbled toward the ground. In that second, I imagined diving for cover, having a cold beer with Bill, giving a ring to my gal, wondering what joyful adventures might follow, seeing my body laid up in a hospital while machines beeped and stopped, my headstone.

Anything can happen in war. I’ve seen guys blown to pieces because they stepped off the trail in the jungle, guys cut down while filling their canteen in a stream, guys whose grenades blow before leaving their hands. Nothing is fair.

When the gun slipped from the hijacker’s hand, I saw the stupid way my life could end.

The gun hit the ground and the final bullet discharged.

I crumpled to the ground.

“Bobby!” Bill shouted as he raced down from his position on the rise.

I pushed my hands against the wound but they were slick and hot with my blood. Bill loosened his buckle and fished off his belt. He pulled it tight around my thigh, up high near my groin. Then he dug in his vest and pulled out a kerchief. In a flash, he tied it around the wound.

He sat back on his haunches. His hands were deep rusty, smeared with my blood. “It’s a clean through-and-through, Bob. Some blood loss but it just needs to be cleaned and sewn up. Damn lucky.”

Then he propped me against the box boulder while float planes landed on the lake and surrounded the island. Bill went to the shore with his hands up and explained what happened. I felt tired and thirsty.

Bill came back with a canteen and a U.S. Marshall. I sipped and they explained everything with the hijacker taking hostages in Chicago. Once he had the ransom cash he made the crew take off, hoping to parachute over the border and disappear. I don’t remember all the details, the adrenaline made it hard to focus.

“Thank you, soldiers, for your service today,” said the Marshall. “This bastard is going away for a long, long time. Say, we were going to post a reward for his arrest. You each deserve a block of the cash for your heroic acts.”

Bill waved his hands. “No, no, sir. We always swore to do the right thing, whether in uniform or not. I’m sorry.”

“I’d expect nothing less. Under the authority of the U.S. government, I’d like to thank you each with twenty thousand dollars. Don’t worry, we’ll sort out the lost funds with folks in Chicago.” He passed us the blocks of cash.

Bill and I have always been good at accepting orders.

“And how did you get home, Grandpa?” asked little Janie.

“Well, they cut the jumper out of his harness, cuffed him, and threw him in a plane,” said Grandpa Bob. “Then they helped us get our packs from the portage and told us they’d return the canoe. After the excitement, they flew us to the VA hospital in Duluth and paid for my leg to get fixed up. I went home on my birthday all those years ago.”

With shiny eyes, he added, “Of course, Bill and I also had the block of cash we’d already found at the portage. So we ended up using the money to start our dream business, an outdoor guide and gear outfitter in the Boundary Waters.”

“And retirement has been splendid!” exclaimed Bill from the kitchen counter. He raised the last of his cupcake to toast his friend.

More stories from Horace Wheatley and writers in Serve and other communities.