by Mickey Markoff 2 months ago in airforce
Report Story

Hyundai Air and Sea Show Executive Producer Mickey Markoff talks about the inspiration behind the first Air and Sea Show, and the importance of continuing with the original mission and vision years later. 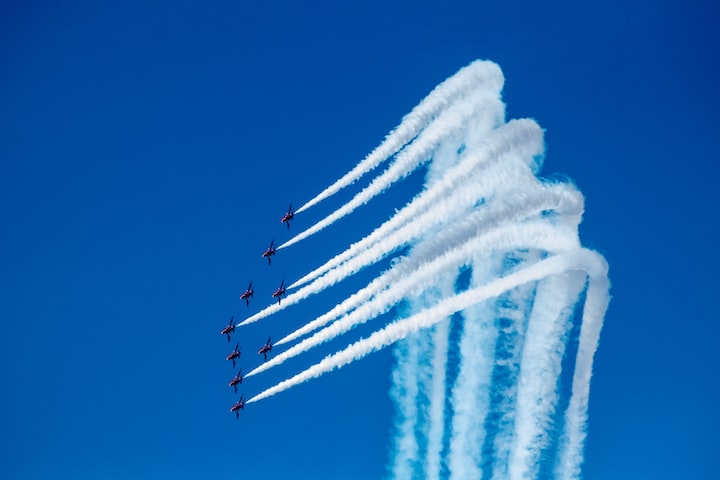 Photo by Dan Turner on Unsplash

This article was previously published by Mickey Markoff on Newsbreak.

If you have lived in South Florida over the last few decades, chances are good that you have either heard of or attended on the infamous Air and Sea Shows on our State’s beaches. The locations may have varied slightly throughout the years, but the mission and vision has remained consistent. Founder and Executive Producer of the Air and Sea Show, Mickey Markoff, has been passionate about the importance of paying tribute to our nation’s heroes since the event’s inception, and carries this through in each one of his annual events.

While the Air and Sea Show has become a local staple in the skies of South Florida, its origin story hails from chillier climates in Chicago. Mickey Markoff, also President of multidimensional marketing firm MDM Group, saw an opportunity to revitalize what was then the Lakeshore Park Air and Water Show. The event was originally run on a limited budget of only $88 (around $850 today). With limited finances to organize the show, the publicly-funded event ran into roadblocks.

Mickey Markoff leveraged his marketing expertise and helped introduce the concept of corporate sponsorship into the mix in 1989.

Fast forward to today, and the Air and Sea Show is a fixture on land, air, and sea in South Florida, incorporating corporate sponsorship and remaining steadfast in its mission and vision to pay tribute to our nation’s heroes.

The date of the event falls on Memorial Day Weekend each year to help raise public awareness of the importance of the role of our nation’s military and to pay homage to their sacrifice. The 2021 show incorporated a TV special Executive Produced by Mickey Markoff and Peter Berg, and also narrated by the latter fixture in Hollywood, ‘Gold Star Tribute’.

In the words of Air and Sea Show Executive Producer Mickey Markoff, “There is no better time than Memorial Day to pay tribute to those that paid the ultimate sacrifice on behalf of our freedom”.

While Memorial Day may make many think of mattress sales, Markoff is determined to remind the public of those who have sacrificed their freedoms so that we may enjoy ours.

This was the original inspiration behind the event; however, it also sought to increase civilian awareness on the armed forces, serving as an opportunity to increase recruitment. Today, the event has a presence from all branches of the United States Armed Forces, as well as some international branches. Britain’s Red Devils have been known to put on demonstrations alongside the United States Air Force and the Blue Angels. The British Army Red Devils Parachute Regiment is again scheduled to do a demonstration in the upcoming 2022 Hyundai Air and Sea Show.

There will be a diverse group of demonstrations and exhibits at the 2022 Hyundai Air and Sea Show on Memorial Day Weekend, with fly-bys from multiple USAF aircraft and precision exercises from US Army Special Ops, the United States Coast Guard, and more.

The Music Explosion will make a reappearance this year after a cancellation of the 2021 show amidst pandemic concerns.

Despite setbacks during the coronavirus in 2020 and 2021, the event has remained after some pivoting to accommodate restrictions. The cancellation of the 2020 show found our nation’s heroes honored in a different way, with hometown heroes and frontline worked recognized with a community award via the Salute 365 Initiative, and fly-overs from the Blue Angels as part of operation ‘America Strong’. The 2021 Hyundai Air and Sea Show went off without a hitch, honoring fallen heroes once again in Miami.

With the ease of restrictions of public events, the Hyundai Air and Sea Show is set to be back to Miami Beach with an exciting schedule on offer. Tickets go on sale this Friday, March 18, 2022 for the upcoming event, May 28-29, 2022. Keep an eye on the skies this upcoming Memorial Day for the Greatest Show Above the Earth!

Mickey Markoff is best known as an airshow producer of the Air and Sea shows in S. Florida. He is also President of MDM Group, an innovative marketing firm. Markoff is EIC of the publication "Warrior Stories".

More stories from Mickey Markoff and writers in Serve and other communities.