by Iggy Paulsen about a year ago in history

From cakes made out of crackers to aspics, the things people ate during World War II will make you realize how far our nation went to ensure victory at the front lines.

After Pearl Harbor was bombed, American soldiers found themselves fighting one of the bloodiest wars in human history. Their harrowing stories are the subject of hundreds of military history books every veteran should read, and more than a few fair shares of World War II memoirs.

What most people forget as they read all the stories of bloodshed on the battlefield is that families back home struggled, too. Families throughout the world had to tighten their belts and make do with limited rations. The majority of food was reserved for troops.

As a result of the austerity measures and food rationing, there were a lot of really strange things people ate during World War II. Most of these foods would appear to be pretty horrible by today's standards, but some might intrigue you.

If you're like me, you might be a little bit curious about what the generation that grew up with freedom gardens had to eat. Thankfully, there are historic records that show what foods were common during the era where food shortages were all too common.

These dishes below were popular during World War II, and at times, were even suggested by military experts who wanted to encourage people to eat well during periods of rationing. Give them a try, and taste the all-American military history! 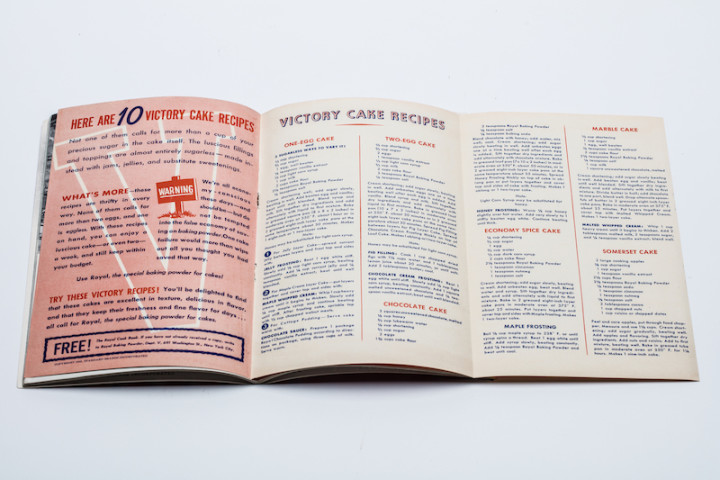 Don't ask me why, but most of the things that people ate during World War II were in "loaf" form. In most cases, foods were ground up and chopped into little pieces, then glued together for a sliceable, easy-to-store meal.

Getting enough protein for a standard meatloaf was very hard for most people. Cooks were crafty, though, and they came up with meatless meatloaf recipes that were edible...for the most part.

Economy loaf was an example, and it was first featured in the Modern Hostess Cookbook. Since vitaminized margarine is no longer existent, you can probably substitute it for regular margarine if you want to create this patriotic mouthful.

Woolton pie was one of those few tasty things people ate during World War II that somehow never stuck around after the war. This was actually first developed in Britain, and soon found its way over to the United States due to its popularity.

This pie was a great way to cook a massive, nutritious vegetarian meal for a large family. Lord Woolton, who helped develop the pie as a part of the rationing book, made a point of appearing publicly to enjoy the dish named after him.

Honestly, it's not that bad. When making the pie, make sure not to skin the potatoes, "as the very sight of peelings, deeply hurts Lord Woolton's feelings!" WWII was a very different time then today. In our modern age, having quality maple syrup is a rarity. We actually pay a premium price for good syrup. Back in the day, it was far more plentiful than regular sugar.

When families were able to scrape together enough food to afford a sweet treat, maple syrup was the sugary goodness they relied on. One of the most popular sweet World War II recipes available for consumption was baked custard.

Most people still enjoy a nice cup of the stuff today. Who said rationing had to be a bad thing? 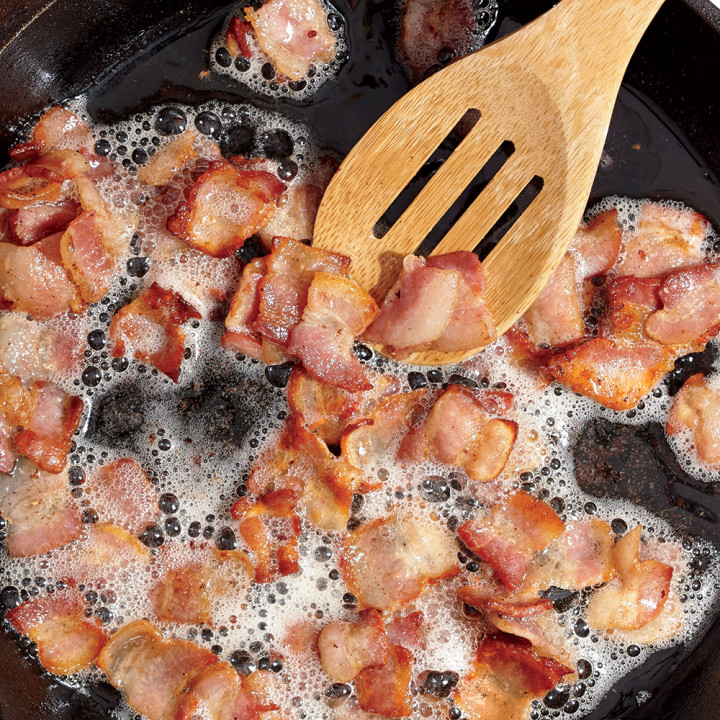 In the United States, a large portion of an American diet involved meats. Meat wasn't just a source of protein; it was the source of flavor that topped other staples like bread, potatoes, and dumplings.

Most food needs a little bit of fat to taste good. With meat shortages being very common, the ability to make gravy or even get some savory taste out of food became difficult.

Wartime drippings were literally bacon fat collected as people fried up whatever strips of bacon they could get their hands on. When meat ran out, they would use drippings to grease pans and even season food. 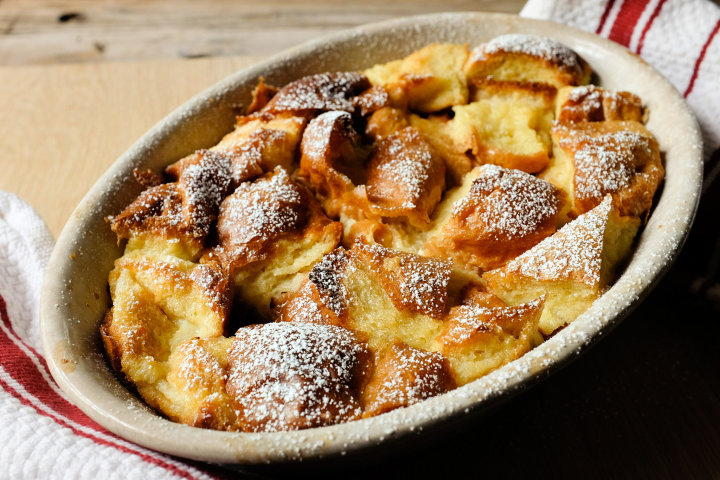 Prior to World War II, most puddings were made with fruits like figs, plums, apples, and peaches. With the disappearance of fresh fruits from stalls, people started to make puddings out of what they had left.

That's exactly how bread pudding actually started off. Unfortunately for the families on the home front, it's not the tasty thing we know today. It actually used to be made with stale bread and suet.

Despite the (kinda) gross beginnings, people still eat this today, and the recipe has evolved to be a delicious comfort food in both the United States and England. 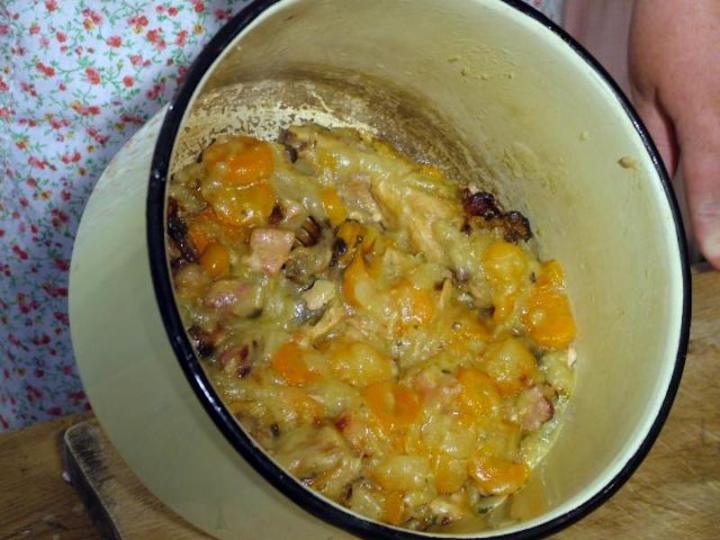 Though food rations were pretty hard to handle at times, there was a silver lining to World War II's lifestyle. Most people grew their own fruits and vegetables at home in little "freedom gardens," which alleviated the strain caused by alack of fresh food at grocery stores.

The casseroles that came out at this time were actually fairly satisfying. This thick recipe for vegetable and oatmeal casserole found a home in many peoples' bowls during the war—and after! 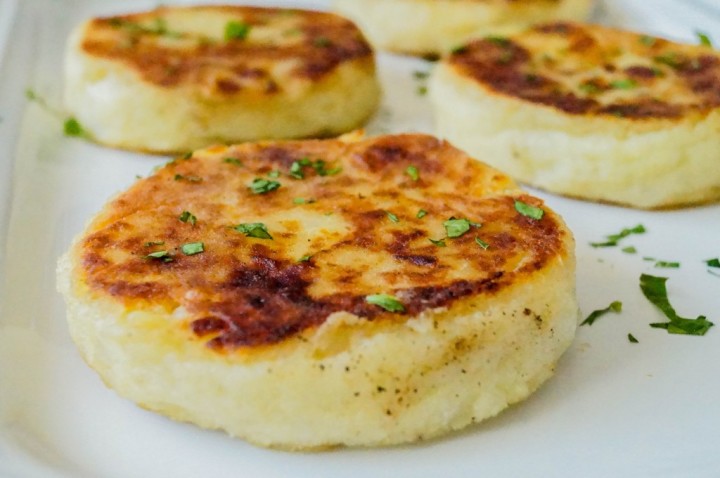 Potatoes found their way into the homes of just about every Allied family, even if they weren't too happy about eating them. They were plentiful, affordable, and made for a wonderful filler.

Potato cakes were a common offering on platters across the country, and they were done up in a number of different ways. Some preferred latkes, others preferred using the potato as a savory cake. 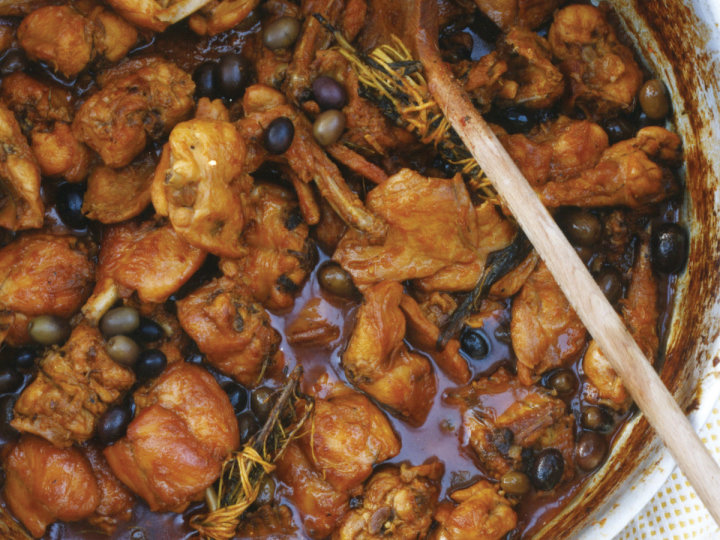 Both British and American families on the homefront would do whatever they could to stretch their dollar as much as they had to. It was a time when hunting and fishing often made the difference between a balanced diet and a starvation diet.

Families who would go out hunting would typically catch small game like rabbits. Though this recipe doesn't shine a light on the beef/mutton stew from authentic Civil War recipes, one of the most common things people ate during World War II was rabbit stew—especially in rural areas where the hunting was good. 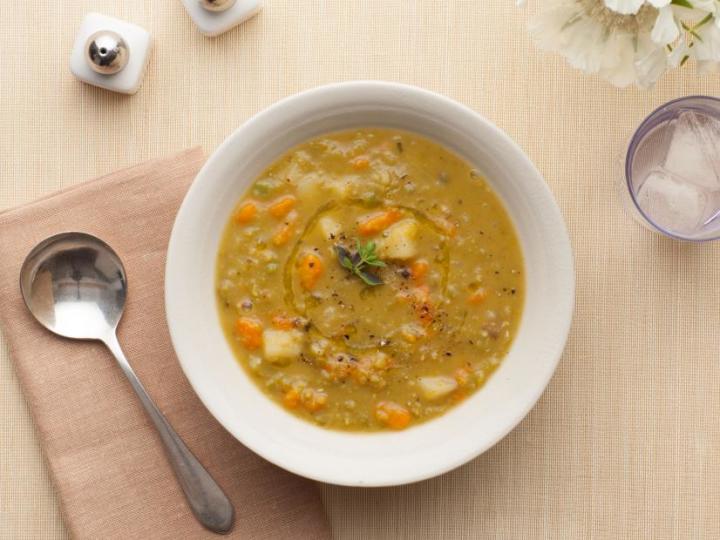 Peas were surprisingly cheap and plentiful at this time, in both canned and dried form. For many families, that meant that they would end up eating a lot of split pea soup.

It was cheap. It allowed people to add flavor using ham bones, and it filled you up. It was as war-friendly as you could get.

"Now Jackson had his acornsAnd Grant his precious rye;Teddy had his poisoned beef —Worse you couldn’t buy.The doughboy had his hardtackWithout the navy’s jam,But armies on their stomachs move —And this one moves on Spam."—WW2 Poem

With all the rationing that people did in order to save food for the troops, it's kind of shocking to hear how many everyday foods that were first developed just for the military as a way to keep them fed. This led to one of the most unpopular things people ate during World War II: Spam.

Spam, which was a portmanteau of "spiced ham," was developed to feed the troops. The soldiers, for the most part, hated it. After the war ended, Spam became known as the "poor man's meat."