The Pairing You Didn't Know You Loved

by Alfie Jane about a month ago in humanity

Drinkers and non-drinkers alike can enjoy these pairings 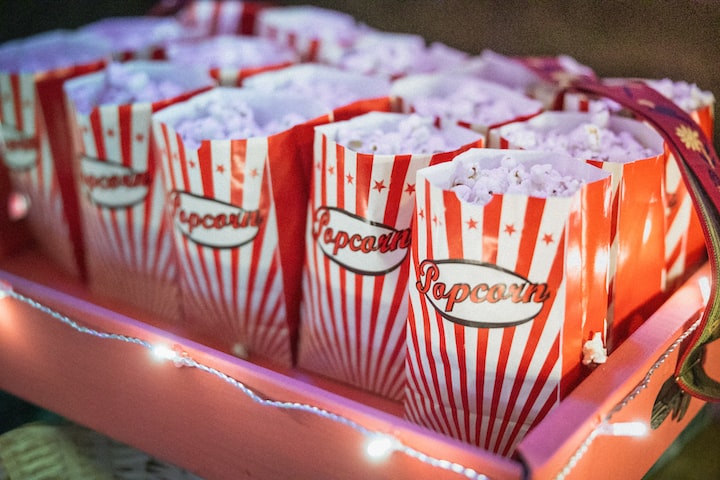 Photo by Corina Rainer on Unsplash

Mine was a Disney movie. I don't remember if it was Beauty and the Beast or Aladdin. The result was still the same. I got so scared, I cried through the end of the movie, even through the happy ending.

Being scared didn't keep me away from Disney movies, though! I grew up watching Disney movies and ended up working for The Walt Disney Company for six years as an adult! I watched more Disney movies than most of my coworkers!

So how did I go from frightened child to low-key Disney nerd? Maybe my parents comforted me after seeing me so scared after the first movie. Or perhaps the first memory of popcorn made me forget I got scared in the first place?

Nobody can answer that question now. Too much time has passed since that day. I like to think popcorn was the comfort and the start of a beautiful friendship between the movies and me.

However, I want to take this relationship to the next level. I want to add a unicorn to our relationship. What better way to do that than to get a drink?

The first step to pairing your popcorn is to make sure your drink has carbonation. Carbonation makes every drink better! It enhances the saltiness of popcorn while making it easier to wash it down.

But one question helps figure out which one you're going to choose. And it'll be the only time I ever ask this question: Are you a drinker?

Growing up in a bar, you learn quickly and never ask someone why they don't drink when they tell you. We don't know how well someone will take it if you start asking them those questions. We don't learn about their struggles unless they want us to.

I rarely ask if someone drinks unless I know it has to do with planning a night out with them. With movies, you don't need alcohol to have a fun movie night.

For those people, I highly recommend Diet pop when they have some popcorn! Why Diet? The regular pops have so much sugar in them that you wouldn't be able to taste the popcorn when you drink them. The kernels would dissolve in your mouth, and you wouldn't know you were enjoying a bowl of popcorn.

Diet pop is nowhere near as sweet as a regular pop. So when you eat some popcorn and wash it down, the diet pop improves the popcorn. I'm not sure what it is about diet pop, but it enhances your popcorn flavor. And it's a wonderful feeling.

As for the drinkers, you're not going to be left out. There are multiple drinks with carbonation in them for you to enjoy! My personal favorite is a bottle of Mike's Hard Lemonade or a bottle of sweet, bubbly wine.

Yes, there is sugar in Mike's, sweet wines, and bubbly wines. But nowhere near as much sugar as a regular can of Coke. Mike's has a lot of sugar, but it still doesn't have as much as Coke.

Even with the sugar content in a glass of sweet wine, it doesn't overpower the flavor. The carbonation in a bubbly wine enhances the flavors, the same way a Diet pop does. I don't understand why carbonation works so well with popcorn, but I enjoy it.

I'm not sure about the science behind carbonation and popcorn. But something about it makes things so much better. It could be something as simple as the carbonation keeping things from getting stuck in your throat!

No matter the reason, popcorn, and carbonation are the pairing of any movie-goer's dreams! The best part about this pairing is that you don't realize how much you like it until someone points it out to you. Then you sit back, think about it and think, "Yeah, they're right. I do like my popcorn better with a carbonated drink!"

Next time you have a movie night, don't be afraid to take out that sweet, bubbly wine. It's not as weird as you think it is. We all love the carbonation. Popcorn loves it too.