By Any Other Name

by Kit Olsen 10 months ago in Identity
Report Story

I was twelve when I first started journaling. Within the first month of doing so, I was no longer signing off with my birth name. 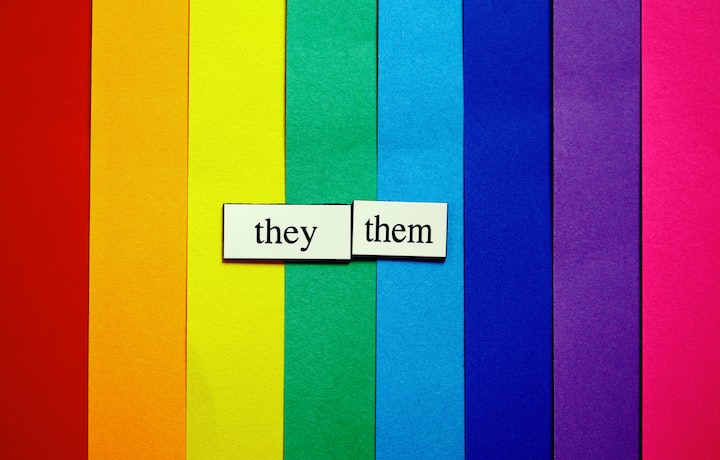 I still remember the first diary that I picked up in my adolescence. It was cheaply made, probably some sort of dollar store variety, big box store clearance item. The church I went to had a particularly capitalistic way of ensuring continued pleasant behavior from their children. Certain tasks and behaviors were rewarded with poker chip “coins” that could be exchanged for different rewards in the Sunday school “store.” When I saw that notebook, pink, holographic hard covered, and perfectly well bound, I knew it had to be mine. I saved up my raised hands, my stacked chairs, my Bible verses flawlessly memorized, until I was able to make the exchange I so desperately wanted to make.

The journal came home with me that Sunday and I immediately began to write in it, every night before I went to sleep. You’d think a twelve year old wouldn’t have too much to write about, but it didn’t matter. I talked about the day, about my schoolwork, about the few friends I had and the first little blossoming crushes on the pastor’s son.

I was not too far into the pages of that journal before I mused the following: “I don’t like my name. I don’t know why, it just doesn’t feel very original. It’s boring. Maybe I’ll change it in here to something I like better.”

I never signed off on my journal entries with my birth name again..

Some of the names were long and elegant and feminine, better befitting some Renaissance lady. Most of them were far shorter, masculine or androgynous in nature. The longest in the running was “Jo”. I had a strong love of the book Little Women as a child, and Josephine “Jo” March was an inspiration beyond words for me in my youth. Strong, independent, strong-willed. Wanted to be a writer, and wouldn’t take no for an answer. I started my own family periodical much like Jo’s “Pickwick Papers”, writing under half a dozen different pseudonyms. And as I wrote down any and every occurrence that took place throughout my daily life, I started signing off as “Jo.”

In time, I outgrew that one as well. It had nothing to do with a lack of love for the name, it simply no longer fit much like the clothes I rapidly outgrew, the fashions and styles that came and went as rapidly. And so, it was with a strange bit of resignation that I simply… ceased to journal. It seemed a more fitting end than trying to give up a name I had grown so accustomed to. One that I took such comfort in for so long. And so I returned to who I was once again. Who I had been, and who I so desperately wanted to lose.

As I got to college, and began to lose the pieces of myself that had so thoroughly comprised my childhood, as new and better metamorphoses grew and changed and evolved, I found that my name still fit poorly. Much like the now ill-fitting dresses that once clothed me in Sunday school and Sunday worship services, my name clung to me in all the wrong ways. It stagnated. It vanished into obscurity with another 14% of my graduating class (yes, 14%.) .

Then, over a particularly memorable winter break, I sat with my sister on the floor of our shared bedroom. I'd come home after a successful first term of school, and was happy to spend time with one of my best friends in the world. We never needed to do much together to keep ourselves entertained, our conversations were blessings in the highest degree, and our silences never lasted for long.

On this particular snowy night, our conversations and joking lasted long into the night as we watched a series of tipsy Super Mario Bros. playthroughs on YouTube. At that moment, one little line changed my life.

"Sing a song, Katherine," one of the players said.

The Katherine in question immediately launched into a tuneless, offkey singsong of "Sing a Song of Sixpence." Pausing dramatically after every line, she left the last line up for grabs for her partner to complete, which... he did. With a loud and boisterous series of "Sing a ling a ding a dings" in the appropriate rhythm, and the comment of "Honestly, you've improved it," from the Katherine.

Overtired, our giggles escalated and, trying so hard not to wake up the rest of the house, we paused the video and broke into stifled laughter. That laughter, however, lasted for weeks after, as, at all of the most inopportune moments, my sister would look at me with a mischievous glint in her eye and speak the four words that brought about what turned into a long-lasting nickname: "Sing a song, Katherine."

The name stuck. It spread across my immediate family and a few close friends. And as time went on, it evolved. I was "Kat" or "Cat" and my personal favorite, "Kit." And I embraced it.

It was not merely the name, however, that would change.

For many, it may prove surprising that it took until college to learn anything about what the word “transgender” meant. What “queer” meant. I knew “lesbian” as I was accused by those in my homeschooling group for those who saw me taking comfort in long hugs and physical closeness with my feminine friends, I knew “gay” as it was flung at me by the young people at my church for being awkward and not easily social. But as I found my footing now in my college, I found that the feelings I’d had for years and years had names. That all the tomboyish ways, the greater amounts of comfort in androgyny, the desires to be mistaken for a boy, had a name. The name, I found, was “nonbinary.”

And “Kit”, with all of its short, abrupt, concise, lack of gender, was perfect.

I understand that many within the LGBTQ+ community do not particularly like labels. Many find that it leads to misconstruction of who they are, and find them too limiting. For me, finding that label, finding that name, finding those like me, who found beauty in -1s and 0.5s and 2s? It was beyond a revelation to my poor, now lost and forsaken by those I’d grown up with, soul. It was revolutionary. It was a light in a fog of ignorance and intentional blinding that made me feel Something for the first time in years.

And so I came out.

It’s been nearly three years now since then. I knew for two years before that day, and it took every one of those seven hundred and thirty odd days to screw up my courage enough to tell the public sphere of my acquaintances who I was. It's taken the remaining thousand or so days to come out entirely publicly. Even now, it’s been a constant journey of hearing my old name everywhere I go. It appears on my mail, shows up on my paychecks. It hangs on my wall on a diploma I never use these days. It lingers on the tongues of my family and old “friends” who I thankfully rarely see.

Even still, the new name, now nearly eight years in the running since the conception of the nickname, holds me close and reminds me of who I am.

The journals I write are different now. They spill over pages and pages in a Google document, much like this entry I have elected to share. They dig deep into histories I sometimes wish I could forget. They push buttons I didn’t know I had, and tug on threads of knotted tapestries that will take years and hours of therapy to unravel. They question and question and are never satisfied with an easy answer.

I no longer sign off on these entries however. I don’t feel the need to. The name I have by birth, the name I’ve chosen, the name I may yet have, should evolution and metamorphosis take hold of my gender once again, are all within me now. They mold and shape. They call me home and live within me, past and present and future alike.

Hello friends! If you liked this little essay, feel free to check out some of my other work! I usually tend to stick primarily to fiction and poetry, with a little nerdy stuff thrown in there, but there may well be a few additional pieces more like this one further along the line. Thank you very much for sticking around and reading to the end! Much love and I hope to see you in other works!

More stories from Kit Olsen and writers in Pride and other communities.