5 Types of Stoners - the Documentary

by Varga Norbi 8 months ago in humor
Report Story

Still better than Shark Week or the Game of Thrones finale. 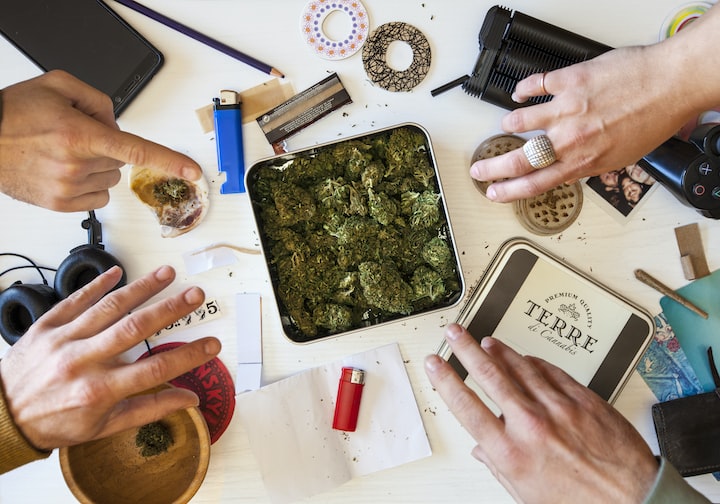 National Geographic loves shoving the same shark and cat documentaries down the audience’s throats, which is perfectly reasonable when considering that we haven’t gotten a new animal from God ever since the great flood.

Sadly, unless one day the stoner species will be put on the endangered list, we won’t be seeing many documentaries about these magnificent creatures, although the diversity Mother Nature gifted this species with is truly remarkable.

So, in an effort of conservation, we thought it would be useful to raise awareness about these unique, yet mysterious beings. Roll the intro!

Probably the most stereotypical type of stoner, even more so than that kid from high school with the “420" hats, who grew up listening to Snoop Dogg and Wizz Khalifa. The Free Spirit casually wears his most colorful t-shirts which resemble an LSD trip, paired with sandals and some comfortable shorts, despite the freezing temperatures. A key accessory all free spirits own is a kind of strange fragrance, with hints of unwashed hair and cannabis. This is likely a homemade recipe, as we couldn’t find any samples to buy online.

The free spirit is very peaceful, and musical. They will often time join equal rights protests only to find new people to smoke and spread kindness with. Occasionally, some specimens will also possess instrumental skills, most commonly for the guitar. Among their favorite artists we often times find Led Zeppelin, the Red Hot Chili Peppers or Aerosmith, but their kindness knows no boundaries, thus they will gladly listen and enjoy nearly all genres.

Characterized by peacefulness, kindness and freedom of thought, the free spirit is one of the most iconic types of stoners. Although their numbers have been declining since the 60s, legend has it that large group gatherings still take place occasionally in the worlds of Woodstock or Coachella, depending on the lineup.

This type of stoner possess a lot of knowledge when it comes to the subject of marijuana, perhaps too much…

The professor has a real devotion towards cannabis and cannabis culture, having studied the history, science, sociology and perhaps even the mathematics behind the plant. Problem is, the professor cannot resist the urge to tell everyone about his wisdom, especially when under the influence.

He will likely tell you which religions started when a prophet lit a well packed pipe, and how the cross joint was the inspiration for the crucifix, not vice-versa.

A real eccentric, the professor will first smell the weed to analyze it, although the results are always the same, “this is some good s#it”.

He claims that his first job was to test and deliver weed to the president, but he quit when the Trump administration came to power, so now he writes scientific articles about the effects of cannabis on the relationship between fish and people.

If you ask for some backup to his claims, he will gladly present you a long and detailed list of Wikipedia articles and YouTube videos, as well as some random Netflix series which happen to mention weed once or twice over their 6 seasons.

Professors are often times seen alongside their most compatible companions, from the Preacher species. Sequel?

A rare sight in the stoner community, the unknown champion hides his identity by taking the shape of the average Joe. There’s nothing unusual about this guy, he can be both quiet or talkative, can be a popular figure or the social reject, but there’s one thing which makes him stand out, his ability to smoke joint after joint after blunt after joint after bong hit after joint and one more blunt, and still act completely fine.

We have little information about their numbers, as these creatures can take the form of nearly anyone surrounding us. A cashier, a cop, a professor, Scooby-Doo or even the president can be an undercover super stoner, yet we might never get them to reveal their real identity.

As all of you gather around the TV, after just finishing the second or third joint of the night, you finally find a great show or video to watch, and then you hear it. A deep tremble, shaking the walls, a loud snore which can be heard from the Great Wall of China, as one of you fell asleep before the night even started.

According to Californian folklore, these creatures require around 10 to 12 hours of sleep a day, but due to the burdens of life, they barely get 6. Thus, as soon as the sleeping beauty hits the blunt a bit too much, their entire body shuts down, plunging them into a deep slumber.

This breed of stoners can be the first person to fall asleep, yet also the last to wake up the next day. Their sleep is no ordinary one either, as it can overcome them pretty much anywhere. We’re confident you’ve seen at least one specimen sleeping on either a carpet, the backseat, the toilet or, during the good days, a couch. No noise will disturb their slumber, be it a loud movie, group laughter or even a Roman cavalry marching towards them.

Reports state that some older specimens can actually be woken up by the smell of a fresh joint, but only for its duration. Strangers should not fear their company, as the hibernating bear is more likely to not even notice your presence, than to interact with it.

Characterized by their seemingly infinite wisdom in the occult arts of cannabis science, alchemists are essentially the warlocks of marijuana consumption.

With unusual tools and a wide variety of THC products in their backpacks, alchemists can grant their followers unimaginable levels of cannabis trips. This knowledge originates from countless experiments conducted on their own selves, as well as from roughly 4 YouTube videos they’ve watched while high.

Alchemists can balance the potency of each individual strain, in combination with the paper’s texture and aroma perfectly, and with a last magic formula cited to the Bic lighter’s flame, the ritual completes. By smoking the product of the alchemist’s craftsmanship, individuals can send their consciousness back in time to witness the fall of Constantinople, or perhaps into the future.

Extremely difficult to find, Alchemists are intelligent, cunning beings, with strong spiritual bonds to the Zodiac and other similar bullsh!t girls in their 20s believe in.

If you do happen to encounter one, be cautious, as they will inevitably offer you a quick meal, usually consisting of raw mushrooms. That meal will open up a portal in your mind, allowing the most weirdest thoughts to materialize into the physical world, which believe me, is more messed up than anything you’re thinking of right now…

Written, directed, produced, re-written and forgotten about until last night by one specimen of each species.

More stories from Varga Norbi and writers in Potent and other communities.