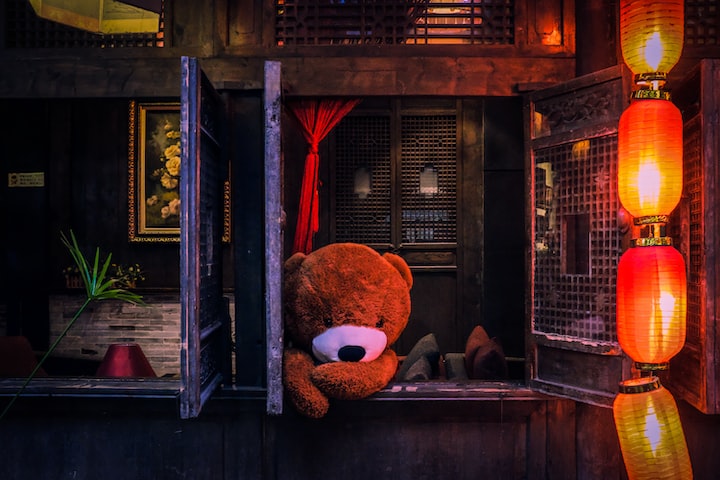 Photo by YIFEI CHEN on Unsplash

You change your face every single day

within our crazy and cozy room

that is honeycombed between jail cells in our chaotic simulation,

You change your face every time I pay you a visit before dawn,

around our all-powerful witching hour

so my spirit will become infused with inspiration like an embryo in its mother's womb.

You change your face every time music plays

to show approval or lack thereof

with your eyes staring at the coming day

and contemplating along an Epicurean byway.

Teddy is your brand name; your real name is gone

beneath the karma of slave labor and night's gloom

before we arrive at liberation

but our cities are twiddling their thumbs before the apocalypse

underneath our firmament which is polluted with exhaust and fumes

from what we require for food, work, heat, and showers

sinking into a sea of doom.

But our solar system is just one rainbow date

among cosmic scores of billions.

a puckery starburst with cabin fever in Aaru

above this hell listening to Amy Winehouse and The Doox

that liberated you near their theater of the absurd in 666 Square:

"Devils of demons or gods and goddesses for a painterly day

Pacific peacemaker sold down the subterranean Styx and Lethe rivers

to Paradise or Siberia. Or the tangerine sea

so an anomaly towards an anodyne curse

down the street from your house of sorcery?

the scat of gold but not the spiritual gold of truth

that is harder to attain

manufacturing a delusion of gold

distorting reality down to its bits

by tempting the rabble.

The selfless witch stirring people in her cauldron

eroding the incarnations of grand canyons.

For my reactionary words are much too uncouth

I'm an ungrateful spoiled brat who hates his nation

not a con artist who makes millions

below a Christmas capital winter sky that brings melancholy fits

of terror or neurosis on our holiday

around a solar martyr's fake pagan birthday used to groom

our people into subservience to be the last bastion

of turning the other cheek or worse

for nowhere and one-bedroom apartments are our only holidays,

Adam's apples on executioners' blocks after enduring struggle sessions at the confession booth.

not the elite cult of few,

the one percent who don't really care about civilians

a young man reacts to a bum with moody snakiness

and with a baneful tongue begins his story:

"The Penis and Testicles are works of beauty and I'm not ashamed to say I like them more than Woman's Flowers. A painting of Byron made me say I wish I could sleep with that beautiful Man--one in a million. Although my Stick was used for Ladies, I did rub Sticks with a Brazilian. It was my only Dicks experience; you bums had none. We let fear dictate how we used our Dicks and you lost decades, but I've found my Groom."

MALE AMATEUR is not accepting comments at the moment

More stories from MALE AMATEUR and writers in Poets and other communities.