Out Where The Desert Breaks.

by Scott Carnahan about a month ago in vintage

Up a freeway onramp speeds a motorcycle, a classic Triumph Bonneville, thundering its way onto the Santa Monica Freeway. Slicing into traffic, weaving its way around late night commuters.

The bike zooms through an interchange with the San Diego Freeway and continues straight onto the Rosa parks Freeway. Texas Tuxedo, bandanna, open face helmet with snap on windscreen. Eyes glare as she speeds her way east toward Downtown Los Angeles.

The bike slices around cars with precision. On a massive T.V. billboard the time reads 1:11, white light shines on her face her eyes cold and focused. She glances at the massive numbers, a smirk crosses her face. Right on time.

Wrenching back her wrist, making the beast below her howl. Releasing her rage into the night, screaming by way of gasoline. Eastward beyond the sky-high lights of Downtown, off into the ever lasting grid of light decorated and divided with ribbons of red and white.

She slows after passing The Long Beach Freeway, out where the Highway Patrol picks off drunks. This is no first ride. On the back of her helmet a crescent moon with the tips pointed up.

Up and over Forest Lawn into Pomona where the grid of lights explodes into a vast valley. An inland empire of suburbs expanding off into the night, the bike descends the grade into the field of tungsten light lit like a field of stars. Past signs for commuter farms, ranchos turned strip malls. Rialto, San Bernardino, and finally Redlands.

At the base of the San Bernardino range, an 11,499 foot wall fending off the desert. The crescent moon crosses the mountains, the moonlight shimmers atop the mountain’s snow.

She continues to speed east, the lights on the side of the road are becoming less frequent. The road cutting south toward the San Jacinto Mountains, She is coming toward the end of Southern California’s urban sprawl. To where the two mountain ranges create a gateway into the desert, held at bay.

The bike crosses into the small valley that is the transfer zone into the arid wind of the Sonoran desert, the Mojave’s hotter neighbor. Out past the casino, the heat is felt immediately, the warmth that unleashes a familiarity of childhood. Close now.

The bike speeds back up at the sight of a large patch of flashing red lights, high above the freeway. Large wind turbines blowing in the desert wind.

She cranks the gas passing under a sign for the Desert Cities, then continuing onto the Sonny Bono freeway past Palm Springs. Out into Indio where the city loses steam and falls behind and Sonny Bono is replaced by Dr. June McCarroll and eventually left behind to become the Christopher Columbus Transcontinental Highway. Interstate Ten. The main east-west artery of the American South.

Top speed into the black of a desert night, speeding away from the city, an outbound train soaring out to where that overwhelming sense of freedom lives. Into that sweet void, the darkness that lies beyond the safety of the city’s lights. To where the stars are free to shine and the road opens up.

Out where the desert breaks.

The moon hangs in the sky, similar to her helmet. Sending a strange light onto the desert. With no other cars on the road she flicks on cruise control, clicks off her light, and is suddenly standing up. Balancing on the bike, soaring with arms outstretched.

The engine roars out into the hot night, flying across the moonlit sands of the desert.

A coyote howls at the distant drone of the bike. 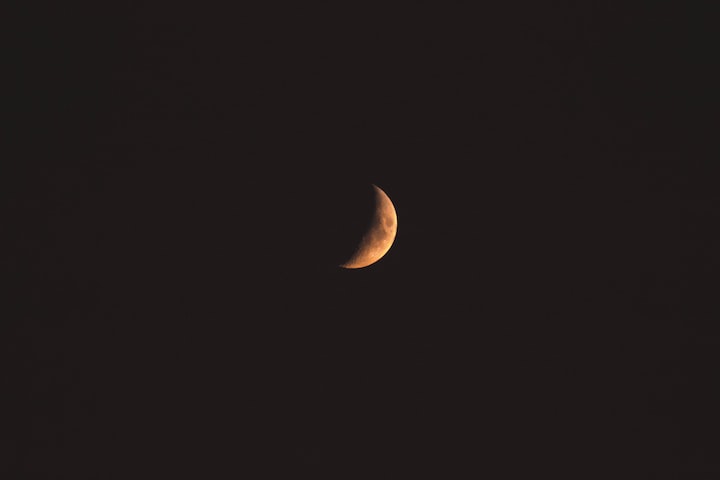 By Mat Reding on Unsplash

The T.V. billboard shows 4:15 as the bike flies by, back west. The lights below have removed those from the sky, back down the onramp she goes.

Into a quiet neighborhood full of parked cars, she cuts the engine and rolls the bike the last few blocks to a fancy house. She pushes the bike back into her garage.

Taking off her helmet to reveal chin length hair, she rests the helmet on top of the bike. Sneaks inside, tossing the keys in a bowl. She walks quietly to a nearby door and peers inside. Standing in the crib is a baby, she laughs when she sees her mom.

Creatures of the night, Mother picks up Daughter and they peer out the window together watching the moon set over the ocean. Off to bed, goodnights are said. Into the master bedroom and her snoring husband.

She takes off her clothes, revealing a tattoo on her ribs. A coyote, howling at the moon. Naked, she slides into bed. Into the arms of her husband, who does not wake one bit.

Her hands still tremble from the adrenaline, her face is still bitten from the wind, her hair smells like the freedom of the road.

Finally she can sleep. 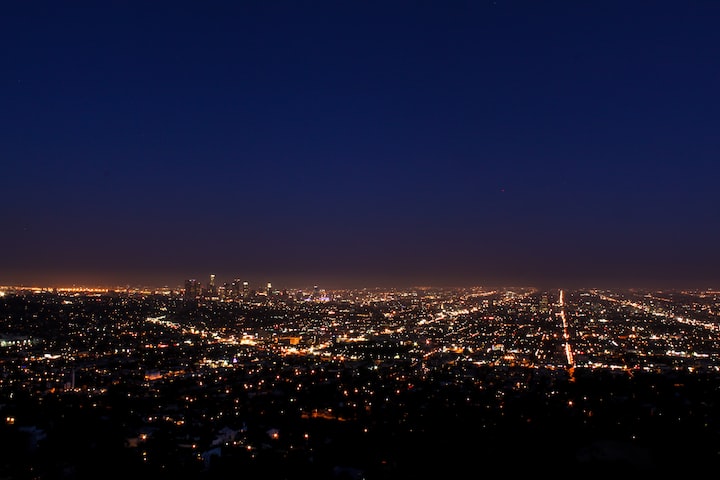 I’m a story obsessed thunderstorm junkie armed with a journal and a pocket full of crystals. Held up in Los Angeles. Comedy will save us. ScottJCarnahan.com

See all posts by Scott Carnahan →