The Capuchin Monkeys of Costa Rica. .

Unlike our sloths, these monkeys don't smile much! One of the four species of monkeys found here in paradise. . 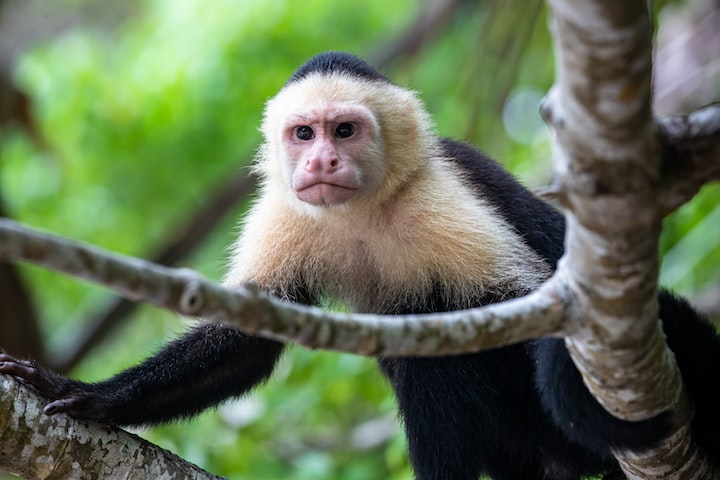 Photo by Stephanie LeBlanc on Unsplash

"Capuchin" comes from a group of friars named, "The Order of Friars Minor Capuchin", an offshoot from the Franciscans, who wear brown robes with large hoods. When Portuguese explorers reached the Americas around the 15th century, they found small monkeys whose coloring resembled these friars, especially when in their robes with hoods down. . and they were named accordingly. When first studied, scientists described this species as such. . "their muzzles of a tanned color, with the lighter color around their eyes that melts into the white at the front. Their cheeks give them the look that involuntarily reminds us of the appearance that historically in our country represents ignorance, laziness and sensuality." They seemed to have had no respect for this noble beast!

These monkeys are wild, aggressive and certainly should not be kept as pets! Yet I have seen many people hand feed these little buggers. One bite on the finger will certainly be a strong deterrent from feeding them the second time! DON'T FEED the MONKEYS!

With their cute faces and charming antics, capuchin monkeys have appeared in all sorts of performances. Victorian organ grinders had capuchins that danced and collected coins from those watching the show! These monkeys were even dressed in cute little jockey outfits and made to ride racing greyhounds. They’ve also appeared in movies, such as "Pirates of the Caribbean". As a side note, this species has also at times been trained to assist paraplegics. They are taught how to fetch items that the patient needs, open doors for them and keep them company. Amazing little creatures! Apparently, they are easy to teach. .

The capuchin monkey is seen throughout Costa Rica. Also called "white-faced monkeys", these small primates are recognized as the most intelligent monkey in Costa Rica. They are native to Central and South America and are frequently seen in many of Costa Rica's national parks. A few years ago, we stayed in Manuel Antonio and I remember, while sitting at our outdoor table eating lunch one beautiful day, we were visited by a couple of them. . begging for food. At $12 a plate, they went away sad and hungry!

These monkeys are omnivorous and highly active, living in troops of up to 40 members. They also walk on the ground more than other New World Monkeys. Considered to be the most intelligent, they have been observed using tools and adapting easily to human behavior.

In Costa Rica, you can commonly see white-faced monkeys in Manuel Antonio, Osa Peninsula, Monteverde, Arenal, Nicoya, Tortuguero and Palo Verde. They are especially common in Manuel Antonio National Park, where they are known to steal food from tourists. Again. . please do not feed the animals.

White-faced monkeys are also known as being "jumpers"! They can pounce up to 11 feet. They use their athletic skills to get from one tree to another. This is how they spend a typically day. . staying hidden in the trees, sleeping quite a bit and always looking for food. You will occasionally see them on the ground as well, when they are looking for water to drink. They sleep up in the trees at night interwoven between the branches. They have a varied diet, eating insects, fruits, crabs, small lizards and frogs, berries and fruits. We saw one eating from a round Pringles tube full of potato chips. Some crazy tourist thought they were doing the monkey a favor by feeding them something that they deemed as a "treat". . yea, right!

The white-faced monkeys are threatened by many natural predators, which include large cats, birds, snakes and crocodiles. They always appear nervous simply because they are always on the lookout for their enemies!

I would suggest that prior to your visit to Costa Rica, be sure to do some research on all of the animal species found here. Learn about their habitat, the history behind the animals. . where they came from, if they are endangered and where to find them. With hundreds of thousands of animal species here, if the capuchin monkey doesn't excite you, I am certain that you will find one that does! Remember that Costa Rica is the size of West Virginia, but presents to us over 5% of the world's biodiversity.

We urge you to visit Costa Rica as soon as you can and get up close and personal with the capuchin monkey! Pura Vida!

Costa Rica is a magical place. Since November, 2002, when I first visited this country, I have been in love with the people, the culture, its biodiversity, the food. . everything about it makes me happy! Now I share my excitement with you!

More stories from Skip Licht and writers in Petlife and other communities.