by Janeth Boose 11 months ago in bird
Report Story 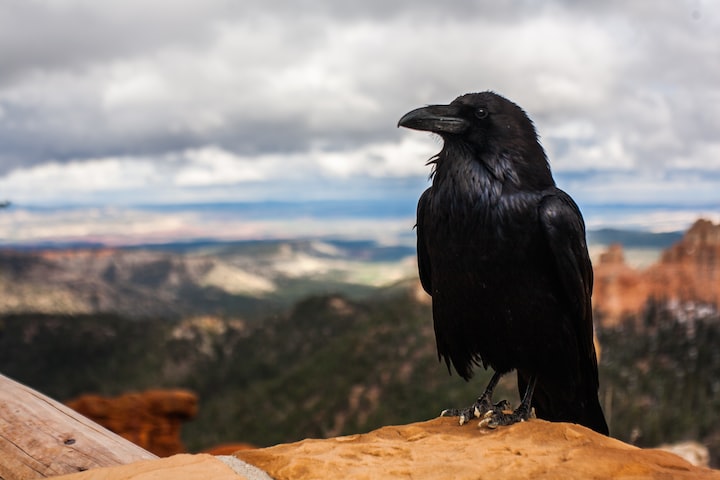 Photo by Tyler Quiring on Unsplash

I can sing like a bird if you ask me to.

That is, if the bird is a crow. I don't know how I learned to do that, but I'm really good at it and I'm very proud of that. When I learned that I could caw just like a crow, I felt somehow connected to these birds. Ridiculous, I know, but it led me to the life changing realization that these are my favorite birds.

Okay, it's not really life changing. However, if you're as indecisive as I am, picking anything at all is an accomplishment. Therefore, I have accomplished having a favorite bird. I'm glad it is what it is, because over the years I have found that although crows may seem particularly uninteresting to most people, they're complex creatures for those who take the time to get to know them.

In fact, crows are known to be one of the most intelligent animals. They recognize faces, hold funerals for their dead, keep grudges, and they even gossip! If only we could understand them, I bet we'd find that they know how to spill some tea!

Truly, crows are fascinating creatures. Let me introduce you to some cool stuff they do.

Yes, not only do crows hold funerals for their dead by gathering around them, but they also become detectives looking for the cause of death. The crows study their dead relatives searching for signs of what happened, and through their studies they learn about new threats so they're better able to stay away from harm.

Usually, crows mate for life. During nesting, if these crows have already had chicks, these chicks will defend their parent's nest while the parents are gone. They defend the nest from racoons, owls, and other animals. Some even stay for half a decade to help the parents out!

When crows are not nesting, the entire family joins other families into a group called communal roosting. This allows the crows to exchange resources and information with other crows, and they even have a training system in place. Older members that know what they're doing when searching for food may invite a less experienced member to join, showing them to food sites and helping them become familiar with the area.

Science can be fun, really. To study the behavior of crows, scientists bought two Halloween masks. One mask resembled Dick Cheney, and the other resembled a caveman. They used the caveman mask to threaten the birds, and a Dick Cheney mask as a control.

Over a few months, the crows would begin greeting the scientists in caveman masks with anger and even attacking them, but they would simply not care about the scientists with the Dick Cheney masks.

This lasted for five entire years, through generations of crows. Even the crows who had not been alive to witness why the people in cavemen masks were threatening to the previous generations, would still angrily approach the scientists wearing said mask. This meant that the grudge against the cavemen scientists was passed along through generations!

Yes, maybe it's weird that I find it fun to caw like a crow, and that the fact that I can do that somehow makes me like crows more. But that has allowed me to look into how complex these creatures are beneath their dark, plain exterior.

Maybe I identify with that. I am always observing, and I am usually quiet. If anyone saw me out, they might find me too quiet, too boring. But in reality, my mind is a complex place. And only a few people get to explore it, and that is if they really put in the work to get to know me.

So I can caw like a crow if you ask me to, but I probably won't.

More stories from Janeth Boose and writers in Petlife and other communities.