Are You a Mosquito Magnet?

by Amber Blaize 2 years ago in wild animals

The good news is Bill Gates is coming to the rescue 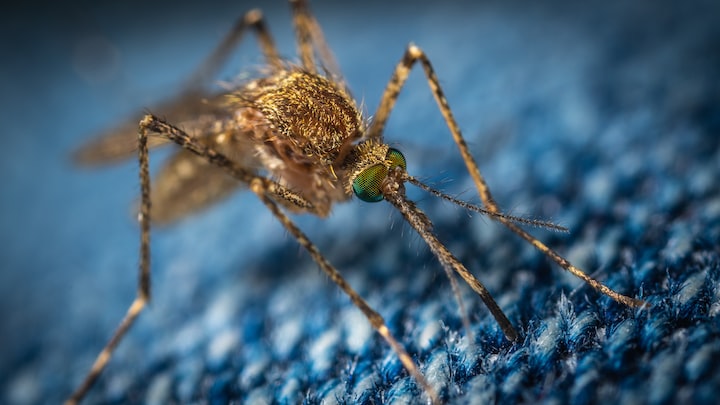 Photo by Егор Камелев on Unsplash

Mosquitos are smarter than most people realize.

They have four well-developed senses (sight, smell, taste, and hearing), a capacity for making decisions, and have developed flavour preferences — yes they like some of us more than others, based on how we taste.

Ranking in the top spot on a poll of Most Annoying Insects, Fifth place on Pest World, and Fourth place on the Rentokil site, they really are the bane of the insect world. And for good reason — Mozzie’s carry a whole host of diseases — malaria, West Nile virus, yellow fever and dengue fever.

Each year, around 250 million new cases of malaria emerge killing around 800,000 people annually. They are mostly children under five and pregnant women — according to the World Health Organisation.

When a mosquito contracts malaria gametocytes by feeding on an infected human, it takes 10 days for them to develop as mature parasites in their gut, and make their way to the salivary gland to be ready for transmission to the next host.

Once the malaria parasites are fully incubated inside the Mozzie, they are no longer just a nuisance, they become one of the deadliest insects on the planet. The next person this nipper feeds on will be the unlucky recipient of the parasites and contract malaria.

And along with their vector-borne diseases, Beelzebug’s and their demonic little mouth-parts are a nightmare during the warm weather, leaving us covered in itchy red lumps.

Even their humming noise is terrifying. They ensure even the soundest of sleepers will be jolted awake in trepidation, upon hearing that high pitched buzzing that sends us into a whirling dervish, grasping for the light switch.

A ringing in the ears that sounds like a hovering mosquito, brought on by the anticipation that mosquitoes WILL begin to torment you just as you are dozing off.

Are you a mosquito magnet?

First of all, it’s not in your head, those little drill bugs really do prefer some people to others.

Studies show that 20 percent of people are especially irresistible to the flying terrors.

“High attractor types” is what Jonathan Day, a professor of medical entomology at the University of Florida in Vero Beach, calls members of that unfortunate group.

Day says that the two most compelling factors in our mosquito attractive ratings are sight and smell. Who said mosquitos weren’t shallow — they simply don’t care about your personality!

Eating marmite (due to it being packed with vitamin B-12 ) is rumoured to repel them, whilst bananas are believed to raise your attractiveness — Sadly, none of these are true.

The only proven thing is drinking beer, makes you more attractive (to mozzies at least) as it breaks down into lactic acid.

And sadly in the chemical war against the blood-sucking parasites, we have inadvertently created some super-skeeters.

The problem with a lot of pesticides is there’s a period at the end of their effectiveness when the intervention allows for survivors, so natural selection ends up creating a mosquito population that is resistant to the insecticide. Great.

But scientists think the following factors likely do come into play. Some of these we can’t do much about, but anything to help avoid the bleeders and reduce the bites is worth the effort.

So while scientists still don’t yet have a cure, they do have a number of ideas regarding why some of us are more delicious to mosquitos than others.

Here are some of the factors that could play a role:

Unsurprisingly it’s all about your blood for mosquitoes. Adult male mosquitoes can survive on nectar for nourishment, but females rely on the protein in our blood for the production of eggs. These are the ones that are constantly harassing us for our vital fluids.

So it’s little surprise that some blood types may be more desirable than others.

Research in a controlled setting has discovered that people with Type O blood twice as attractive to the Mitsy’s, than those with Type A blood; Type B people were in the middle.

In addition, 85 percent of people produce a secretion that signals what blood type they are; and naturally, mosquitoes are drawn to those 85 percent, regardless of blood type.

One of the key ways mosquitoes locate their targets is by using an organ called a maxillary palp, to detect carbon dioxide.

Carbon dioxide is a powerful attractant because it travels a long way, and Mosquitos are able to distinguish between ambient levels of the gas and those coming from a host.

And they can sense carbon dioxide up to 165 feet away; so the more one exhales, the more attractive they become. Larger people exhale more, this is one of the reasons why children often get bitten less than adults.

Also since we breathe through the nose and mouth, the snipes are naturally attracted to our heads, which explains the whole “mosquitoes buzzing about the ears all night” saga.

As well as using a built-in carbon dioxide detector, Mosquitoes also have a taste for other bodily scents. They can track down victims through lactic acid, uric acid, ammonia, and other compounds emitted in our sweat.

They also like people who have higher body temperatures. Strenuous exercise increases the build-up of lactic acid and heat in your body, so whilst genetic factors “influence the amount of uric acid and other substances naturally emitted by each person, making some people more easily found by mosquitoes than others”, a hot sweaty person must be like a banquet for them — all those couch potatoes can rejoice.

Research has also shown that the types and amount of bacteria on one’s skin can play a role in making us a flashing neon diner sign for mosquitoes as well.

Our skin is naturally teeming with microscopic life, and the whole microcosmos on our skin gives us a distinct fragrance. In another study, a group of men was divided into 2 groups — those who were highly attractive to mosquitoes and those who were not.

The ones the mosquitos rated delicious, had more of certain microbes on their skin than the ones they found less attractive, but fewer types — a larger community, but less diverse. The bacteria factor could also explain why some mosquitoes are drawn to ankles and feet, an especially ripe source of our bacteria. Yummy.

Turns out mosquitoes are also rather partial to having a beer with their evening meal. During another study, researchers found that significantly more mosquitoes landed on study participants after they had drunk a 12-ounce beer, than before they drank it.

The scientists figured that it was due to increased ethanol content in sweat and skin temperature from consuming the brew, but they were unable to find the exact correlation, just that it happened. So their affinity for drinkers is something of a mystery, but it does seem to be a thing.

According to experts, overweight or obese people tend to have higher resting metabolic rates, which may make them more attractive to the Nighthawks. However, exercising to lose that weight also increases your attractiveness to the winged beasts. It’s a no-win situation.

So as well as having built-in carbon dioxide radars, the swamp angel’s also used their eyes to target victims. Seriously — no one is safe.

Day explains that mosquitoes are highly visual, especially later in the afternoon. Their first mode of searching for humans delicacies is through vision before they resort to sniffing us out.

Research shows wearing dark colours (green, black, and red) makes you easier to spot, whereas white or pale colours are not as easy for them to see. Why? “Mosquitoes have problems flying in even a slight wind, and so they keep close to the ground,” Day explains. Down there, they look up to spot their next meal by comparing your silhouette to the horizon. Therefore dark colours stand out, while light shades blend in. Clever.

At the same time, lots of motion also distinguishes you from your surroundings as you no longer blend in. So if you’re moving around or gesturing a lot, you may as well have a flashing neon sign and an arrow pointing to you, “Ladies eat for free!” (Remember, only the females bite!)

Regardless of whether it’s expressed through blood type, metabolism, or other factors, underlying genetic factors are estimated to account for 85 percent of the variability between people in their appeal to mosquitoes. Unfortunately, we don’t (yet) have a way of modifying our genes, but there are ways to deter the skeeters…

Researchers have started looking at creating the next generation of insect repellants.

Using chromatography to isolate the particular chemicals the less desirable mozzie-meal people emit, scientists at the UK’s Rothamsted Research lab have found that these natural repellers tend to excrete a handful of substances that mosquitoes don’t seem to find appealing.

By incorporating these molecules into bug sprays, they hope to make it possible for a Type O, beer-guzzling, exercising, pregnant woman in a black shirt to ward off mosquitoes!

Some tips to prevent the ‘squito’s biting you:

If, despite taking precautions, you are still unlucky enough to get bitten by these persistent pests, try the following:

But it’s not all bad news.

According to the Gates Foundation, the Scientists at Oxitec are using Mosquitos as weapons of mass destruction against the war on Malaria. Yup, there are now genetically engineered skeeters that are being created to eradicate malaria.

The scientists at Oxitec, the UK-based subsidiary of global GMO giant Intrexon, have made a name for themselves in the pest-prevention business by making mosquitoes and other insects that can’t produce offspring.

Now Oxitec is putting its patented Friendly™ tech inside malaria’s main host in the Western Hemisphere. The company intends to have “self-limiting” skeeters ready for field trials soon.

Because mosquitos are resilient and clever foes, capable of developing resistance to pesticides and even behaviour modifications that help them to evade eradication, the Gates Foundation’s $2 billion investment in eradicating malaria includes support for high-tech approaches, such as genetically-modified “friendly” mosquitos that don’t carry malaria, and a malaria vaccine that can protect people from the disease wherever they go.

And that really is good news.

More stories from Amber Blaize and writers in Petlife and other communities.