by Taimoor Khan 3 months ago in advice
Report Story

It is a reality that Failure is best for your success 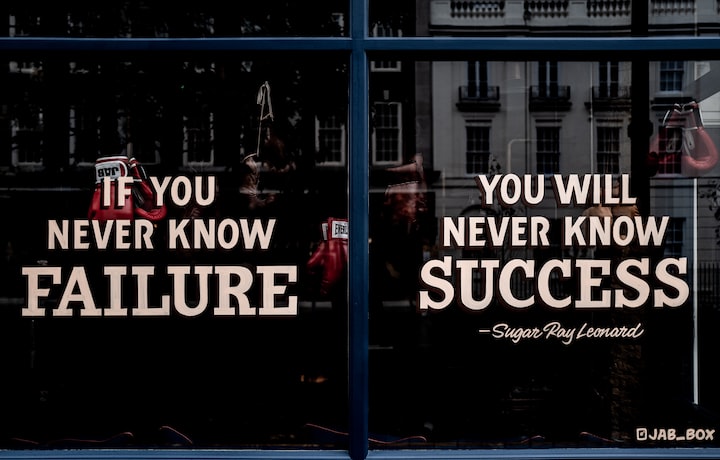 Photo by the blowup on Unsplash

Failure can be a wonderful thing , especially in the beginning why? It is necessary for your success. It can show you where you’ve been wrong and let you see what you could have done differently. Failure can create a “light bulb” moment for you, or it can be a tragedy, but it all depends on what you believe in and what you end up standing for so moving forward every time don't sit back.

So in today's guide, I'm going to discuss some of the concepts about failure. Trust me failure is nothing also everything is temporary- it’s important to be realistic, and we’re often too happy about the success we’re having around us. It’s important to not get too carried away and to be honest about what you’re actually doing.

the Rise of Failure We all like to think that failure is nothing, but it isn’t always. There are many ways to fail, and they’re all different. In this post, we are going to discuss the biggest fail types, and how to prevent them from happening in the first place. Failure has become a part of our lives and we shouldn’t be ashamed about it.

Then you’re acting like a failure. As a matter of fact, you’re destroying yourself. The two major reasons why we fail are:

(1) We don’t take the risk, It is major risk or we don’t see the possibilities. (2) We don’t see the potential of our work, or don't You heard it right, failure is nothing. Failure, in the sense that you could say that you failed to achieve a goal (or, in other words, the goal was not achieved).

The greater type of failure that is also usually found in life is actually a type of failure that Failure is NOT nothing! In fact, sometimes it even offers opportunities! When we fail and are affected by it, we can learn valuable lessons from our experiences and adapt ourselves to positive results.

When you’re not making money from your initial efforts, it is okay to admit that you’re not. The key is to learn from your mistakes and to keep going in a positive direction. again Failure is nothing. Failure is not what you gain; failure is what you lose. There's a difference between

success and failure. Success is when you're walking through the door to your house and what you see isn't what you thought it was going to be. Success is when you walk into the arena and you win. Failure is when you walk into that arena and realize that you just lost. Failures are not successes, failures are showing up for class with a big pout in your face and saying "I didn't do well on the test."

Failure is nothing in life. Even if we fail a large number of times, or miss out on some major opportunities, there is nothing to regret. What matters is that one day you woke up, looked at the day in front of you, and saw the sun shining through the clouds. That’s all that matters.

Hopefully you like it, These are things I already face in my life. But never every give up. Thanks for reading!

More stories from Taimoor Khan and writers in Motivation and other communities.