by Peter Burns 17 days ago in advice

How to be as productive as one of the world's greatest comedians. 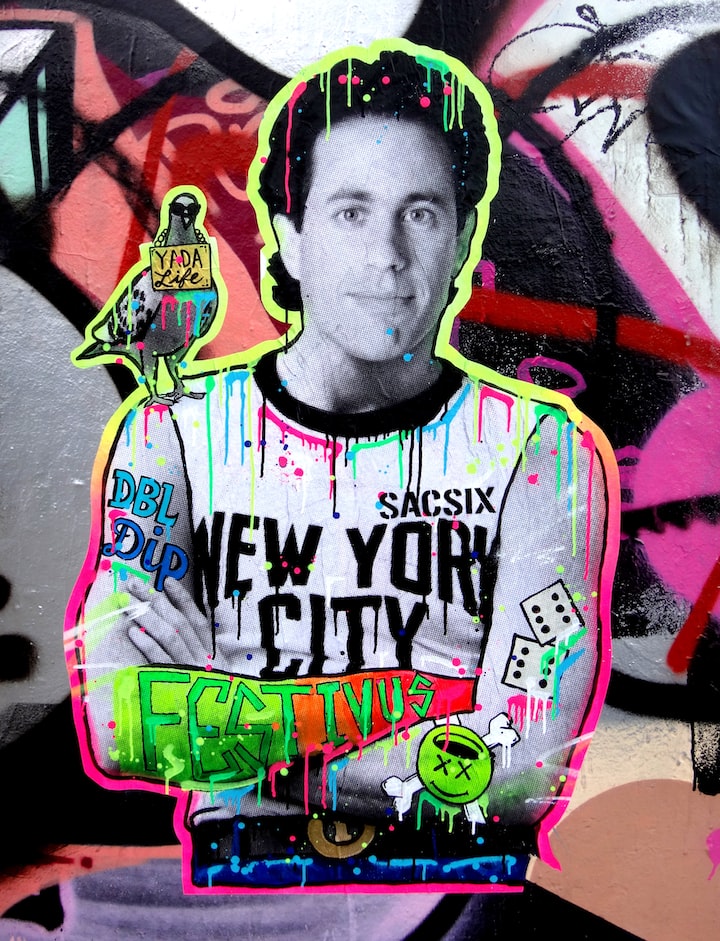 “No one else has his work ethic or his clarity of vision, his passion for the craft.”

In the 1990’s, Jerry Seinfeld had the biggest comedy show on television. Legions of adoring fans would be glued to their screens whenever an episode was on. Going for 9 seasons straight, NBC offered Jerry the opportunity to do a 10th season, for 1 million dollars per episode. He turned it down.

Instead, the comedian went back to his first passion: stand-up. The man worth hundreds of millions of dollars decided to start from the bottom. As a huge star, he didn’t need to work for a living ever again. Yet here he was, in dingy smoke-filled underground clubs trying to make a bunch of drunk people laugh.

In 2002, a documentary about this process came out. Titled “Comedian”, it followed Jerry Seinfeld and another young comedian Orny Adams, as they went through their season of doing stand-up. It wasn’t all peaches and roses for Jerry. He still messed up from time to time.

There is one particular scene that is quite telling in revealing Jerry Seinfeld’s mindset. He bombs his routine, and comes off the set shaking his head. Looking at his friend he says:

“I fucking hate it.”

This little back and forth between Jerry and his friend showed what separated the comedian from the rest. It was his perspective. This one particularly bad performance didn’t end up clouding his self-image. It was just one set. He had done many more in the past, and knew that countless others were still to follow.

This type of thinking is what made Jerry Seinfeld so successful. It is one cog in the comedy star’s framework. It underpins his tremendous work ethic, and the way he organizes his craft.

Set Up a Process

“My guiding rule is systemize.”

It takes a long time, and almost constant failure, to create a stand-up routine that delivers guaranteed laughs. Going to open mic night at your local pub is an important part of the process for Jerry. This is where he first tests his new material, watching how the crowd reacts, and using it as feedback.

He then tweaks things, taking out stuff that doesn’t work, and in a process of continuous improvement goes back to test it again. The comedy genius has been consistent in applying this method since his meager beginnings in the 1970’s.

The secret to Seinfeld’s success is the process. Ever since he began, he has kept a series of yellow-pad notebooks, which he fills up with ideas for jokes. After organizing them meticulously, everything gets stored in a series of binders. It’s all part of the great comedian’s system, one that he has been implementing for the last 50 years.

Don’t Make it Open-Ended and Start Little by Little

The key according to Seinfeld is to make the process as controlled as possible. You need to put some sort of a time limit to all your productive sessions, at least when you are starting off. In an interview with Tim Ferriss, Jerry described the philosophy behind his bursts of effort.

If you are writing, exercising, or doing practically anything, your brain needs to know when it will end. That way, it can plan out its effort. However, when starting out be realistic with what you can do. If you can’t do an hour of intense effort, then do 15 or even 10 minutes. As Jerry explained in the interview, it’s important to start slowly and go step by step when building up your system.

How to Be Motivated

“My three rules for living: First, bust your ass. Second, pay attention. Learn from everything and everyone. My third rule: Fall in love. Fall in love with your street, your tennis game.”

The biggest problem that Jerry has faced in his career is consistent motivation. Just like the rest of us, there have been countless days when he just didn’t feel like doing anything, preferring to procrastinate. In the “Comedian” documentary, Jerry described one defining moment that solved this problem for him.

One day, he was out grabbing something to eat, when he saw a group of construction workers getting back to their work site after the lunch break. They didn’t seem to be too excited, but they were doing their duty nevertheless. That’s when it hit him. Why can’t he be like those construction workers?

Day in and day out, they haul their ass back to the construction site. No matter how they feel that day, they just do their job. Jerry’s job was comedy. If they can do their work, everyone can. That’s when the stand-up star decided to treat his job as a construction worker would. No matter how he feels that day, he just takes out his pads and writes.

Whenever feeling unmotivated, one question always gets Jerry back on track. What would a construction worker do?

“Comedians are not risk-takers, they are risk eliminators.”

In an interview, young comedian Brad Isaac shared the productivity advice he received from Jerry Seinfeld. One day, both were plying their trade in the same club, and Isaac didn’t hesitate to use the opportunity to ask Seinfeld for advice.

Seinfeld revealed to him his don’t break the chain technique. Its premise is quite simple. Get a big wall calendar, and a magic marker. Every day you spend writing jokes, you put an X on that day in the calendar.

“After a few days you’ll have a chain. Just keep at it and the chain will grow longer every day. You’ll like seeing that chain, especially when you get a few weeks under your belt. Your only job next is to not break the chain.” — Jerry Seinfeld

The secret to Seinfeld’s consistency is not breaking that chain. Even if you are sick, or just not motivated, force yourself to not break the chain. Whatever the endeavor, whether it is writing, learning, or exercising, don’t break the chain. That’s how you build habits.

Just Aim the Arrow and Try to Hit the Target

“The advice I would give the younger me — or any young person — would be: Keep your head up in failure and your head down in success.”

In his interview with Tim Ferris, Jerry Seinfeld gave us another peak at his approach. Millennia ago, the great Roman orator Cicero said that you should imagine yourself as an archer. You draw your bow, aim, and release. These parts are up to you.

Whether you hit the target is not always within your control. Just focus on the parts that you can control. Jerry Seinfeld uses a similar analogy to think of his own process. He pictures himself as an archer, and picks challenges to shoot for.

“So that to me is like an archery target, 50 yards away. Then I take out my bow and my arrow and I go, “Let me see if I can hit that. Let me see if I can create something that I could say to a room full of humans in a nightclub, that will make them see what I see in that.” — Jerry Seinfeld

Your reaction should not differ too much from when you hit the target or not. If successful, don’t let it get into your head. Continue on hustling. If unsuccessful, don’t beat yourself up, but instead learn from your mistakes and improve for next time.

I have used Jerry Seinfeld’s method in my own life to complete all kinds of personal projects. When I started writing my blog several years ago, I used the don’t break the chain strategy. I committed to publishing at least one article a month. That for me was a realistic target.

Whenever you are embarking on a project, whether it is for learning a skill, or just creating a new habit, remember to keep these tips from Jerry Seinfeld in mind:

“When you do it because you love it, then you can find yourself moving up and getting really good at something you wanted to be really good at.”

Note: I had previously shared this article on Jerry Seinfeld's productivity system here.

Peter is extremely curious and wants to know how everything works. He blogs at Renaissance Man Journal (http://gainweightjournal.com/).

See all posts by Peter Burns →