Why Am I Drawn Toward Failure? David Bowie Leads to A Writer's Epiphany

by Sean Patrick 3 days ago in career

I'm at a crossroads as a writer, caught between wanting to succeed and wanting to follow my bizarre muse. 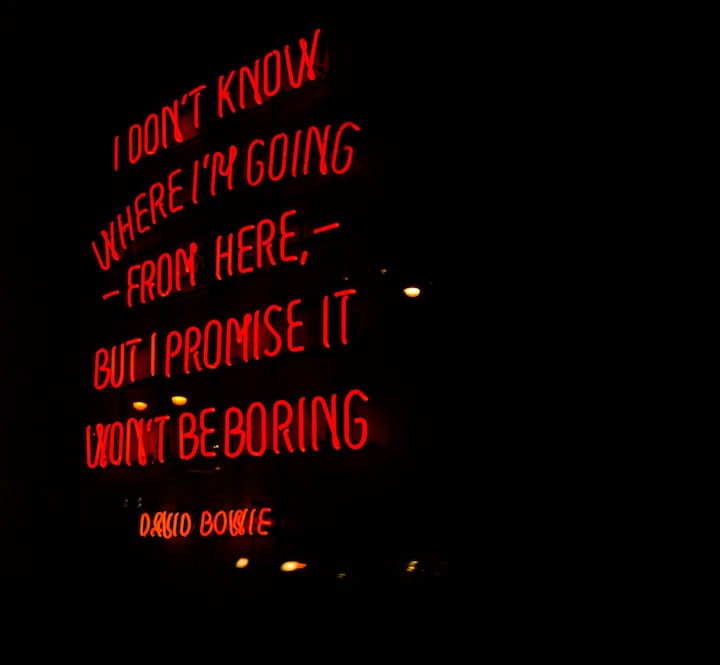 This is my brain on David Bowie.

Listening to Bowie I realized who I am as a writer and a person. I’ve been struggling lately with many different things, nothing beyond the average. except for my seeming colossal failure as a writer. I’m a failure as a writer, I can admit that. As of this writing, I have published nearly 800 pieces and I have barely a few nickels to rub together. I don’t know how to write for the algorithm and I don’t know that I would want to write for the algorithm. But that leaves me as a failed writer, in financial terms.

On a personal note, I’ve never felt better about my writing, my style. My most recent piece is on a foreign film called Take Me Somewhere Nice. It’s a Danish-Croatian set road dramedy. As I said before, I don’t know how to write for the algorithm and my brain would rather write a mixed-negative 1000 plus word review of a Danish-Croatian road movie than write something that might actually get read by someone other than my best friend.

I love this review. It’s the most me I’ve been in a long time. It just felt right. I wrote as me, I wrote with my style and it felt so good. I put on Bowie on my headphones and I drifted into my thoughts. It’s a movie review, but it is a movie review in a style that I feel is distinctly mine. You’d probably only know that because I am telling you, but I am telling you, this review of Take Me Somewhere Nice is me. It’s not that other things I’ve written recently about the Saw franchise or Hausu 1977 or In the Heights, weren’t me, but they weren't the complete me with my weirdness and foibles.

This review of Take Me Somewhere Nice was me in a way that rarely comes out. It’s me when I know who I am and lately that’s been missing from my life. Knowing who I am, really knowing, without insecurity or doubt. Fewer qualifying phrases, less writing in a way that I can disown an opinion later. Direct but fair. That’s how this felt to me. I may have written a mixed negative review but it was the most honest and real I’ve felt about something in a long time. I have no doubts whatsoever about this review.

I’m going to indulge and tell you how I see myself as I listen to Bowie and discover myself again. My writing in this review is weird, rhythmic, thoughtful and observant. It’s not flashy, the writing doesn’t call attention to itself, and I never indulge style at the expense of what I am writing about. My reviews are never about me, not the good ones anyway, they are my opinions but I don’t put myself over at the expense of a movie. I come at the movie from some odd angles and that's me, in the margins, odd but fair. No fear of how people will read it or read into what I am writing, no fear of any judgment, the rare complete belief in myself. I got that from listening to Bowie, something about his music just made me feel like me.

This review is going to be published and it will be the piece that is absolutely who I am as a writer and it is going to go almost entirely unread. The subject is too foreign, it doesn’t have big stars and the movie is only getting a minor theatrical release. The distributor of the movie won’t share my review, it’s not a glowing review, it’s mixed negative with a solid spotlight on the good things in the movie but not a recommendation for the movie in the end.

No one has much motivation to read this review and yet I am deeply compelled to write it. I am cutting my own throat by dedicating time and effort to an enterprise I know will not be fruitful and yet it is also the thing I am going to be most proud to have created. And I would be lying if I said that this doesn’t feel like a personal rejection. Seeing something I care about, something that I created that I am so proud of, fail, as this review inevitably will, is crushing and it hasn’t even happened yet.

I’m generally not a pessimistic person but I am a realist and the odds are against this review changing my flagging fortunes as a writer. I am torn between the desire to write things that will be successful and writing things that are a true expression of myself. I'm not sure why as even the pieces I was sure would be hits lately have been major misses. Nevertheless, this piece is something that just feels so right, so oddly personal without being overt about why it means so much to me.

David Bowie has me wondering if I am having one of those midlife crises that guys on 80's TV dramas were always having. I'm 45 and a mostly failed writer and film critic. I am proud of the work I have done but I cannot sustain myself with self satisfaction. The approval of friends is wonderful but their praise can't buy me a tank of gas. practical concerns are tearing at my soul and I still chose to write more than a thousand words about a Danish-Croatian road movie.

And all because David Bowie makes me more of who I am. I chose to listen to Bowie on this occasion as I were compelled by forces beyond my understanding. I sat down to write about Take Me Somewhere Nice and a force in the universe told me, Bowie. I put on Space Oddity and the words just began to flow. I reached a writer's nirvana, the zone. That space where you feel invincible, where you feel as if a force greater than you is guiding your work. It's a heady feeling and it doesn't come along often enough for anyone, let alone a failing writer sharing passionate thoughts about a foreign film for an audience of no one.

Where am I going with this? I have no idea. Honestly, this my first writing blog and while I should have a point or some wisdom to share, I don't. I'm resigned to failure but I am in love with my own work. I will love and share my review of Take Me Somewhere Nice and I will die tiny deaths for everyday it sits unread and I will eventually write about the next Danish-Croatian road dramedy that comes along.

Well, actually, my next piece is going to be about a documentary that I just saw that debuts at Tribeca soon. It too has almost no built in audience but I will write it anyway and maybe that's the moral. Maybe, despite my fear of destitution and the fear of not having money for food, I must continue writing things I feel this good about. Maybe I should always listen to Bowie and always let myself be a little weird. Even if it means I am forever unread.

career
Sean Patrick
Read next: Why Denny's Is the Perfect Starter Job for a Cook
Sean Patrick