The Twisted Tale of a Wilted White Rose. 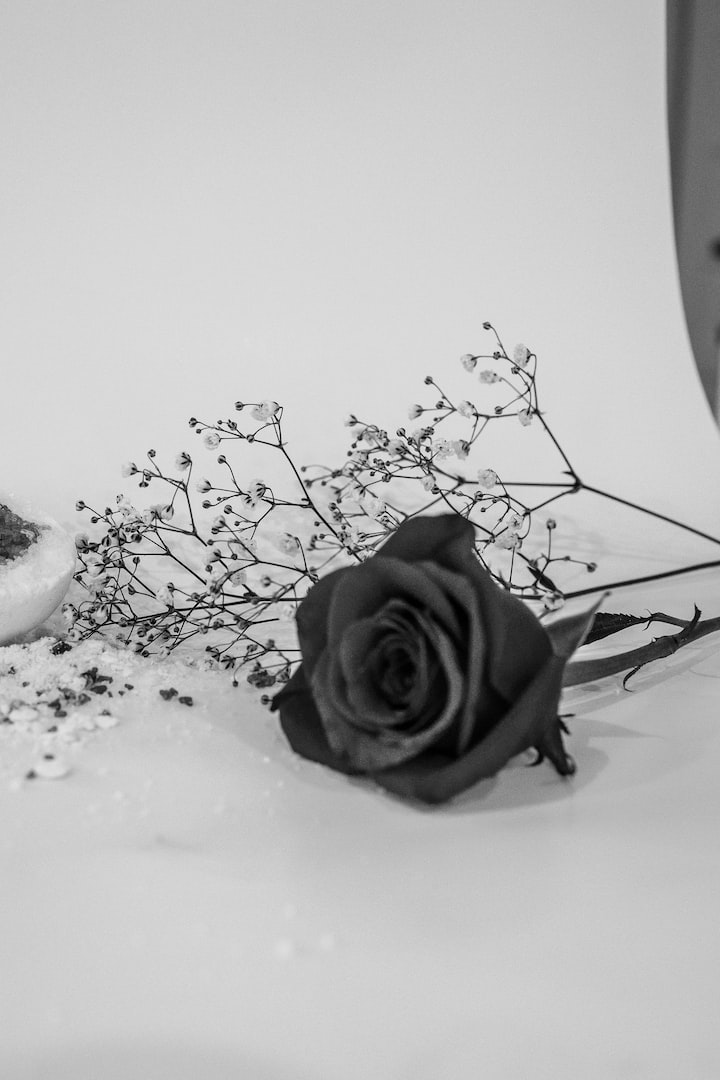 Photo by Mathilde Langevin on Unsplash

New. Fresh. Beautiful. Lively. Everything most days were, for most people, but a glimpse of what I dreamed mine would be like. Colorful. All these but a few hopes that my days would begin like they used to.

I had been slowly drowning in the dark waters of limbo. One that I began to feel guilty of. Responsible for. My daily dose of melancholy had exceeded the limit. My heart, with time, grew heavy with remorse. A blackness had descended upon my being. The atmosphere in my mind had become toxic. I was drowning. Funny enough, I did not react. I became passively aware of all I was feeling. Many times, often away in my mental space, going over that one moment. It was like it was in a loop. Other times I would be but a mere audience to the person I was at that moment. I began to look down on that person in retrospect. I grew livid every second I watched how I was. And I had resolved that indeed, I had lost. In this state of utter despair, all sense of self-confidence and image shattered.

The resentment pushed me deep under the surface of recognition. I was tired. I became conscious that; I might have been reeking. Reeking of desperation. Hurt. Guilt. Like a wound with flies breeding in. I felt like my presence violated others. I was damaged. Broken. I kept looking at myself like I was diseased. I felt cursed. I was completely void of any self-construct I had ever known. This, undisputedly, had been the hardest blow. There was no light at the end of the tunnel. There was no silver lining. There was just, me. Clothed in self-contempt was this damaged soul that was so irreparably broken. Gone.

I had never been so deep in the pit abyss of hopelessness as I was currently. Meaning in things I used to do was easily lost. I did not want people to see me, though they did. I could not tell anyone. What was there to tell? How would I begin? There was barely even a voice that would be audible enough to say what was hurting me. I would often try and say it out loud, in the comfort of my own company. But all that resulted was the heavy feeling in the gut that would lead to a mental meltdown. I grew almost comfortable with the fact that my mind had become a madhouse.

This was something I never thought would affect me as it did now. My soul was bleeding, and I could not stop it. I started getting used to it all. For a while, I thought the insanity would jump out. The bottle would burst. That reality would implode. But nope. Somehow, I felt like it was karmic. I was like the Catholic penance. Some sort of indemnification to the person I was. The blind fool I had been all this time. I had not seen that I had pushed away the only person who had seen me for who I was. I had not seen the potential this person saw in me. I had been blind to all the efforts made to ‘include’ me in this reality. One that I felt loved, adored, and appreciated. Most of all, recognized as I was. But this was something I turned away from, always seeking satisfaction in little excitements. I grew heavy with remorse. Even during this time, I was still blind to all those who cared. Those who wanted to know how I was genuinely. I had not heard their loving call to home. My friends from school had become more, they had become family. But I had not realized this.

I would despise myself for being such a friend to me. I was utterly ashamed of the personality I bore within. My psyche had grown worn out. I was somewhere between grief and depression, the ultimate proverbial rock and hard place. I had lost an integral part of who I was when I shooed my best friend away from my life. It was at this time I knew loneliness in my bones. My brain was tattooed with pain. Insomnia got me used to the darkness and the sound of silence became noise. I could find peace no more. I was restless. My heart was barely keeping up with all the trauma I was putting myself through. Every time I closed my eyes, I found myself in front of a mirror in my mind. The image would often ask, ‘…are you happy?’ ‘...is this what you wanted?’. Sometimes it would just stare back in disgust. In anger. With spite.

I cannot in any world bear the sadness I felt at that time now like I did then. I wanted out. The emotional burnout I had was draining me of what was left. I had to put my foot down. I just had no idea how.

I incidentally came across this book. It was the salvation I so badly needed. My redemption. Finding Me by Viola Davies, opened my eyes. It was my epiphany. I saw more sense in one statement than in any second at that time. ‘Forgiveness is giving up hope that the past would have been different.’ This was my breaking point. This became my threshold of hope. My light at the end of the tunnel. The silver lining, I begged the Universe for. I questioned all I had known about the current person I had been now. And the worth of what I was going after. And I saw vanity in it all. In a way, I felt like I deserved what I was going through. I had taken pride in something so foolish, an ego I fed for ages. To what end? This was not me. The days that followed became easier. I found joy in them. I cherished everyone I spent those days with. This was who I truly was.

I think I would say, I had a reconnaissance of souls. I needed to see who I had become. What I had done and how this affected the life that surrounded me. And I was disgusted every moment of it all. But it was this time I saw who I was. I embraced who I was. I embraced all my flaws as my best friend had. I saw the world in a different light.

I had hope. I had butterflies. Of the future, what it beheld. It was so expectant! I felt optimistic, something I had not felt in a long time. I felt good. This falling out between pals had shown me something I needed to. As hurt as I was, and still am, I felt good about myself. I had changed. Emerged at the end, with something to hold on to, the hope that two distant souls would come together soon. A hope that I had merely buried this bridge almost burned down. I had resolved to be a better person. I decided that I would strive to know my best friend. I would try to make up for all I had brought on. All the time lost. I would be the friend my best friend deserved. The guy everyone deserved. The person the world deserves.

Taking note of the reflective moments in life. When the walls of reality melt down and the essence of time fades away. And all that's left is you and your mind space. I jolt what's in the mind space of my reality.

More stories from Jed Kimani and writers in Journal and other communities.