My biggest leap of faith

by D-Donohoe 2 months ago in career
Report Story

Let's hope it pays off 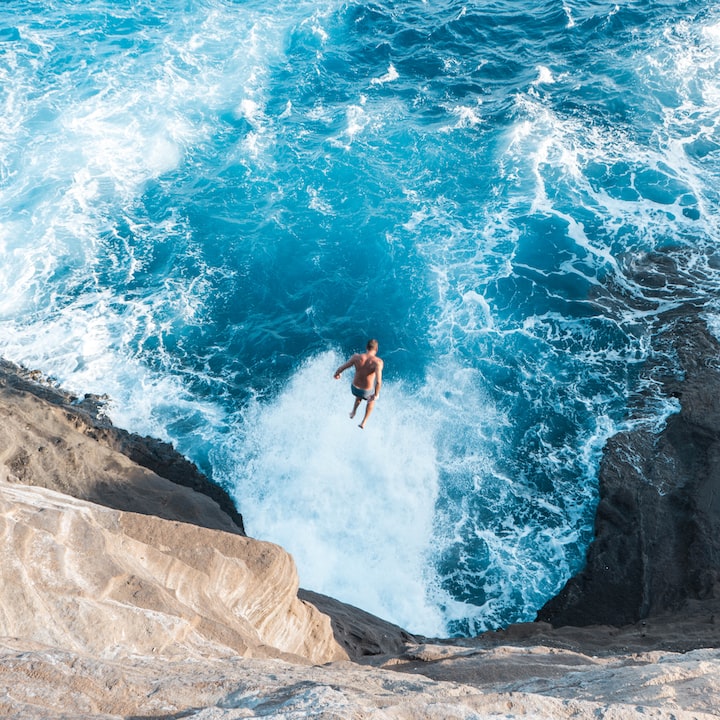 Photo by Kekai AhSam on Unsplash

If you asked me to pick some words to describe myself, I don’t think the phrase “risk averse” would ever come into play. I’ve worked in risky occupations, taken calculated risks on jobs, and engaged in thrill-seeking activities.

But yesterday, I gave my boss the required amount of notice that I would be resigning, without so much as even applying for a new job. I have a wife and a child, a mortgage, car repayments, as well as a lot of other financial obligations.

What will I do?

Now there are three potential back-ups:

Backup number 1: I buy a lotto ticket every week. Maybe at some point in the next three months, my numbers will come up and I’ll be a millionaire. Look the odds aren’t exactly stacked in my favor, but it’s the old saying “you’ve got to be in it, to win it”. Alright, so that’s probably the least likely.

Backup number 2: Finally my writing on Vocal will be noticed by someone with deep pockets who wants to pay me a staggering sum of money to write my novel, or write their biography, or write my autobiography and then claim it’s their biography. Slightly more plausible than Backup number 1, but still not something I should be banking on (unless people would like to leave lots of tips at the end).

Backup number 3: I just use the next three months to find another job, I probably won’t secure the income I have gotten at this current job, but enough to pay bills. Yep, that’s the most likely so I shouldn’t spend too much time writing today when I should be polishing up my CV and putting in those applications.

So why would a guy on the verge of turning 50 make such a decision?

The answer is relatively simple, I believe that it’s the only choice I had.

I only started this job in January this year. Four days after starting, my dad died suddenly in a motorbike accident. That meant the next three weeks were spent at home helping Mom sort things out. I worked remotely during that time, whilst also preparing a funeral and writing a eulogy for my dad.

Now growing up, dad and I weren’t that close. Then I joined the police force, and we REALLY weren’t close then. But over the last five years, we started getting on a lot better. It was nice to have a close relationship with him after all this time, and I valued our conversations over the phone, as well as seeing how well he got on with my daughter.

When I finally got back to work, I was under a lot of pressure. I wasn’t coping with things and although I’d tell my boss that I was struggling he would ease off for a little bit and then just when I felt like I was getting back up again I’d get another knock, that would put me back down.

I found myself getting more and more anxious about going to work. I was a lot more withdrawn at home, and I could feel a lot of my old depressive behaviors coming back after all these years.

A bit over a month ago I had to go home for a friend’s wedding. So, I took two weeks off so that my family and I could have a proper break (because of COVID it was our first decent holiday in about three years). I turned my work phone off and wasn’t checking my emails. This was behavior that I have never engaged in previously. I would easily describe myself as someone who enjoyed being a workaholic.

That was two weeks of sheer bliss. I didn’t stress, I smiled again, and I was a much better husband and father. Until the night before I returned to work, where I felt withdrawn, anxious, and sick again. I gave it three more weeks hoping that things would improve but they didn’t.

Then I had to go into the hospital for a few checks after a few health issues, they identified a duodenal ulcer. The doctor told me that I’d have to cut out spicy foods, then I told him that I wasn’t a fan of spicy food and rarely ate it. Then he asked me if I had been under much pressure. The penny dropped.

Two days later I had a meeting scheduled with my boss where he wanted to give me feedback on my performance and asked me to tell him what my concerns were. I spent half that meeting in tears, explaining why I was the way I was. He suggested I think over the next two days about what I wanted.

My wife and I talked a lot about it, and eventually, she said to me “I’d rather you be happy than be earning as much money”. That made up my mind. That night I slept better than I had in years.

Yesterday morning, I met my boss for coffee before work and told him that I’d be finishing up in three months’ time. He said he was disappointed but understood. I told him that I wasn’t the sort of person who would take their foot off the pedal and will try to give him my best work before I leave. I will also need him to give me a good referee's report before I finish so best to keep him happy.

Now I must set about writing up a few compelling job applications.

Thanks for taking the time to read.

If you want to support me in my potential period of unemployment, please feel free to like, comment, or drop a tip (will not spend it on booze). Additionally, if you want me to write a humorous story about your life, please hit me up.

More stories from D-Donohoe and writers in Journal and other communities.