Woman in the Red Coat

a story of betrayal 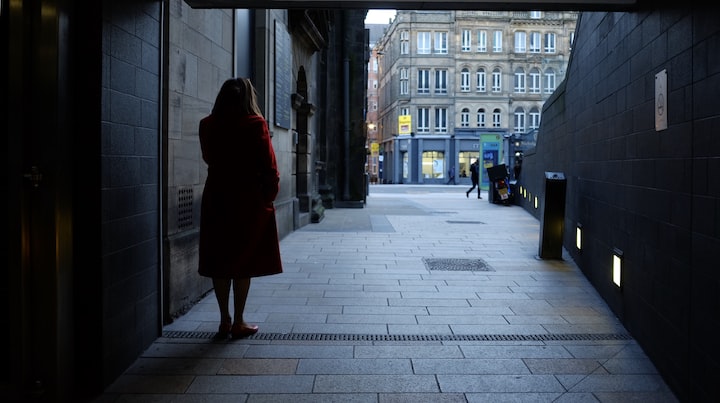 Photo by Quaid Lagan on Unsplash

I was standing in the line of the coffee shop, mentally preparing the conversation I would have with the barista. I’m always nervous in social situations. I do not converse easily with others. I knew she’d say good morning, then ask me how I am, followed by what I would want. I had to make sure I said quickly, good morning, fine, and a decaf americano. She would give me a funny look, and then ask me why decaf. I’d laugh and pay quickly so I didn’t have to explain that caffeine is the drug of choice of most people and I can’t buy into that concept. As the person in front of me finished their order, I took a deep breath and walked up to the counter. I waited for the girl to speak but instead, she turned around and had a coffee cup in her hand. She smiled, “your decaf americano sir” and she placed it on the counter when my hand didn’t reach out for it. I stood stunned and started to bumble, “thank--you, um, good morning, or thank you.” I reached into my back pocket but immediately dropped it on the floor. As I scrambled to pick it up she started to giggle. When I popped back upfront of the floor she spoke again, “it’s paid for by that lady over there” she pointed to a woman in a red coat. I gulped, and pulled a five-dollar bill out of my wallet, and put it in the tips jar. I smiled and grabbed the cup, and turned towards the woman in the red coat.

I couldn’t mentally start preparing for this conversation. This woman was sitting in the corner, at a two-seater table with a coffee in front of her. Unlike anyone else, she didn’t have a phone in her hand to distract her. She just stared out the window, intently. I walked up to her shyly, “thank you ma’am for the coffee” I managed to say evenly. She smiled at me and beckoned for me to sit in the seat across from her. I decided to quickly set and I held my coffee in my hands tightly. “Why didn’t you pay for the person behind you?” she asked incredulously. “I would have, but-um, I read an article that-um, said that the baristas don’t make good tips and are paid minimum wage usually and so I like to give that money back to them. Um, the people that come here can afford these coffees, you know so um- yeah” I explained. I was still staring at my coffee, the steam rising from the black liquid. The woman smirked and shook her head thoughtfully. “That is very generous of you,” she said. We sat in silence for a moment before I stammered, “um-how did you know what I ordered?” Again she smirked. “I have been watching you in this coffee shop for some time now. You order the same thing between 7:30 and 7:40 am on Tuesdays and Thursdays before school. You always look down, and answer the barista the same way as if it’s rehearsed.” She stopped speaking and looked at me. I glanced up from my coffee to notice her eyes were grey, with blue outlining her iris. I tried to force a chuckle, and take a sip of my coffee but it was still too hot and I burnt my tongue. I put the cup down quickly.

This time she laughed. She grabbed something from her pocket and slide it across the table to me. It was a card, and on the card was simply a phone number. She was standing up and simply said, “that is my number, and when you need help you call me. I know what you’ve done and so do some powerful people, the difference is, I will help keep you safe from them.” My eyes darted back in forth, they know. I stood up quickly and grabbed her arm, something completely out of character for me. “How long have they known?” I asked quickly. She looked taken back, but finally realized I had been playing a part; a part that I was going to have to leave behind. “They have known for a couple of weeks, it’s time Satoshi Nakamoto” she replied. I let go of her arm, and her hand slowly brushed through my hand. It was nice to see her again, it was nice to hear my name again. But it was time to move on. I left the shop and forgot my coffee.

I looked at my phone, and I saw it. My millionth bitcoin had finally finished being mined a couple of weeks ago. It was a complicated process I thought had been hypothetical until the moment it happened. Originally a theory I had devised in my thesis for college, I had a theory I could create this cryptocurrency that would be completely untraceable. The only issue would be how to make this cryptocurrency legitimate. Well, some hacking later I figured it out. And most, unfortunately, some bad people would love to be able to use a currency that left no paper or electric trial. So while one may be rich, no one would be able to know. And now, I had the originally mined bitcoins. I was so happy when the research had paid off, but now my life was in danger. I had gone into hiding months ago, taking on this bumbling fool’s persona to avoid detection. I went to my apartment, I had to get all my files and leave today. When I made it to the apartment, I realized something was wrong. The door was ajar. I tried to peer in and saw the red coat. I rushed in and saw the coat and note where my computer should have been. The note said; “If you want to see her again, bring all your research to this address by tomorrow morning, or she will be shark feed.”I collected myself quickly and packed a bag. My research was in one place they hadn’t thought to look, with me, in my head. They had Sandra, and I was going to have to figure out how to save her while also keeping this information to myself. I ran to my car and headed toward the marina.

The sun was setting by the time I made it to the parking lot. I looked for the boat I was supposed to go to, and finally found it. The U.S.S Xylocaine. It seemed gratuitous for a yacht. I stepped onto the yacht and was immediately jumped, as expected. When they lead me to the top, hands behind my back I was looking around for Sandra. Someone was sitting in the captain’s chair when I was finally brought up. Suddenly, I knew what was happening. “Sandra, why didn’t you just ask me for the research?” Sandra turned around in the chair, she wasn’t surprised, her feminine silhouette outlined by the setting sun. She looked at me, with a sadness I couldn’t describe. “I didn’t need it. I needed to make sure you didn’t do anything else with it so no one else had it. I am going to control the distribution and be the sole inheritor of the wealth. You might be brilliant, but you forget that I am even more brilliant than you. I need to know that I was the only one who knew how to do this. And now, I will be.” I was silent. She looked at me, “don’t you want me to monologue so you can try and figure out a way to save yourself?” I snorted at the suggestion, “Sandra, you always were funny, it seems you have underestimated me” and with that, I jumped overboard into the water.

I never saw Sandra again, she had been the person I trusted most. Now we both had the secret and would have to continue in hiding, and mining our bitcoins in secret. As we gained more, they would be released to the world, but the world would not learn the secret from me. This was survival for me, and in the wrong hands, this currency could change the way the markets were handled. I knew that I had to be more careful and not trust anyone, so I disappeared.

More stories from Jazz Carper and writers in Humans and other communities.