The Magic of Coffee Shops

by Olivia H 23 days ago in literature

Life-changing days rarely give you hints of their arrival. I was no exception to this rule. 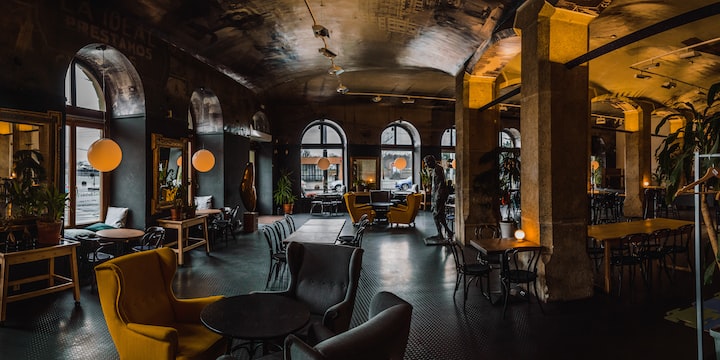 Photo by Sebastian Schuppik on Unsplash

Life-changing days rarely give you hints of their arrival. It’s rude, really. You wake up expecting to do the same things you did the day before and go to bed the same person you were when you awoke. I was no exception to this rule. On that one Tuesday morning—the Tuesday morning that would change everything—I did the same thing as always, with the flourish of your average unsuccessful young adult.

My day began with waking up in my shoebox of an apartment and taking an offensively mundane visit to my local coffee shop. Being a writer—sorry, let me rephrase. Being an extremely unemployed recent graduate and aspiring writer, it was practically my duty to rotate coffee shops at random, but I came to this one the most. For unknown reasons, this made me feel guilty, like having a favourite child when you really should like them all the same.

Let it be noted that I don’t frequent coffee shops on duty alone. I believe there is nothing in this world as comforting as a local coffee shop. The smell of coffee beans, the upholstered chairs, the light jazz music overlayed with clinking mugs and soft murmurs—it’s all perfect. I’ve always said that the right environments are like magic potions. Each ingredient is carefully measured and arranged so that alone they mean nothing, but together… magic! Coffee shops—and I’m talking your local mom and pop shop variety—are the best examples of this magic.

“Adriana!” I jumped involuntarily when the barista shouted my name. The almost-sharp tone cut through the buttery soft atmosphere of the shop and I hoped that was the only time she called my name. It wouldn’t be the first time my head got stuck in the clouds. I quickly snatched my mug—as if speed would erase any earlier lapses—and scuttled off to my usual chair in my usual corner.

Like most days, I opened my laptop and prayed that I would be graced by some miracle of inspiration. And like most days, it didn’t come. I worked in this fashion for about twenty minutes when I noticed a man sitting on the other end of the room. Tall, dark, and handsome didn’t cut it. He was some distance away and a little obscured by the (suddenly unwelcome) bulky furniture. Still, I felt a magnetic pull towards him.

I tried to focus back on my laptop, but the words just weren’t flowing today. It took all my power not to glance towards the mystery man and imagine what he was like. He looked kindly, like a tutor or a baker or some other profession that radiated warmth and help. Or maybe he was creative like a photographer or a screenwriter. If only I could see what he was doing here... I cursed the gorgeous plump chair that obscured his table from view.

He was definitely looking down at the table, reading perhaps? No, writing. Yes, definitely writing. Maybe he was a poet. That certainly fitted the coffee shop aesthetic. Only freelancers, the unemployed, and the rich sat in coffee shops at this time of day—I would know, having done a substantial stunt in two of the three (take your guess).

I tried going back to work again but it was no use. How could I conjure up words when all I could conjure was the untold story of this mystery man? Part of me wondered, or rather hoped, that this was the beginning of some grand story where I was the main character. I marvelled at the possibility of being the star of my very own coffee shop meet-cute. You know, the kind meet-cute that seemed to find its way into all rom coms. When I thought about it, I couldn’t actually come up with a single movie that had one of these scenes, but I felt like it must exist somewhere, right? Or maybe this was just one of those cultural myths where everyone thinks it happened but it didn’t, like the oft-misquoted “Luke, I am your father” or seeing the Loch Ness Monster.

I nearly jumped for the second time that day when a woman tripped into the mystery man’s table. As she recovered, they started up a conversation and I strained to hear what they said, though I was much too far away. I sighed as a disappointing realization entered my mind. If this was the beginning of a story, then it was not I but this woman who was the main character. Admittedly, she seemed very nice. Not to mention she was also tall, dark, and handsome. She probably deserved a coffee shop story.

I imagined how her story might go as I sipped my room temperature coffee. I must have been imagining for long because when I came to, she and the mystery man were gone. I felt vaguely disappointed that my people-watching was cut short, but then I noticed something on the ground and my heart picked up. Was it a book? Did the mystery man perhaps leave behind his favourite novel?

I darted towards the book, first scooping up my laptop in one hand and purse and coffee in the other. For some reason, I felt self-conscious about this move and pretended I was only moving to charge my laptop. I chastised myself for being silly, no one was even watching me. But all the same, I kept my eyes alert as I reached for the book.

Except it wasn’t a book—it was a notebook. How delicious! This little black notebook could be my window into the mystery man’s world. I checked the first page for a name: “Return to Alex R” was all it said. So the mystery man was called Alex. I almost preferred calling him mystery man. There was a phone number below the name but a coffee stain that took up a great deal of the page had smudged most of the numbers beyond legibility. I felt a sudden antagonism towards coffee and without thinking pushed my own mug away.

At least the pages of the notebook were a gift beyond belief. There were little scraps of poems, grocery lists, the definitions of complex words, notebook entries—and all written so beautifully. And it wasn’t just beautiful language, Alex had the most beautiful handwriting. Even the abstract doodles that cluttered the margins pulled me in.

By the grace of this little black book slipping to the ground, I had a skeleton of Alex. He had a meeting with a private investigator months ago (what a man of mystery indeed). Last week, he wrote down the definition of “terpsichorean” (one who dances professionally) and then crossed it out for “dancer” (a sensible move, I thought). And today, he journaled about the comforting atmosphere of the coffee shop (is this my soulmate?). Almost automatically, my brain started filling in the bits between the skeleton and invented the rest of him.

There wasn’t enough to satisfy my curiosity, there never is. But in this case, there really wasn’t enough. About halfway through the book, the writing stopped, and I irrationally flipped past the remaining blank ones. The audacity of Alex to forget this half-finished journal—though I suppose that was better than not leaving anything behind at all. Still, there was a full story somewhere and I felt determined to find it. I grabbed a pen out of my pocket and wrote the date on the first blank page. It looked wrong, somehow. I tried again, opting for a purple pen this time and it looked much better. It felt less disrespectful to distinguish between my writing and his.

Inspiration is a beautiful thing. The miracle I always asked for had arrived and my writer’s block had gone. In this little black notebook, I wrote down word after word until I had a sentence, then I had a page, and eventually, I had a novel.

A year later, my life had utterly and irrevocably changed. I was no longer extremely unemployed. I was a published writer, which meant I was only a little unemployed. My book—“A whimsical tale beginning in a coffee shop and ending in adventure” as it is vaguely described on the back cover—was a bigger success than I could have imagined. In the criminally large and generally unheard amount of twenty thousand dollars, my advance made the most significant difference to my life. Notably, it allowed me to upgrade out of the old shoebox I lived in and into a much newer, shinier shoebox. The only downside was that I moved far across town, no longer within regular walking distance of my old favourite coffee shop.

From time to time, I felt a little insecure that I had based my new book on the notebook of Alex—or mystery man as I still liked to call him. But it was very loosely based on him, well, hardly a base at all. The story was far too inventive and “whimsical” to have hit upon reality, but I sometimes thought that I didn’t deserve what I got when it felt like Alex was just gifted to me whole. Of course, the snippets of text in his little black notebook were just tiny snippets, but filling in Alex’s personality had felt like being handed a crossword puzzle that had been nearly completed and I only had to fill in a couple squares.

One morning, I was walking to work (read: the closest coffee shop) when I decided to take an extra-long stroll to my old favourite shop. Why not spend my day at that comforting place, for old time’s sake? I was happy to find my old favourite chair vacant and quickly eased into the familiar ritual of sipping coffee, dreaming, and writing. Except now my writing came much more effortlessly—it’s incredible what the promise of future money can do for inspiration. I had just about hit a block when I noticed a tall, attractive woman step cautiously towards my table.

I nodded, trying to figure out where I knew this familiar-looking woman from.

She shifted from foot to foot, “I’m a big fan of your book, I recognize you from the jacket cover.” This was not the first time this had happened, not that it happened often. “Maybe this is weird to say but I felt really connected with the main character and I wondered if we had met before or something?” A thought was starting to register in my brain faster than I could understand.

She continued, “It’s just, sometimes I felt like the protagonist could have been me in another life, if I were a funnier, far more daring, and a man.” She chuckled. “I’m Alex by the way, Alex Rodriguez.”

And suddenly, it all clicked together. The little black notebook, her name, her beautiful features and tall stature. She was Alex R. It was not the mystery man at the coffee shop but the attractive woman who bumped into his table. It was she who had dropped the book, not him. It was her life that inspired me and took me from aspiring writer to novelist.

I thought I might feel bad about it but instead I felt happy or even relieved. Somehow meeting the real Alex confirmed that my novel came from me and wasn’t just handed to me fully formed.

I smiled warmly and invited her to sit down with me. I rifled in my bag for the little black notebook—her notebook—that I carried as a sort of talisman and placed it before her wide eyes. Then she broke into a huge belly laugh. It was the most beautiful and contagious laugh I’d ever heard.

A Japanese-Chinese-Canadian writing with love from (you guessed it) Canada.

See all posts by Olivia H →