The Importance of Anonymity

by Lily Nielsen 23 days ago in fact or fiction

Find your soulmate by looking into their soul, and not their eyes 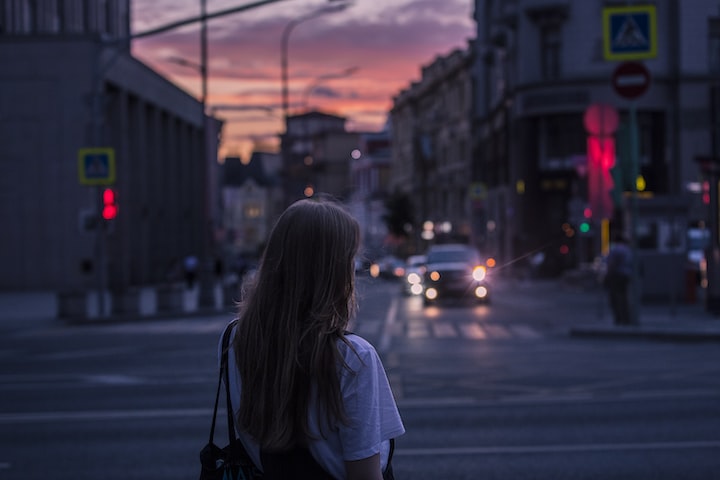 I sighed, pushing my face deeper into the pillow. Lately sleep had been evading me, but tonight was the worst. I had been tossing and turning all night and the most unpleasant part was my husband snoring away next to me.

I opened one eye slowly and looked at the person next to me. He was facing me, which was odd. He usually faced away from me while we slept. He always said that I drooled and it was unattractive. Self consciously, I wiped my mouth with the back of my hand and stared at my husband.

Rick and I had been married for ten long years. We met when I was a sommelier at a fancy French restaurant called Cave Vin Noire. He was the head chef so naturally our paths crossed. I was a young impressionable woman at twenty-three and I knew I loved him from the first moment I saw him.

My very first day of the job, I walked through the kitchen to get to the wine cellar and I saw him. My heart must have skipped a beat and my breathing came to a halt. He had on a crisp white double-breasted buttoned up chef’s jacket and a white hat which he later told me was called a toque. His vibrant blue eyes blazed angrily at one of the waiters. I saw dark hair peeking out from under his white hat. I felt like time had stopped and then I realized I hadn’t been breathing. I shook my head and crept past him towards the wine cellar. In a lot of ways Rick was like the wine that I had spent so much time with. He was bitter and intense, but he was also sweet and full-bodied. I wished that I could understand him like I understood wine, but he was more hidden away. There were times that I would get a hint of him, a note of something, but then it was gone. I felt like I had to be a sommelier with him too.

After we had been dating for a while, Rick had told me that all he remembered from that day was a waiter who had spilled something that took him forty minutes to make. The day that I remember so vividly, the day I caught a glimpse of my future, is the day that he has almost no recollection of.

No one gets married thinking they’re going to fall out of love. But I did. We both did. And I think that is what drove us to do the unthinkable.

“What do you have planned for tonight?” Rick asked as he seasoned the eggs he was cooking for breakfast. I hesitated to respond and focused on pouring the orange juice in the glass. “Nothing tonight. Early night for me.” I hated when we talked, he always talked about the most boring, mundane things. And then I hated myself for feeling that way about my husband. “I have some errands to do for the restaurant, meetings and such. I won’t be home until late.” He said as he put the skillet of eggs on the table between us. I didn’t look up from the toast that I buttered. “Do you want toast?”

“Thanks though.” Rick added as an afterthought. “You’re welcome.” I took a small bite of my toast and reveled at the crunch and the burst of butter on my taste buds.

After fifteen minutes of our forks clattering against our plates and awkward silence. Rick grabbed his coat and left without another word. I waited for another fifteen minutes to make sure he wasn’t coming back and then I excitedly hurried over to my laptop in our office room.

I smiled as I typed the words that had made me so happy these past few months. Anonymity.com. It was a dating website that I had read about for people who are more interested forming connections with others that don’t revolve around looks. When I first made an account, it was just out of interest. I was intrigued with a dating website that no one knows what anyone looks like. I hadn’t planned on chatting with someone until I saw his profile.

TheGingerBreadBoy. I giggled at his username and read the rest of his profile.

Likes: long walks on the beach at midnight, long drives at night, music, and art.

Looking For: a companion to have intellectual conversations with over a glass of Merlot.

Before I could even comprehend what I was doing, I had messaged him. Something about him drew me in, I guessed by his profile he was a writer or a poet which was something I aspired to be one day. I think that’s what connected us. My username was AspiringWriter88. Our first few messages back and forth were getting to know each other. I didn’t know what he looked like and I didn’t even know his name. But there was something about TheGingerBreadBoy that made me smile when I thought about him. From the first time we chatted together online, I knew that I had feelings for him. He was like nothing I had ever encountered. He was so open and engaged, willing to talk about anything and everything. He was the complete opposite of what I had been living with for the past ten years. He was polite and asked all the right questions and made me really feel seen for the first time in years.

It turns out he wasn’t a writer but he did want to eventually write his own cookbook. We got to know each other very well over the course of a few months. And I casually asked where he lived. He responded quickly and said he lived in NYC. My heart fluttered when I read that he lived in the exact same place as me. I knew in my heart, it was meant to be. I asked him to meet me at a restaurant called Country Grille. It was down the street from me, he said it was very close to him as well. I told him to look for a blonde in a bright pink dress, he wouldn’t be able to miss it.

After we had made a plan to meet up, my thoughts went to Rick. I had a sinking feeling in my stomach. Part of me thought I still had feelings for Rick, but we weren’t in love with each other. We were stuck in a relationship that not only lacked love, but we didn’t even know each other anymore. And that made me more sad than anything. Rick didn’t excite me any longer, he didn’t challenge me and he didn’t awaken feelings inside me like he used to. So I didn’t feel bad about an innocent dinner with a mystery man I met online who made me feel things I never thought would be possible again.

We agreed to meet at the restaurant around seven o’clock. I bought a bright pink dress, curled my blonde hair and did my makeup. I looked the best I’ve looked in years. I was finally on my way to happiness again.

I was waiting for a while, nervously with my hands in my lap. I twisted my wedding ring around my finger and realized I should take it off. I quickly put it in my purse.

I had sat down with my back facing the door. I wanted us to see each other at the same time. Checking my watch for what must have been the hundredth time, I heard footsteps behind me and my stomach dropped anxiously.

“Aspiring writer eighty-eight?” A deep, familiar, full-bodied voice said behind me. I knew that voice. My body tensed in my chair as I turned around slowly. The shock registered on our faces at the same time. “Rick?” I asked, confused. “What are you…. how did you know my username….” I trailed off, trying to process what was going on. He sunk down into the chair across from me. His dark hair flopped against his forehead as he leaned forward, confusion and befuddlement still clouding his facial expression. I sat back in my chair, just as perplexed as he was, I was still trying to process what was happening.

We sat in silence for a while. The silence we had both grown so accustomed to. I wanted to say so many things, but I couldn’t voice the words. Finally, I found my voice. “You’re Gingerbread boy?” I asked quietly. It appeared he also lost his voice because all he could do was nod. “I’m so shocked,” I started slowly “out of all the hundreds of thousands of people on Anonymity.com….we somehow found each other.” He looked up gently and caught my gaze. For the first time in a long time, he made the butterflies awaken in my stomach.

“I didn’t know half those things about you.” I said with a smile. “And I had no idea you were so passionate about writing. Gracie, you’re an amazing writer.” He said, I could hear the genuineness in his voice and I saw the tenderness in his eyes and it made my heart swell.

“So I guess this is like our first date, isn’t it?” I laughed lightly as he grabbed a piece of bread and took a bite. “I suppose it is our first date in ten years.” He chuckled and took another bite.

“I’m glad to be on a first date with you, my dear. And I’m so sorry for everything. I’ll never ignore you again, and I’ll never stop loving you.” He grabbed my hand from across the table as a brunette waitress walked up and asked what we would like to drink.

I gazed lovingly at my husband and said, “I’ll have a glass of merlot.”

Just a small town girl, living in a lonely world looking for a city boy from South Detroit.

See all posts by Lily Nielsen →