by Allison Moore 9 months ago in fact or fiction 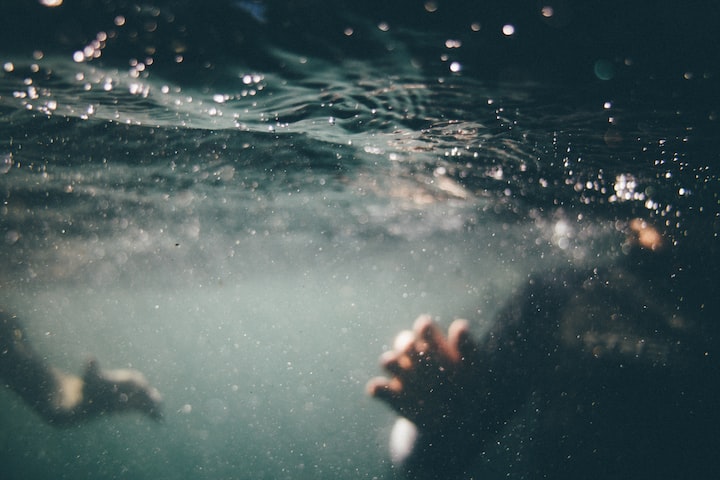 They threw me from the ship and I met the angry sea with my lungs.

It’s bad luck to have a woman aboard.

My hair swirled around me in dark tendrils as I struggled. Sinking, always sinking.

It was worth it.

Thick bubbles buoyed towards the surface in rapid succession as my body spasmed for air and the knotted rope running up my legs tightened and bit with my thrashing.

It was worth it.

The dark closed around me. Was that the sun up there? Why was it so far away? A halo of bright blue surrounded by black promised salvation. An empty promise.

The last bubble escaped my lips and water rushed in to fill the void.

But it was so, so worth it.

The sea had sung her luring song to me since the first time I toddled into her cold waves as a child. The sand squished between my toes and sank my ankles as the waves crashed in and hurried out. I followed the waves until the water pasted my dress to my thighs and belly and the sea spray filled my nose.

My father hauled me from the water and placed me safely ashore when I tried to dash towards the horizon, borne on receding seafoam.

I stood on soggy sand and watched the gulls dive into the water and rise again. Dive, rise. Dive, rise. They ate their fill of shiny fish and flew away, across the sea.

Where does it go? How far does it stretch? What is beyond the horizon, where deep green sea meets the sunrise sky?

From that day on, I ran to the ocean’s edge every chance I could. Every heartbroken, every joyous, every celebratory and sorrowful and mundane moment, I spent with the sea. I told her of my first love and the heart I thought I would never repair. I told her of my achievements and the failures I thought would crush me. I sat with her in silence and hugged my knees to my chest to watch the sky kiss her gently before the stars came out and I could not tell where the dark sea ended and the night sky began.

I guess what I really did was tell her everything I could about a little girl with big dreams.

Father always said, “Moras, you’ve got stars in your eyes. Best get them out so you can see.”

I told the sea about that too. I never did get those stars out of my eyes.

But, then again, I didn’t really try.

I sailed for a glorious three months before the crew found me out. My disguise as a cabin boy couldn’t withstand the scrutiny close quarters promotes.

The sea was cold the day I drowned. As I sank, naked save the rope wrapped around my wrists and legs, I found a steady calm curled inside my panic.

It was right, this end.

The sea pulled me into her deepest embrace, far from home—the farthest I’d ever been—and still not far enough. She was kind and drowned me swift.

And I began to change.

There is magic in the sea. Old and angry magic.

It hurt. My gods, it hurt. The echo of my snapping bones reached my muffled ears and I screamed but there was no air left in my lungs.

Water where water should not be.

I left my body, at least, I think I did.

And then… I breathed.

I used to carry a seashell with me when my father told me I could hear the sea inside. I held it to my ear whenever I was too far from the shore, too far to hear the crescendo crash and pull of her waves.

I hear her in my veins.

The sea is full of rage, or maybe I am, or maybe we are, my sisters and me. The same men who threw us into the sea for stupid superstition cull us sirens or mermaids or cursed. They know not our origin, that they themselves created us, that the more women they throw, the more men we drag into dark waters, the more ships we wreck upon the rocks. They don’t know we belonged to the sea long before we ever set foot on the creaking timbers of our first ship deck. Long before we drowned.

No one can separate us from our beloved sea now.

I drowned my first man on a peaceful, clear night.

A master hand painted the sunset and I swam on my back just beneath the surface to watch the painting change and fade. Regal sails jutted from the reef in the distance, sunken ship trying desperately to live. The sun’s last rays shone through the masts and torched the pitiful skeleton in black.

Around and around the salt-blasted dinghy. My sisters’ songs drifted through the sea to match the gentle slap of waves against the tiny boat’s side.

The dinghy groaned when I pulled myself from the water to greet its single occupant.

The sailor thought he would escape the crew’s fate. He was handsome, suntanned and broad-chested. Dare I say well-groomed.

My song snared him easily.

The sea claimed him quickly.

The pressure of the deep killed him before he had a chance to drown.

I learned to swim carefully, slowly, to keep them near the surface, where the pressure soothed and the moon’s glow shimmered through the water in an empty promise of air. There is hope in this kind of dying. So close to survival even as I squeeze them in arms made strong by water’s resistance, my scaled tail driving us in ever descending spirals.

I learned to leave their bones for the sea and consume the rest for myself.

The sea never asked for anything in return. Salvation free of charge. But I leave them for her all the same. I have nothing else to give her that doesn’t come from her. Every shell and rock and coral and pearl are hers.

We sirens are hers.

No one can separate us from the sea, for we were born of the sea, born on her shores as little girls with big dreams and a heartsong made of saltwater and sand and sea-tumbled stones. We didn’t know who our mother was until we met her at our drowning.

We were always destined for this. Born for it.

We were the kind of women who sailed on ships with superstitious men because dying at sea was better than living on shore.

We were the kind of women more saltwater than blood.

Who knew exactly how our stories would end and chose high masts and unfurled sails, regardless.

What we didn’t know was there is magic in the sea, and she was eager to welcome us home.