MRTU
by More Real Than U 2 months ago in literature

It’s not real until you experience it. 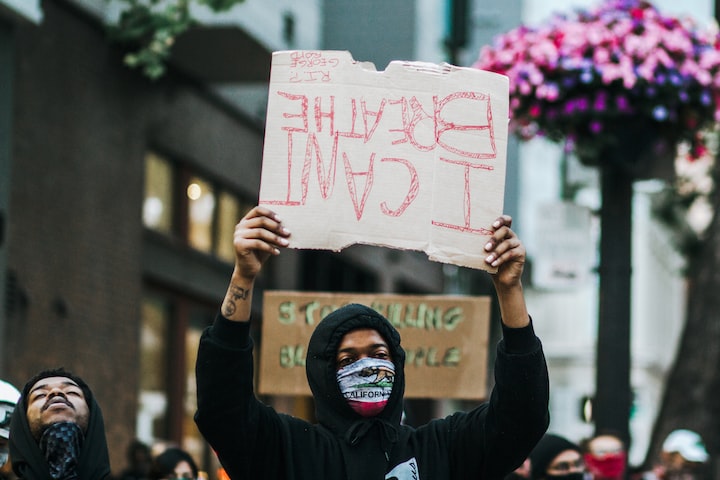 Photo by Gabe Pierce on Unsplash

“We won!” he said, beaming from ear to ear. I nodded in response. He was proud of his accomplishment. For him, settling this case was unprecedented, a note of celebrity, a chance for fame and more business. For me, the win was empty.

I flipped the check in my hands as the lawyer chattered away, looking through me as he continued to explain how we’d just made a difference, while outlining how both of our lives would be better.

Life was better before.

I appreciated his diligence and dedication throughout this journey. The intention was never about money, or so he said, it was about justice and equality. Those core American values everyone should uphold, and every American should benefit from, but somehow seem to skip minorities every so often.

A face case is what he called me. We know these things happen to black people all the time; we’ve seen the Amaud Abery, Breonna Taylor and George Floyd stories, and although my friends, colleagues and even family members took to the streets in protest, there was always a way to discredit them. We even had one of our own not choose our side, screaming through her social media platform with claims that George Floyd was a criminal.

As if that mattered.

But I still breathe.

The only reason I still draw breath is because I had the luck of validation. Otherwise, I’d be six feet under too.

This 20 thousand dollars should’ve to make me happy about that. An apology of sorts for my inconvenience, because money should erase the shame and embarrassment of having my rights violated after I exited my place of employment at an hour deemed too late for black people to be there.

The experience was surreal. My parents told me stories of racial injustice, but I never saw it happen to them, and it never happened to me. I now realize that I grew up in a bubble, sheltered from reality. The viral videos I’d see on social media felt intangible, commercial even. Embarrassingly, I admit I thought some were fake. I listened to the woman when she blamed the victim for his own death and inserted judgements of my own.

If only you didn’t resist…

Why did you have to cheat the store?

You would be alive right now…

Like petty crime excused murder. I get it now. I’ve felt it. The shock as the cops scurry towards you with their guns drawn, the fear coursing through your nerves as you realize one wrong move could trigger the response that might end your life.

“Drop the weapon” one cop screamed.

“I don’t have a weapon.” I said. My hands pointed skyward as I squinted from the brilliant flashing lights of the squad car.

I dropped the book and two cops rushed towards me, one forcing my arms behind me, and the other kicking the supposed weapon; my black book away so it could not do more damage.

My face hit the cold brick of the building as I felt the manacles tighten against my wrists.

“We got a call about someone suspicious.” cop one said. “What are you doing out here tonight?”

“Working.” I said, and spat out the pooling of blood from my mouth.

Cop 2 appeared with my book and whistled for cop one to join him. Cop one shoved me further into the wall before warning me not to make any moves.

I heard some hurried whispering and cop one screamed, “Damn!” as I realized they must have opened the book. Inside was a corporate photo of me along with a profile of my accomplishments, a gift from my team last year.

Both men rushed back to me.

“Listen, man, we were doing our job.” Cop one said.

“Right, because an 11x8 notebook looks like a gun, right?”

“Sir, I suggest you keep it moving.” Cop two offered.

I decided it was in my best interest to end the antagonistic stance. The incident shook me. I couldn’t let it go. I was ashamed, enraged, bewildered, so much so that I needed to take a day off to calm down. Then another, then another. Ultimately, I called a lawyer. I had to seek justice. Something had to change in order to force the police department’s inappropriate treatment. It had to stop. It was not ok.

This money, this check, meant nothing in the grand scheme of things. We need to do better.

I need to do better.

Now I just need a platform…