by Beth Carlberg about a year ago in literature
Report Story 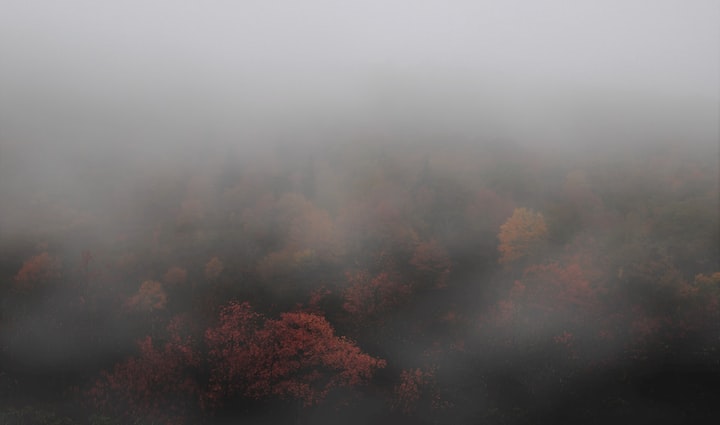 Photo by Erica Li on Unsplash

The gurgling stream sounded like a man being strangled. Isa'ray shuddered, and tried to ignore the sound.

Next to her, the child whimpered. Isa'ray slowed her ragged breathing and clutched trembling hands to her sides so the child wouldn't see her fear.

"What is your name?" she asked.

The child looked up at her through knotted, black hair. "Sa'tala."

"Sa'tala, I need you to be brave," Isa'ray stroked the child's wet cheek.

The body of Sa'tala's mother lay in the river; her blood tinted the water red. Her dress floated around her, looking like a white bubble. Her scarf still loosely curled through her limp fingers. The currents tugged at it, slowly pulling it away from her. Up on the bank was a bulge of shadow where the body of the priest lay. His white robes were smeared with mud and his neck bruised.

"What...what will happen to me?" Sa'tala whispered. "Momma is...is...is..." She began to shake. Curling against Isa'ray, she started to sob.

Isa'ray hugged Sa'tala tightly. "Hush. I will get you someplace safe."

A missing priest wouldn't be overlooked. If they found Sa'tala...Isa'ray shuddered and couldn't finish the thought. Still holding the girl, she stood up. Sa'tala wrapped her arms around Isa'ray's neck.

The grass scratched Isa'ray's calves as she edged past the bodies towards the main road. Her feet squelched in the muddy lane. Above them, the dark trees smothered the moonlight, and the path slanted away from the river and towards the city. In the dim outskirts, they came to Isa'ray's home, built with white stones that curved the starlight into ripples.

Isa'ray crept to the back of the house, and entered by the rickety back gate. Once inside her house, she carefully tiptoed up to her room, making sure to avoid the floorboards she knew squeaked. She gently laid the exhausted child on her bed.

"Let's wash the mud out of your hair," she whispered.

"How many people live in this house?" Sa'tala asked, with her eyes wide and glowing in the candlelight. She slowly turned her head, gaping at the marble fireplace and the dark, wooden bookshelves that cast long, wide shadows across the floor.

While Isa'ray was combing Sa'tala's hair, Sa'tala commented, "It's quiet. Where are all the men?"

"Our house was always full of men. They came to see momma."

Isa'ray frowned and stopped brushing. She shook her head and started combing again. "Those men won't come to visit me here."

"It's so white!" she gasped as Isa'ray pulled it out of the drawer.

"Momma..." she stopped. She picked at a loose string on the nightgown, which was clutched in her hands.

"Your momma did what?" Isa'ray urged.

"She washed my clothes in the river. They were never that white," she whispered.

Isa'ray rubbed one of Sa'tala's smooth ringlets between her fingers. "You need to get to sleep."

Sa'tala nodded and put the nightgown on. The short sleeves draped past the child's elbows and she tugged at the lacey collar. "This is itchy."

Isa'ray smiled and pulled out a softer nightgown.

After Sa'tala was asleep, Isa'ray curled in a chair and watched her. The moonlight cast a serene, white glow over her face. Isa'ray looked at the faded, black circle that was tattooed on the inside of Sa'tala's wrist; it marked her as the child of a prostitute. Both the child and mother were branded.

Eight years ago, she had seen that mark on another child's wrist. The child's trembling, cold hands had clung to her. The child's almond-shaped eyes had begged Isa'ray to do something. But she had shrugged the child away and stood there, watching as the mother killed her child. The mother was a prostitute, forbidden to have children. By law, she must kill her child. At least, that was the justification Isa'ray had told herself.

This time, Isa'ray had huddled at the base of a knobby tree and watched them. Droplets had fallen down on her from the trembling leaves.

"You whore!" The priest had thrust the dagger into the mother's abdomen up to its hilt. She crumpled onto the muddy bank.

"Stop!" the child sobbed, clutching at his white robes.

He shoved her down, and leapt on top of her. "Your life is forbidden!" He straddled her; his fingernails dug deep into her neck, as his hands clenched tighter and tighter. The child gagged and writhed. Her eyes wide and white; her mouth open in a soundless cry.

Behind him, the mother rose. She staggered towards him and hooked her scarf around his neck. He gurgled and thrashed; his purple lips moved, silently screaming.

The next evening, she huddled by the window. Because the child was so exhausted, Isa'ray hadn't woken her. The dark clouds made the sun look a pasty yellow. Misty rain still lingered on the window panes. She rubbed the crystal pendant, which hung from a silver chain down to her stomach. Her husband, Ha'rell, had given her when he proposed. He had been a commander in the cavalry. Last year, his unit was sent by the priests to help defend the eastern border.

She remembered the last sunrise before he left. She had huddled by the window, watching the red sunrise over the dark, dripping trees. Even though the gray horizon was warming to cold, she was cold. Ha'rell touched her arm to get her attention. Tentatively, he held out a cup of steaming tea, and the mug rattled in its saucer. His hand was trembling. Grateful, she sipped the dark liquid, tinted with honey. She spread her cold fingers around the warm ceramic. She looked up when Ha'rell sighed.

She sat by him on their bed. "Are you sure you want to do this?"

The muscles in his jaw bulged as he clenched his teeth. "I have no other choice. They will brand me a coward if I refuse."

She curled her arms around his chest. The pendant was pressed between them.

Even now, she could still hear his moans and see the bloody sheets twisted around him; the healers scuffling about; her father's heavy hand pressed around her waist; a sunken and white face staring back at her from a mirror; trembling as she felt Ha'rell's hand go limp; the void in his black eyes staring up at her.

The priests had told her he did not die in vain. But their words, even their laws, seemed empty to her now.

She looked at Sa'tala, sprawled out in the bulky bed, still asleep. Isa'ray sat on the edge of the bed and gently fingered one of Sa'tala's ringlets. She traced the tattoo on Sa'tala's wrist.

She sighed. She didn't want to wake Sa'tala; sleep was one harbor from reality. But they needed to leave because she had overhead the maids gossiping about the priest's death.

"There she 'as, dead as dat chair yur sitting on," one maid had said.

"She 'ad the mark," another maid whispered.

"Ya," the second maid clucked her tongue. "She 'ad a child."

At this point, Isa'ray had crept away. Now, she gently shook Sa'tala. "It's time to wake up."

Sa'tala stretched and opened her eyes. She frowned, "Where am I?"

Isa'ray stroked her cheek. "You're safe."

"Where is my momma?"

But before Isa'ray could answer, she saw Sa'tala's eyes widen. Sa'tala closed her eyes again and shuddered.

Isa'ray clutched Sa'tala against her. "I know what it is like," she whispered, "to wake up and know someone you never thought could die is..." Her throat was dry and she couldn't speak past the lump in it.

Sa'tala looked up at her. Her ringlets stuck to her wet face. "What will happen now?"

Isa'ray let out a long breathe. "We must leave. We are going to the east - somewhere. We will find a safe place to live."

The child looked at the tattoo on her arm. "He found us in the woods and saw this," she pointed to the tattoo. "He was trying to hurt me because momma should not have me, right?"

Isa'ray rubbed her pendant. "Yes. But he shouldn't have hurt you or killed your mother."

Sa'tala fiddled with the tassels on the pillows.

Isa'ray sighed. "You need to get dressed so we can leave."

The grass crunched under her feet as she walked towards the woods. She had told her servants that she was taking a long walk. Then she had helped Sa'tala creep out of the house and to the woods, where Isa'ray would now meet her.

The clouds sagged with rain and the sun was a collection of gold embers, glowing low on the horizon. The black knuckles of the trees were gnarled against the sky.

She looked back. The city gleamed, still moist with rain. In the distance, the stream gurgled. Isa'ray shuddered. She fingered the pendant and slowly turned away.

Beth Carlberg is a freelance writer, currently working on her first novel. She primarily writes fantasy and folk horror. You can view more of her work at https://www.wingsandwriting.com. You can also email her at [email protected]

More stories from Beth Carlberg and writers in Humans and other communities.