by Kaylin 4 months ago in literature 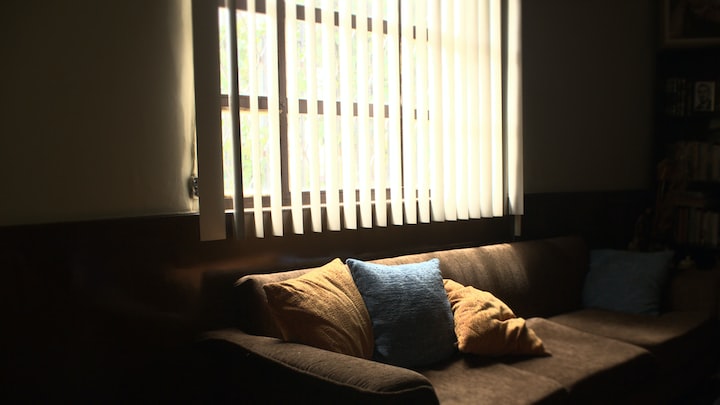 Photo by Jorge Moncayo on Unsplash

Eric’s heart skipped a beat as the keys jingle in the lock, and he tried to quell the pang of excitement he felt whenever Laini came to visit. His friends said that after the first couple visits, he’d regret giving her a key to his apartment, but Eric felt like that wasn’t the case for himself. He didn’t regret it... per se but he did find that now, five months after granting Laini unlimited access to his home, the sound of keys rattling still sent him into a tizzy.

Chill Eric, he told himself. It’s just Lai, you’ve been friends for years, she’s probably just come to eat all your food.

This made sense on paper, but still didn’t stop his heart from galloping when the door creaked open.

“Heeeeere’s Laini!” Laini drawled, smushing her face in the tiny opening she made with the door.

“Does that mean I get to cut your hand off? Like in the movie?” Eric deadpanned from his spot on the couch. Though, he was grinning as he muted the tv and lifted the remote like a mock machete.

“Not by the hair on my chinny chin chin,” Laini growled.

Laini stepped in and closed the door behind her, “You know, you shouldn’t let maniacs into your home - didn’t The Shinning teach you anything?”

“Why? If I didn’t, you’d still huff and puff and blow my house in anyway.”

“Har. Har,” Laini shot back and threw her coat over the couch. She might not be the big bad wolf, but she certainly was a little pig.

Eric put a hand over his mouth, “Oops, did I say that out loud.”

Laini grumbled something about the insensitivity of men as she walked around to the other side of the couch. She made sure to hit Eric with her purse as she settled down. She toed-off her boots and twisted to tuck her feet beneath Eric’s legs.

She shrugged, “What? My piggies were cold.”

He didn’t say what he was thinking, why don’t you just keep your shoes on then? And instead hoped that they could stay in this tableau forever.

“Friday night, as in the weekend is tomorrow.”

“Yes Lai, I am afraid I’m aware of how the weekdays work.”

“Well you could’ve fooled me.”

Eric rolled his eyes. He knew where this was going. He made a point to unmute the tv and turned up the volume.

“You can try to drown me out as much as you’d like, but we both know you’ve watched every single episode of The Office a hundred times,” came Lai’s voice over the show’s intro. “I know because we’ve done this a hundred times as well. Every weekend, it’s ‘Let’s binge this, or ‘have you watched that?’ And Eric, I love you, and I love that you’ve made your place so welcoming for me, but I want do something outside for once.”

And despite his hurt feelings, Eric’s mind locked on what she just let slip.

I love you, he thought. She loved me? Did she mean to say that? Like, Love-love? In that way? Like how Jim loved Pam in ‘The Office’? Not that they were the most aspiring of couples, but they did end up together…

But Eric decided to ponder this on his own time. He couldn’t spiral like this while she was here, and they were having a good time. He didn’t want to shatter their peace. Their equilibrium.

“It’s not like I’m inside all the time,” he said in his defence.

Laini wriggled, and Eric released her feet out from under him. She folded her legs into a pretzel and leaned against one of the throw pillows, she forced him to buy.

She fixed Eric with a look of pure derision, “you literally work from home. Your job is the literal definition of; ‘Inside All the Time’.”

She waved her hand impatiently, “then just let the sunshine on your face.”

“I have windows.” He smiled, knowing he was being annoying but unable to help it.

“What are you? A plant?” She half sneered; half laughed.

“Well sorry to like rain on your indoor picnic and everything -.”

“Wait, then what’s the one about the ants?”

“Why would I care if there were ants at my parade?”

“Well I’d currently care if it rained during my picnic.”

“Especially if it was indoors.” He smirked.

Laini rolled her eyes before her voice took on a surprisingly sober note, “I just don’t want to you overwork yourself. I know the moment I leave; you’re just going to go back to work. And that’ll be like, what, 80hrs this week? Where’s the fun in burning out? What’s it all for at the end of the day?”

There’s was a pause as Eric thought her words over. What’s it all for at the end of the day?

That’s when it clicked.

Erics face suddenly mirrored Lai’s in sincerity. He took a deep breath to calm his nervous and took Laini’s hand in his.

Laini eyes widened as Eric leaned in and said the words he’s been suppressing for the past five months.

Laini’s free hand fluttered to her chest. “You want me to move in?”

she's a work in progress.

See all posts by Kaylin →