by Benny Shlesinger about a year ago in literature
Report Story

For those we love 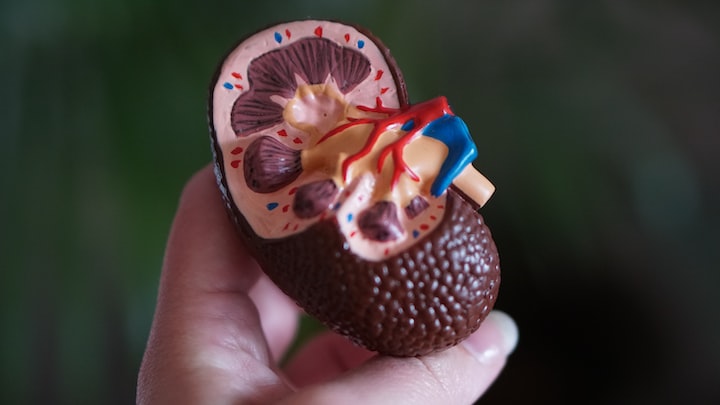 Photo by Robina Weermeijer on Unsplash

Scott splashed through a puddle and looked over his shoulder to see his younger sister shuffling her feet in preparation to jump. He hoisted the small girl onto his shoulders, eliciting gleeful giggles. It took him several strides to cross the recently flooded streets. Autumn leaves packed the runoff drain creating small ponds against the sidewalk.

Scott hopped onto the curb as a car engine rumbled alarmingly close. He set Hallie down and turned to see a young couple driving toward them. There was just enough time to notice the woman’s bright red cap before they passed, crashing into a large street pond in front of Scott and his sister. The wave smacked their faces, leaving them both soaked and shivering.

Scott scooped her up and continued home on squelching shoes. His anger sparked, but was quickly extinguished by the trembling sensation of Hallie sobbing into his shoulder. He bit the inside of his cheek to stifle the emotion, shame at another failure to protect his baby sister.

Scott pushed through the front door and found current guardian Jeremiah sprawled on the couch, red eyes glazed over.

Startled by their entrance, Jeremiah jumped up and chuckled, cheeks reddening.

“I’ve got everything ready for dinner, it’ll just be an hour or so!” He said sheepishly and disappeared into the kitchen.

Scott set Hallie down and his heart cracked watching her frail, dripping body gingerly climb the stairs. Just six months ago, she was hopping up the steep steps by the two.

He followed her up to the bathroom, toweled her off, and helped her change into some clean clothes. “Put your arms up,” he instructed and tugged a shirt down over her head. Her arms squeezed him weakly and he returned the embrace, holding her close.

“Scott!” called Jeremiah from downstairs. “Could you come down and help me?”

Scott kissed his sister on the head and walked into the hall, turning in time to see Hallie heave herself onto the bed and pull a pillow onto her stomach. She took a breath and gave a long, shuddering exhale. She then pulled out a little black book from under the pillow and began doodling. Her eyes were pale, absent their normal sparkling blue.

Scott descended the stairs, taking a moment to dry his eyes on his sleeve before finding Jeremiah in the kitchen.

“Curl your fingers,” said Jeremiah, pointing to the knife and cutting board sitting on the counter.

An hour later, they sat at the dinner table.

Hallie hummed with delight at each spoonful and Jeremiah praised Scott for his assistance in the kitchen, though he’d barely helped. His sister beamed at him with pride and it warmed him to see her happy, to have helped prepare a dish that she so enjoyed.

“Hallie, sweetie, you know what tomorrow is right?” Asked Jeremiah.

Hallie spooned another bite into her mouth and nodded. She swallowed with another hum of pleasure.

“We’re going to the hospital to see the doctor,” she said, surfing her spoon through the soup.

Jeremiah cast his eyes down at the table and Hallie fell silent.

The three finished their meal in silence. Jeremiah looked tiredly at the dishes but shook his head with a smile when Scott guiltily offered to help him clean up.

In their shared room, Scott found Hallie arranging the pillows on his side of the bed.

“What’re you doing?” He asked, settling into the sheets.

Hallie yawned and sank into the large pillows. “You needed more pillows. I gave you some of mine. I only need one.”

Scott pushed the blankets in around Hallie and she snuggled into their shared cocoon. Within a minute she was snoring softly on his chest. Scott stared at the ceiling, holding his sister, forcing away voices in his head whispering fearful thoughts about the looming day.

When morning finally arrived, Jeremiah drove them to the hospital.

They found a parking spot just a short walk away, but Scott insisted on carrying Hallie in. They moved through a crowd of waiting strangers while Jeremiah approached the front desk.

Hallie glanced around and clung to Scott. He found them a pair of vacant seats and she buried her face into his shoulder. He squeezed her for reassurance, but anxiety fluttered in his chest.

He felt Hallie’s small hand in his and gripped it tightly.

The whispers of an argument caught Scott’s ear and he followed the noise to its source. Jeremiah was leaning on the front desk, gesturing with frustration at the receptionist.

Scott stood up and gave his sister’s hand a squeeze. “I’ll be right back, keep my seat safe?”

Hallie nodded and lifted her legs to guard his chair.

Scott forced himself to smile at her, then picked his way to the front.

“That poor girl has suffered enough. She shouldn’t have to bother with this paperwork nonsense,” said Jeremiah as Scott joined him.

Behind the desk, a saggy-eyed receptionist leaned her head on her hand and watched Jeremiah indifferently.

The receptionist moved her eyes to Scott. “I need a parent to give consent for your sister.”

The woman slowly extended a clipboard to him. “Excellent, thank you, sir,” she drawled and picked up her phone. “I’ll check the girl in, just give me one moment.” Jeremiah pulled Scott aside.

“What an awful woman,” said Jeremiah. “You’d think she’d have a bit more sympathy for-.”

Scott turned to find the receptionist sitting upright, the blood draining from her face.

“But she’s here,” she said, panicked eyes flashing at Jeremiah and Scott. She’s in need of immediate care, the operation was scheduled-.” The receptionist raised a hand to her mouth. “I see.” She hung up the phone and lowered her eyes without a word.

“I’m so sorry,” whispered the receptionist. “There was an accident in transport and the donor organ was lost.”

Her mouth kept moving, but Scott couldn’t hear her. He might’ve screamed if the shock hadn’t stunned him into silence.

Jeremiah began furiously arguing with the receptionist. She kept her eyes down and didn’t respond.

Scott was halfway through the crowd before Jeremiah noticed he was gone. He pushed through strangers and clenched his teeth to hold back tears pooling in his eyes. Emotion was boiling up through the cracks.

There had to be something else they could do. The donor was lost? What was he going to tell Hallie? He didn’t want to scare her, let her see that he was swimming in terror.

What would they do?

Scott broke through the crowd and found Hallie wasn’t alone. A young man sat next to her, whispering to her. She was showing him her doodle notebook.

He watched the man turn his head and smile at a young lady sitting several seats over, gently swaying a small rocker occupied by a gurgling baby. She returned his smile.

Scott balled his hands into fists as the memory clicked into place. His swirling storm of emotion surged as his eyes locked on her bright red cap. His eyes shot back to the man whispering to Hallie and Scott yelled in anger, drawing immediate attention of everyone in the room..

Any expression of joy vanished from his sister’s face as he stomped forward, fear replacing it when she noticed his anger.

He broke down to the ground and began sobbing. He’d failed and there was nothing anyone could do about it. He was going to lose his sister.

Every pair of eyes lay on Scott, but nobody said a word. The lobby held a sober silence. A child was weeping in the hospital.

Hallie slid off her chair and put her arms around his body, which was still shivering with unbridled emotion.

Hallie rubbed her hand on his back.

A pair of hands slid under his armpits and lifted him into a chair. His sobbing subsided and he found himself looking through bleary eyes at the same man that had splashed his sister this morning. He wanted to yell, but there was no more anger to spew. He was drained.

Jeremiah burst through the crowd of observers and threw his arms around Scott and Hallie.

Jeremiah looked at her and opened his mouth, but the words died in his throat.

Hallie looked from Scott to Jeremiah, searching their faces.

“What’s going on?” She repeated. Her voice cracked with fear.

Scott looked into Hallie’s gray eyes and cupped her face in his hands.

“Hallie, you need another kidney.” Scott kissed her on the forehead and pulled her into a tight embrace.“I’m giving you one of mine. I only need one.” He looked over her shoulder at Jeremiah. “I’m going to donate one of mine,” he repeated firmly.

Jeremiah didn’t protest. He agreed to sign consent as guardian for Scott.

The two met the receptionist at the front desk again, but she was already shaking her head. Like everyone else, she’d watched the whole scene.

“I’m so sorry, I can’t,” she said. “You need to be screened and prepped and we might not have room for two patients. And the live donor costs would need to be accounted for...” She trailed off.

“You will do the transplant,” said Jeremiah in a low voice. “Or I will sue this place for everything it’s worth and I will make sure you are fired. Do not make me go to war with you, lady.”

“Even if we could find the room,” she stuttered. “The live donor costs-.”

A voice boomed through the room cutting her off.

“Ladies and gentlemen of the lobby!”

Scott turned and found the man from earlier, standing atop a chair next to his wife and baby son. “There are often moments in life where we hear about terrible things and wonder whether we could have done something.” He looked at Scott and his sister.

Scott watched the woman with the red cap dry several tears from her eyes.

“Today you have an opportunity to do something about it,” continued her husband.

He asked for his wife’s cap, dropped in a large wad of bills, and passed it on. Within minutes it was brimming with gifts from strangers in the room. When it returned to him, the man walked it to the front desk.

“Your sister told me about you, Scott,” he said, handing Scott the hat full of cash. “She’s truly lucky to have a loving brother take such good care of her.”

“Thank you,” he whispered.

Within minutes, he and Hallie were following medical staff through large doors. As they went, they were cheered by a crowd of waiting room strangers, Jeremiah shouting encouragement among the voices.

Scott took his sister’s hand and rubbed his thumb over her soft skin. She was breathing nervously.

“Ok,” said Hallie, soothed by her brother’s confidence. She gripped his arm and Scott found himself smiling.

Years later, Scott would remember this moment. He would laugh about it with an adult Hallie, reminiscing about how as the doors swung shut behind them, they had heard Jeremiah gasp.

“Christ,” They’d heard him say. “There’s got to be twenty grand in this hat!”

More stories from Benny Shlesinger and writers in Humans and other communities.