by Koby Sampson 5 months ago in supernatural
Report Story

An occurrence in the high desert 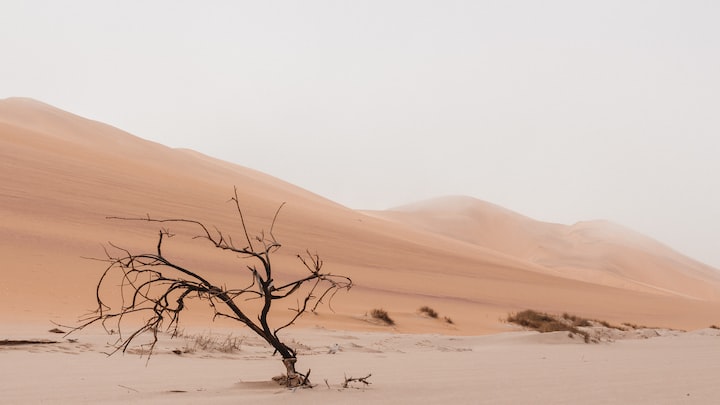 Photo by Ryan Cheng on Unsplash

Dawson and Musgrave guided the horses down to the river bed with their free hands while using the other hand as a shield from the increasingly harsh glare. The hooves clopping through the dust and rocks reverberated through the dry creek bed. They had long left the colorful variety of osha, sage, corn pollen, and bitterroot behind for creosote and junipers that looked old as Moses and were twisted and demented, as if too sensitive for the solitude.

They were well aware of the futility of attempting stealth with these beasts, but it didn’t quite influence their tactics, as hubris had taken the reins for these two old gunfighters. They took the casual belief that any danger that should find them would fall underfoot.

Dawson dreamed of the beer awaiting him at the depot.

Musgrave was five or six years his junior and had previously been in the employ of the Pinkerton Detective Agency. In the roughly day and a half since they had set off from Jerome, Dawson began to suspect that Musgrave had not been recruited by that lot for his capacities for logic and abstraction.

The only thing between them and the sun this day was a flimsy sheet of cirrus streaked just thick enough to obscure the sun but not nearly enough to protect, but rather refract.

Musgrave had been nipping from a flask periodically since yesterday.

Dawson did not know how to ask his partner whether or not he knew of alcohol’s effect on the body’s temperature. He was rather intimidated by him. The last thirty-six hours had been largely silent, periodically punctuated with terse trivialities.

The two old white men, fat and soft, struggled to stay atop their poor branded and degraded steeds as they foolishly stumbled down into the river bed. The sight of them blundering across the pale parched desert floor made Red Creek want to laugh and cry. Screaming Wind remained silent as a breeze, one that would fall upon their pink hides if they dared wander too near.

The pair inched from atop the talon shaped rock and clambered quietly to a more suitable vantage next to an ancient saguaro, Red Creek tracing his finger along his bow, and Screaming Wind his axe. They prepared themselves for the possibility of drawing first blood as they eyed the Brownings and Winchesters glinting in the sun. Undoubtedly they had superior firepower, but against stealth, surprise, and arrows, firearms were only good for noise.

Yet they heeded the precarious relations between the nations, and spilled blood would mean more trouble than that of two wrinkled trespassers.

They decided to continue creeping along the ridge opposite, following their progress and, if they should cross the creek, scare them away in desperate hope of not shedding blood.

Dawson, with a swift icy wave of dread, became aware of someone over the edge of the ridge opposite the creek, registered in the corner of his mind’s eye. His stomach sank with the thought of crossing. He decided not to discharge his weapon but to inch his horse to the right. Dawson was in between Musgrave and the ridge, so he would gradually and quietly lead them away from the gaze of the enemy, follow the river and disappear into the mesquite thicket on their side of the river, where he could alert his dazed partner and formulate a plan of action.

Dawson pulled the reins ever so slightly to the right, guiding them the few necessary degrees that would inconspicuously lead them to the cover, and Musgrave’s horse staying directly parallel, turned as well. Musgrave, leering with heat and drink, accepted the new heading in a trance.

With great relief, the pair sensed that the men were changing their course. Screaming Wind was curious as to whether they had been seen or rather sensed. Old warriors sense more as their eyes and ears fade.

However, they were troubled to see that the men were soon to withdraw from sight. Even if it were away from the border, Red Creek was loath to lose sight of these potential assailants. They would continue their surveillance down past the ridge and ensure that the white men would be on their way to anywhere but here. He and Screaming Wind bounded like cats down the face of the ridge, lightning quick until they were under cover of mesquites, shielded from their gaze. The gunmen did not appear to have noticed them. The scouting party kept parallel to their subjects as far as the underbrush would allow them to remain totally concealed.

Dawson only tightened up as they got nearer to cover, because he had no inkling of what to even plan for once they could plan action. He longed for a twilight of his life rid of the visceral lightning crash of gunpowder. He was not sure if he would use his rifle even if he had to. He thought this terribly selfish considering his party, yet he did not care. Care just as energy was a physical and perishable commodity, and Dawson was nearly out.

They were enfolded by the cool cover of the gnarled mesquites just as Dawson was reeling from excessive thought. There was an opening in the trees not far beyond that led into a sort of narrow opening between rock faces. Dawson unwound as he realized how perfect this cover was. They had the advantage now. They could dismount about fifty feet in and have a sure tactical niche where they could stay until nightfall if needed.

They began the descent into the alcove, and noticed that the rock walls were intermittently lined with various animal bones, almost decoratively. Dawson thought less of this as he was training his ear on the path behind them. They dismounted on his insistence, and Musgrave began collecting kindling for a fire in the case that they would bed down here for the night.

Dawson unsheathed his Winchester and took a perch with an advantageous view of the small forest below. They would be fine.

He wheeled around. His blood froze and his eyes swam.

It was smiling at him.

The natives were just about satisfied with the distance at which they had put their quarry. The timidly turned around as they stood in the middle of the creek bed, when they heard cries that they had never heard from beast nor man. It was all they could do to not turn tail and sprint all the way home. It was a good deal of time before either could muster up the courage to investigate. They ran quietly through the thicket, slowing at the detection of the scent of flesh in the air. They happened upon a mass of flesh of both horse and man scattered about the opening of a cave.

It was carnage of a scale never seen by either. There was no good in whatever did this.

Alerted to a rustling in the branches, they looked up.

It was smiling at them.

I’ve been a writer since I was about eight years old, and am now looking to make the transition to professional writer. If I could get paid to do this, each day would be better than the last.

More stories from Koby Sampson and writers in Horror and other communities.