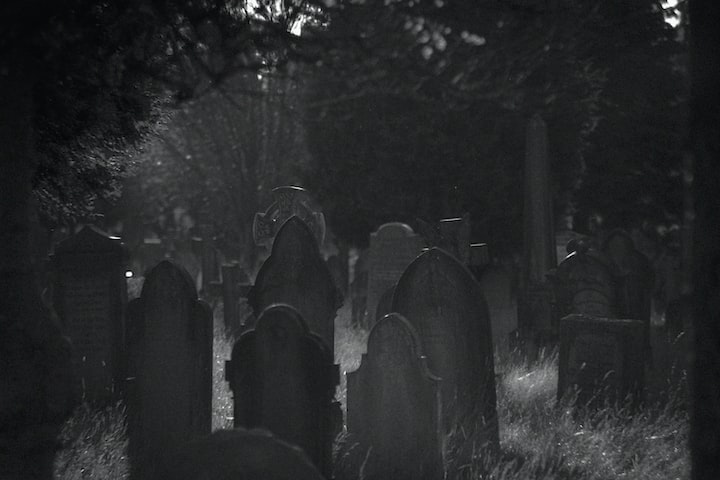 Photo by Maksim ŠiŠlo on Unsplash

Many years ago, there was an old woman who lived in a secluded wood. Rumor had it that this woman was a witch, but honestly no one really knew for sure. She did have a very uncanny sense of intuition, however; if someone lost a head of cattle in the night, the old woman knew who had taken them. If a person had gone missing, she would tell their family exactly where they could be found. No one knew how she knew these things, but she was rarely if ever wrong. She brewed tinctures and poltices as well for the locals, to cure everything from rheumatism to the common cold. The legend was that all she asked in payment for her services was a dollar for herself, and a dime for her blind old coon dog.

As is usually the case, she eventually passed away. Her headstone can still be visited in a small, run-down cemetery on the edge of the town she serviced. Anyone can visit her final resting place, and it is advised that you be respectful of it. Greet her cordially, and even say a prayer over it if you like, but never under any circumstances touch anything or step over her grave.

The people of the younger generation who never knew the old woman scoff at the Old Folks when given these warnings. Still, the town is a highly religious one, and due to their upbringing no one dared to defy the warnings... at first. Everything changed when a new family moved into town. They were from up North, a decent bunch of folks, but not overly religious. They had a teenage boy, about seventeen, whom they enrolled in the local high school. This boy was definitely a bit of an upstart, and seemed to make it his personal mission to challenge every authoritative figure he came across. He started fights at school, routinely talked back to teachers, and even had a few small scrapes with the local law. Despite his problems with authority, he was very outgoing and friendly with his classmates, and it wasn't long before he'd become close friends with a few local boys.

One night, the boy and his friends were hanging out in the woods, just messing around. One of them had swiped a six-pack of beers from their father's stash, which was quickly gone between the four of them. The boy complained that he was bored, and asked if there was anything fun they could do or anywhere to go for a little excitement. Being a city boy, he was disappointed that the small, backwater town he'd moved to was so slow and dull compared to the bustling metropolis he was used to. In an effort to impress the boy, one of his friends brought up the cemetery on the edge of town. The boy was intrigued by the idea, especially when they told him of the witch that was buried there, so he asked them to bring him there.

The local boys eagerly did as they were told, feeling excited by the prospect and more than a little buzzed. The moment they approached the rusted wrought-iron gates of the graveyard, however, they froze. They had never been to the cemetery after dark, as their parents and grandparents had warned them not to. The city boy urged them on though, eager to see the witch's headstone. Not wanting to seem weak in front of him, they eventually complied. When they drew near the gravemarker, the local boys stopped a good five feet from the headstone, and spoke in hushed tones. The minute they'd set foot in the cemetery, the warm summer night felt as bracing cold as winter. The wind blew softly, but there wasn't a sound around them. Normally one could hear crickets or frogs from the nearby pond, but the night air was totally still and silent. The city boy didn't seem to notice or care about the sudden cold and silence, and brazenly stepped right up to the witch's tombstone.

He laughed at the other boys for how scared they looked, and scoffed at the moss-covered stone before him. He boasted that there was no such thing as witches, and that they were idiots for believing what their parents and grandparents had told them. Then, as a final stroke of defiance, he pulled out his pocket knife and chipped off one of the small stone flowers that adorned the top of the grave marker. He showed off the flower with glee, then stuffed his prize into his pocket with a grin. The moment he did, lightning forked across the sky. There wasn't supposed to be a storm that night, but when the wind picked up suddenly, thick black clouds covered up the full moon above them. The three local boys began to quake, and ran out of the cemetery as fast as their legs could carry them. The city boy followed after at his own pace, mocking them for their fear the entire way.

In the days that followed, the city boy began acting strangely. He became withdrawn and anxious overnight, jumping at every noise and quick movement around him. When his friends asked him what was wrong, he would quickly brush them off and change the subject. One week after their visit to the cemetery, the city boy asked his friends to come over and spend the night. Apparently his parents were going out of town for the weekend, and left the house in his care while they were gone. When the local boys arrived at the city boy's house, he seemed much more shaken than usual. He looked like he hadn't slept in days, and constantly fidgeted with something in his pocket. Still, he wouldn't tell them what was wrong no matter how they pressed him for answers.

In an effort to cut the tense atmosphere, one of the boys suggested they put on a movie. The city boy agreed, but as soon as they turned on the TV, the lights began to flicker on and off all over the house. The city boy began to visibly panic, then looked up at the top of the stairs and froze solid. Suddenly he turned and bolted out the front door with a scream, begging and sobbing to be left alone. His friends were alarmed and confused as they ran out after him, trying to stop him before he got to the street... but they were too late. All three were paralyzed in shock and fear as the city boy tripped over the curb, and rolled straight into the oncoming path of a speeding pick-up truck. The sheriff and an abulance were called immediately, but sadly the city boy passed away at the hospital later from his grievous injuries. The sheriff interviewed the local boys at the police station to ask what had happened, and they told him honestly what they had witnessed. The sheriff mentioned that the driver of the pick-up had seen an old woman disappear into the woods after the accident, but none of the boys had seen her nor had any idea who she was.

The sheriff then set something on the table in front of them, and asked if they had seen it before. All three boys stared in horror at the object: it was the stone flower the city boy had chipped off the witch's tombstone, covered in blood. The sheriff told them that the city boy had been holding the flower when he was hit, and that the mortician had to pry it out of his hand after he'd died. Shaking with fear and guilt, the boys admitted to the sheriff what had happened in the cemetery and apologized over and over. The sheriff didn't say a word, but carefully cleaned the stone flower and escorted them to his squad car right away. He drove them to the cemetery and led them back to the witch's tombstone, taking his hat off and bowing his head respectively as he approached it. After muttering a quick prayer, he had the boys put the small stone flower back and apologize out loud for disturbing the witch's resting place. Too afraid to say no, the boys did as they were told. The next morning, the sheriff brought the local pastor out to say a special prayer over the grave, just to ensure that the witch was at rest once more.

In the years that have since gone by, there have been others that dared to disturb the witch's resting place. Sometimes they'll chip off a souvenir for themselves from the headstone, but within a week the stone fragments are usually returned one way or another. There are precious few still living today who knew the witch personally, but her legend lives on... as does the legend of the curse. You see, all who have taken a piece from her headstone have suffered incredibly bad luck. Some, like the city boy, have even perished due to mysterious circumstances. Many people today do not even say her name aloud, for it is rumored that doing so also brings bad luck.

The story you have just read is mostly a work of fiction, but the witch was very real, as is her curse. Her name I will not say here, for the reasons I have stated. If, however, you happen upon a little old, run-down cemetery in a place called Heard County, Georgia, please tread lightly. You might just come across the final resting place of this very real, very remarkable woman... and if by chance you do, by all means, stop and say hello. Just remember to speak to her with respect, and don't take anything with you when you leave. If you do, she will know... and you will be sorry.

Welcome, Travelers! Allow me to introduce you to a compelling world of Magick and Mystery. My stories are not for the faint of heart, but should you deign to read them I hope you will find them entertaining and intriguing to say the least.

More stories from Natalie Gray and writers in Horror and other communities.