by Jessica Jeter 2 months ago in supernatural
Report Story 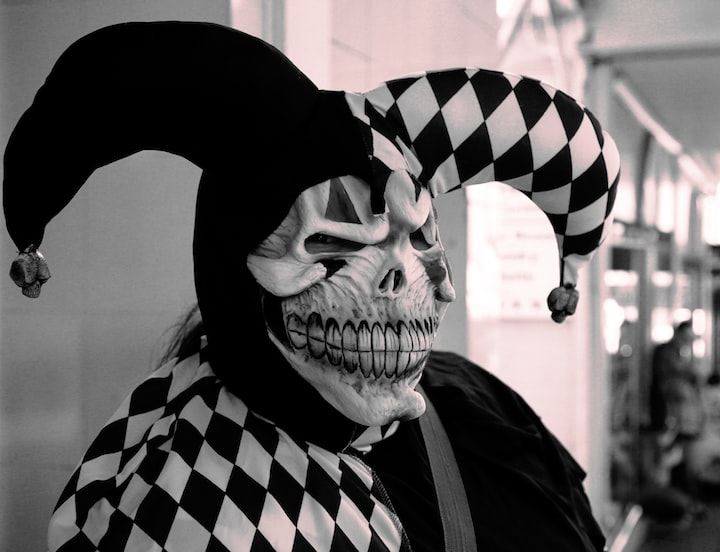 The cabin in the woods was abandoned for years, but one night, a candle burned in the window. Every town has that one house that the town scares the little kids about, in my town that was the old Bennett cabin. The cabin was covered in vines, as if the Earth was slowly carrying its evil back down to Hell. The windows black with mold so as my friends and I was walking down the road on Halloween night the only thing we could see was the light from that candle, as if it was a lighthouse and we the ships coming in from the sea. I don't even know how we got to the steps the last thing I remembered was being at the road, " How did we get here" I said to my friends, we all stopped for a second trying to figure it out and as if the cabin knew its prey was about to flee the door opened.

The first thing I noticed was the smell I haven't smelled that smell since my grandmother died the year before and to a seventeen-year-old kid who loved her grandmother more than life I suddenly stopped in my tracks. One by one each of my friends slowly stopped and turned around as if waiting for that person in each of our memories to appear. Something though just didn't feel right, all of a sudden, I got queasy, and it wasn't from the beer I had been drinking that night. I fell to my knees and Ryan my boyfriend grabbed me by the arm asking me if I was O.K. I guess before I go any farther let me tell you who all that night was there. Ryan and I was out with Denise, my best friend since kindergarten, and her boyfriend Tim, who happened to be Ryan's best friend. This was going to be our last Halloween together since I was going to college and Ryan had just enlisted into the Army. We had decided we were going to go trick or treating like we used to as kids and see who puked first from beer covered chocolates. We wanted to make our last holiday together memorable, and that it was just not how we had expected.

Now where was I, ah yes, Ryan grabbing me. I looked up as I felt his fingers lock around my arm to see Denise and Tim already walking up the steps to the doorway. Before I could say stop, I heard my best friend screams out in terror. I jump up and run up the steps pulling Ryan behind me the door slams behind us, as I turn around, I realize what was once a door is now just a bloody pit. I look around to Denise frantically trying to climb out of this pit and I finally figure out why she's screaming. These things scaled blackened skin like soot, a cross between a human and a black mamba are tearing apart something unrecognizable now, their teeth having fangs and human teeth is something I would think came out of a laboratory. Is that what this is a secret lab maybe, but before I could get the words out Ryan pulled me over to Denise because these things finally quit playing with their piece of meat and start staring at us. We look and see what Denise had been digging at, a root, and she had unearthed just enough to give us enough leverage to climb up and out, Ryan cutting it off so the Snakemen couldn't follow. 'We're definitely not in Kansas," I said as I looked around what looked to be some sort of jungle.

"Denise, where is Tim," Ryan said and we both looked at each other as she pointed back into the pit, realizing that the piece of meat those things were tearing to shreds was once our friend, and knowing that his sacrifice is the only reason we were able to make it out of that pit alive. "He saved my life," Denise kept repeating rocking back and forth I had to slap her to bring her back to reality because we didn't have much time to start running from the sound coming out of the tree line, we weren't alone, and I don't mean the pit Snakemen. I heard the growls from the tree line before I saw the bloodred cat eyes peering out at us. "Fucking Run", I screamed out as I was pulling Denise up. I was not going to be eaten alive by some laboratory rejected five-foot cats running like men. Ryan was behind us throwing everything he could hastily grab as we all ran for our lives, just then we saw what looked like seven monoliths positioned in a circle, why did we have to run to it that's one thing I will never be able to forgive myself for.

I remember the bright light as soon as I stepped between two of the monoliths and then darkness, not darkness like a cloudy night but the darkness that is what nightmares are made of, and all I could think is please let me find Ryan and Denise. It was at that time that I heard Denise whimpering like the darkness read my mind and gave me back my friends thank God I know Denise is here but what about Ryan? I yelled out for Ryan and reached down to hold on to Denise and as I grabbed her arm, she just went limp. "You got to get up, we got to find Ryan and figure out how to get home," I said all Denise could do is whimper o.k. I knew she was in shock, but I wasn't going to die in this darkness, and I definitely wasn't going to leave Ryan here. We walked a few feet and then like on cue I heard familiar breathing and I called out while reaching for Ryan and he answered back but before we could find each other carnival music started to play in every direction. "No, no, no not this," I screamed as I started to feel my knees buckle under me but not before I seen him.

I don't know what you call them, but I know what they do, or at least what they did to my parents the last night I ever seen them. I was six and my first time ever going to a carnival, and it would be my last, (watching your parents brutally beaten to death kind of does that to a person). We all rode the Farris Wheel and going on people all around but by the time we got off no one was around. We head out and as we are walking my dad noticed these eerily looking clowns following us, we walk faster and so do more and more clowns. The closer they get to us they start smiling, their mouths getting wider and wider, their makeup looking more and more weathered and worn blood trickling down their fingers. I was so scared and while I watched these bloodthirsty clowns first kill and rip apart my father and then my mother, I knew I was next, so I closed my crying little eyes and when I opened them up the carnival was gone and after years of therapy, I believed an animal attack was what killed my parents till now.

I snapped back just in time to see the twinkling lights and in the darkness the teeth, omg the teeth, wider and wider the closer they walked into the light. Ryan pulled Denise and I behind him to try to protect us as we keep backing up, but more and more smiles start getting wider and wider all around us in the darkness. Suddenly, as we are surrounded, the only fully formed clown speaks in a voice between Bozo and John Travolta "Hiya kiddo eleven years since you needed us, we really need to quit meeting like this," as he starts laughing. "What No I don't need you I never needed you leave me alone," I said crying," You ruined my life!". The clown looks at me his smile slowly getting smaller turning into a frown says," You really don't remember the wish, do you?". "Wish, what wish?", I screamed, my mind racing so many things from my parents to the three with me tonight. How could hurting the only people I love be my wish, but I got snapped back into reality as the clown spoke. "Reddie,Reddie,Reddie think back the night before the carnival? Oh yes, I see your eyes you are finally really remembering aren't you," His eyes burning holes into my soul as he knew I finally knew. I remembered what my father did that night drunken coming into my room after beating my mom. Oh yes, I remember my bedroom door squeak open by my mother as she saw and just shut me back into the darkness again. That darkness was when I first met Bingo the clown, he stood in the darkness that night and asked if I wanted him to make it stop that was the night, I asked to make sure i never got hurt again. "But why am I here again?", I asked. Bingo said, "Kiddo we see everything in the darkness, and we know what these so-called friends had planned for you tonight, what was it Ryan kill her and then pretend she got kidnapped for her inheritance that sounds about right isn't it?". I looked at Denise and Ryan "why I loved you, I loved you both", I said. Before either could say a word, the clowns pounced their bloodlust only quenched by the last breath of evil that was Ryan and Denise, I kept my eyes closed through it all again and again when I opened them, I was back at the cabin. The police said I was given some bad LSD and Ryan, Denise, and Tim were just three more lost in the forest and I moved on.

" Well guys what do you think?", I asked my fiancé and his little sister as I put another log on the fire. "Whatever, I don't believe it so you have a blood thirsty clown guardian angel hell bent on making sure whoever hurt you get punished I call Bull!" my fiancé said. Just then a sound of carnival music could be heard in the air as I said, "Hey did I tell you I know you both are lying about being brother and sister".

More stories from Jessica Jeter and writers in Horror and other communities.