Not All Doors Should Be Opened 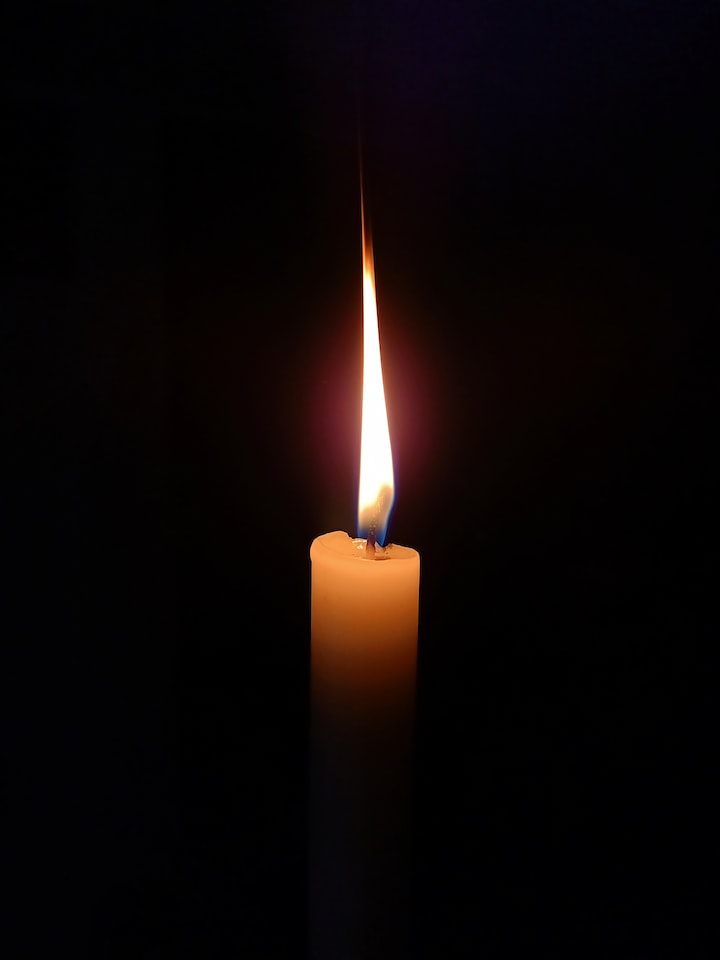 Photo by Marc Ignacio on Unsplash

Abigail stared at the words followed by a taunting blink of the cursor on her laptop screen. It had been five years since her therapist had told her to try writing her nightmares down. Never one to do something without purpose she turned those raving scribbles into novels and much to her surprise they had been successful. The monsters that had haunted her nights had now become her livelihood.

It helped too. Every time her fingers danced across the keyboard and transferred them into words, the dreams would stop. All but one, the cabin. For as long as she could remember she dreamed of the desolate building nestled deep in an unknown wood. It seemed to stare at her with its two windows, like empty soulless eyes. Then last night it changed. There was a light in the window, a candle, with a strangely warm glow. It felt inviting and a part of her longed to get closer but she would wake up in a sweat before she could reach it.

With a heavy sigh she closed the laptop and pinched the bridge of her nose. She pulled her prescription out of her desk drawer and rolled the bottle in her hands listening to the rattle of the pills inside. The doctor had prescribed them to help her sleep, promising that they’d knock her out without dreams but it had only trapped her inside them instead. Unable to wake under the effect of the drug. She tossed it up in the air, feeling its weight as it landed back in her hands and stared at her closed laptop. If she could just put the cabin into words it would go away like the others and maybe she could really rest for once. The trouble was she had no idea why the dilapidated building scared her so, but now that the dream had changed, maybe she could finally make it inside. Having made up her mind she dropped two pills into her hand and clutched them in her fist. Abigail decided, one way or another she was going to finish the dream.

After downing the pills and chasing them with a glass of water she moved to her room and settled under her comforter. Her hand hesitated at the lamp by her bedside, tempted to leave it on but she wanted the nightmare this time. Darkness filled the room and she closed her eyes hoping the medicine would kick in quickly.

The woods were silent with only the sound of her own footsteps as she crashed through the thick underbrush. It clawed and pricked at her skin and even though she knew this was a dream she felt every scratch. By the time she reached the clearing blood was trickling from her cheek and all the tiny tears in her flesh. She didn’t have time to wonder why she was feeling the pain she only needed to get inside. To the light that was waiting.

With trembling legs she forced herself forward. Each step brought her closer than she had ever gotten. Her hands trailed along the old wooden railing as she stepped on the first stair that nearly buckled under her. At last she put her hand on the old brass knob and threw it open, the old hinges screaming in protest. Her heart thudded in her chest as she crossed the threshold into the dimly lit interior. The candle from the window flickered out from the sudden gust of air and left her in the darkness.

“Hello?” she called, as she looked around the room. There was a couch along the wall with rotting cushions and a kitchen table on the other side with heavy white cobwebs hanging from its edges. Toys littered the floor. A broken baby doll. A stuffed wolf. A zombie action figure? She picked the last one up. They reminded her of the last three novels she had written. Just . . . smaller.

“Abigail”, a small voice whispered. “Abigail. You left me here. How could you?” It was a child's voice that was getting louder and louder. “How could you! How dare you!” The screams seemed to come from all directions pushing against her like a physical force.

“Who are you? Where are you?” Abigail shouted and fell to her knees covering her ears. When it stopped she looked around, her ears still ringing.

“You know who I am.” A little girl appeared in front of her in a long white dress tied at the middle with a red ribbon, her face covered in shadow. Abigail screamed and fell backwards inching away from the girl who slowly creeped towards her. Her back hit the door frame and the little girl dropped to her knees. “You left me here. In the corner of your mind. To rot.”

“There, there, calm down, remember what mommy always says. Count to three. Let them be. One, two, three. You’ll be free.”

A memory came to her then. Of her mother holding her back while she kicked and screamed. Another child on the playground, laying in front of her crying and bleeding from the nose.

“Mommy took us to the doctor.”

“I used to get so mad,” Abigail said. “I hurt Alfie.” The image of her brother at the bottom of the stairs, leg bent backwards and screaming, burned to the front of her mind. She looked down at her hands remembering how she’d pushed him and laughed as he’d rolled down them.

“He took our bunny,” the little girl said and pouted.

“They were going to lock us away. So the doctor made you lock me away. You locked me in this cabin. You shouldn't have done that. I’ve been sooooo lonely Abigail. I had to make friends to keep me company.”

The toys from behind them grew into the creatures from her nightmares. The monsters she’d written about in her books. Alive and looking at her with rabid hunger.

“You wouldn’t come to find me though. Even when my friends played with you and chased you here. Who knew all it would take was a candle?” The little girl threw her head back and giggled. “Did the light make you feel safe Abigail?”

“I need to wake up. Wake up!” She screamed at herself. Slapping her cheeks and pinching her arms. “Wake up dammit!”

“Oh no, you wanted to finish the dream, remember?”

She remembered the pills. She’d taken two just to make sure she’d stay asleep. Abigail got up to run but the girl grabbed her ankle with an unnatural strength making her fall forward, knocking her chin into the dirty wooden floor.

“NO!” The girl screamed and the cabin trembled as if it too feared the pure wrath pouring from the child in front of her. No, not a child, rage. All the uncontrollable rage she’d suppressed. The rage she’d blocked from her memories and stored in a cabin in the back of her mind because her eight year old self had loved Lincoln logs and it seemed more fun than a locked box.

“It’s MY turn now! Hold her here!” The little girl commanded and the creatures moved towards Abigail as she tried to scramble to her feet. Claws from a wolf-like beast tore into her back and held her down. A doll with a missing eye and permanent smile giggled as she slammed a kitchen knife down through her hand pinning it to the floor. Abigail screamed in pain. A ghoul with red glowing eyes staggered toward her, drool dripping from his fangs. It reached its gray thin fingers towards her, grasping her other wrist and pulling it to its mouth to take a bite out of her forearm. “Wake up!” Abigail begged herself in between screams and sobs. “Please wake up.”

“Don’t worry. They’ll go away when we wake. It is just a dream after all. You won’t be going anywhere though and they’ll be back. Night after night after night.” The little girl said as she opened the cabin door. “I wouldn’t want you to be lonely.” She stepped outside and closed the door behind her, leaving Abigail screaming on the floor as the monsters slashed and devoured her.

Abby woke up in bed and stretched her arms over her head. She got up and walked to the dresser to see herself in the mirror. “Not bad”, she said out loud. A barely audible scream rang out in her head and she watched her new reflection frown.

“Let me out!” Abigail screamed and banged on the cabin door.

Abby closed her eyes. “Count to three. Let them be. One, two, three. You’ll be free.” After a few deep breaths, the screams quieted and she smiled once more. “I’m free. Enjoy it in there Abigail. Have a nice vacation and stay out of my way. I’ve got soooo many things to do.”

More stories from Leigh Ann Tuttle and writers in Horror and other communities.