A Door in my Nonna's House

There’s a door in my grandmother’s house that nobody ever opens. 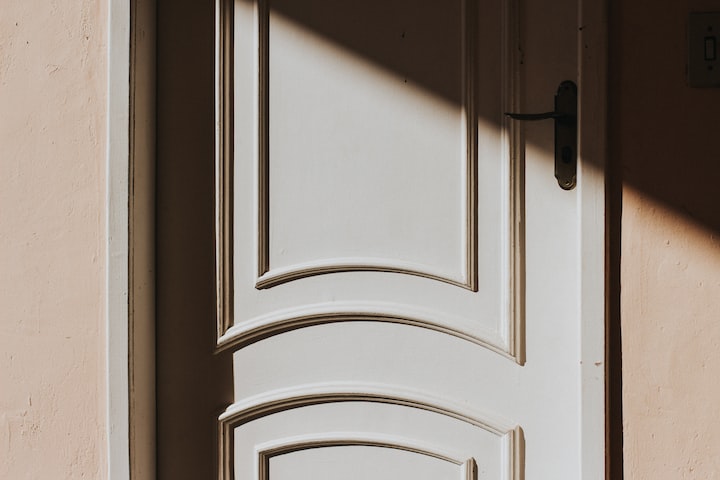 Photo by Jorge Flores on Unsplash

There’s a door in my Nonna’s house that nobody ever opens. “Sewing room,” my grandmother always told me, but the sewing room, piled with fabric scraps and cookie tins of buttons and needles, is the door on the left of that door. “Linen closet,” my mother said, and she grew up in that house, but the linen closet is the door on the right. I haven’t tried to open it. “It would be wrong,” I tell myself, but that’s not why. When I pass that door in the dark, slightly shorter, slightly more narrow, a slightly darker shade of off-white than its siblings, I skirt far around it to run to my bed and sweep the covers over my head. “Base,” I think, panting. “Base, base, base.” Nothing can get me.

Now that I am an adult, I can think about these things more clearly. The door doesn’t have enough room, between the sewing room and the linen closet, to be anything other than another closet–perhaps for the water heater. So I put my ear against it, brow slick with sweat, and listened to the sounds that came from beyond–a steady rocking like a rocking chair on hardwood, though everywhere in the house is carpet. A flapping fluttering like drapes before an open window. A scratching, scratching, scratching. Rats, maybe. But it was not rats, it was the scratch of a pen over dry paper, endlessly scratching and scratching.

That scratching stuck in my head like a popcorn kernel between my teeth, and kept me up at night. My grandmother never slept much–she was always up when I woke in the night to get a cup of water, sewing or cleaning at all hours. Now I wonder if I don’t understand why, because that endless scratching kept sleep off of my mind like a drop of water skittering on a hot pan.

My grandmother and mother are both shortly dead. My Nonna was 120. My mother was 97. I am 65. The old house is now mine. They never saw the door at the end of the hall. Now, sunlight slanting through the bedroom window, I blink and rise with the birds, no sleep to shake out of my bones.

There is a paper on the floor in front of the door, as if slipped out from beneath. I did not want to read it, but my hand wanted to grab. My stomach wanted to know. So I stooped and plucked it between thumb and forefinger as if picking a dead rat up by its tail.

When the black minivan ploughed into the drably dressed woman, camouflaged in the rain, I thought that I might die of a heart attack, but I didn’t. I was alive, because of my red raincoat.

“Stay inside. Bad storm,” The note read the next morning. I still had not slept more than 30 minutes, but I felt mostly fresh.

Later that afternoon, the mailman was struck by lightning.

“Avoid dairy. It upsets your stomach,” I read the next day, the night spent cleaning and watching the television. It was funny, my Nonna always told me the same thing. But she always warned me away from it because it made me bloat, not because the dairy might issue a recall for rat poison in their product.

Now I am 102. My niece runs through the house, bouncing a red ball off of the walls. I have not slept for 37 years, though I feel mostly fresh. I feel alive. I am alive. When I close my eyes, I hear the scratch scratch scratching, but I am alive. When my niece was born, the note from under the door read a second note below the first. I was still holding the baby photo in my left hand. The note read: “Never tell her,” and I felt the admonition in my very guts, twisting my body and my mind into a new shape that could never disobey.

I am tired, though. I am very tired. I feel thin, sort of stretched, like butter scraped over too much bread, and, if only that scratching would stop, I could nap. My hand trembles on the doorknob, disobeying an unspoken admonition that said “never open the door.” I do not know if it was an admonition from within or without, but I almost could not do it. I drew a deep breath and turned the knob. I was not locked. It did not stick.

Seconds later, when the door swung open, I thought I might be standing in front of a mirror. A man stood before me, on a hardwood floor, in front of an open window that looked out over black nothingness, a rocking chair in the center of the room. He looked about 102, and so very tired. He stepped past me, smiled, and closed his eyes, grateful, and it wasn’t until then that I found myself standing in the room, watching him as his body crumpled, lifeless, to the ground in the hall. There was a paper and pen in my hand, and the rocking chair rocked without any occupant. The door closed, and the lock clicked, and now I write, and I write, and I write, waiting for the time to come when somebody, perhaps my niece, aged 80, 90, 140, opens the door to relieve me of my duty.

I was born in Santa Cruz, California, but have lived in Tennessee for over half of my life. I have been writing for a long time, and can only hope to get better! I attend the University of Tennessee for history and secondary education.

More stories from Patrick Juhl and writers in Horror and other communities.