The 12 Best Marvel Comics of All Time

by Nathaniel Channing III 11 months ago in comics

Although there are thousands of Marvel comics out there, we can all agree that some can simply be considered the best Marvel comics in history.

So many comics to read, so little time! When the first publication of Marvel's famous superhero comics were released in October of 1939 under Timely Comics (before the 1960s name change to Marvel Comics), you'd be smart to bet that this helped feed the increasing demand for quality comics.

Now, with over 8,000 characters; dozens of movie-, comic-, and TV-based universes; and 32,000 comics, Marvel still remains number one on the list of the top comic book publishers and companies, towering above its rival, DC Comics.

While, in the 21st century, the interest in and demand for printed comics has changed, there is still a massive audience of fans who enjoy these graphic stories.

In fact, many still love to collect old comics, or even trade them. Others, however, might like to indulge in a modern story arc, instead. Regardless, there are enough comics to go around for everyone of all interests!

Even with the newer superhero comics out there, the best Marvel comics of all time will always stay near and dear to our heart, not just for their increasing monetary value, but for their incredible graphics, first-time character introductions, and remarkable storylines. 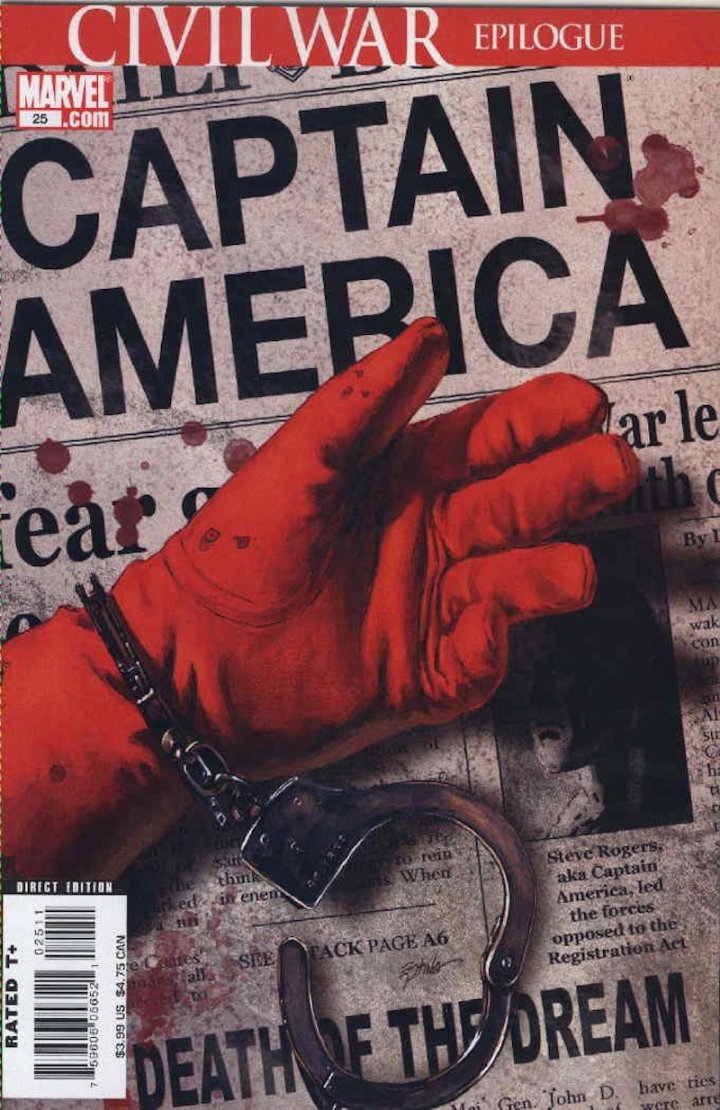 Marvel comic strip superhero Captain America certainly stands out from the other Avengers. His integrity and top-notch leadership skills allow him to put the "super" in superhero.

In Captain America #25A, we witness the first of 18 issues featuring the hero's death, when Red Skull has Captain assassinated after the Civil War. However, it is only Captain who dies, not Steve Rogers, the man behind the mask. The series is titled accordingly: The Death of Captain America. 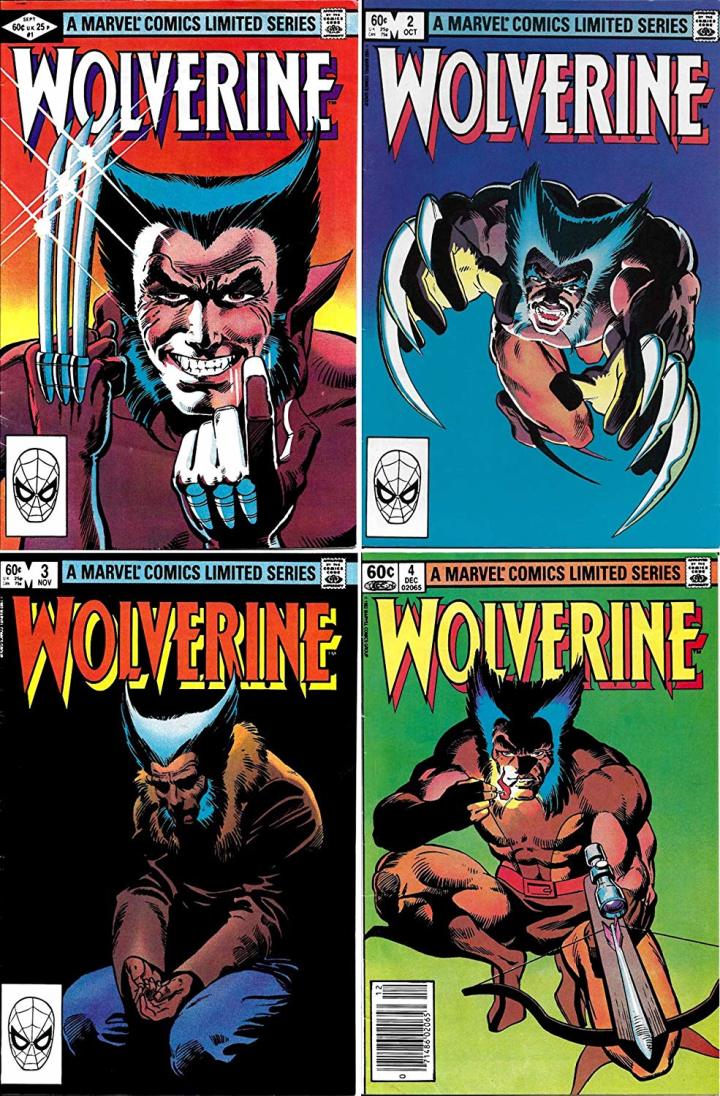 Wolverine #1-4 by award-winning comic book writer Chris Claremont and Frank Miller features Wolverine setting off to Japan on his own to find his lost love, Yukio, only to be defeated by Mariko Yashido during the process.

This four-issue miniseries essentially helped better identify Wolverine outside of the X-Men. From the incredible penciling in the second comic of the miniseries to Claremont's spectacular narration of the plot, neither giving away too much nor too little information, Wolverine (1982) will absolutely have you believing that comic books are literature.

Can we just take a second to show our appreciation for the cover of Amazing Spider-Man #700? It features hundreds of characters that make up what we see from afar: Spidey's eye. Apart from the cover, the storyline of this final Amazing Spider-Man issue leaves Marvel fans stunned.

Readers are intrigued to learn how Marvel kills off Peter Parker while leaving Spider-Man alive in #700. However, Marvel fans will warn you: You will either love or hate the ending of this issue. Regardless of the opinions and emotions it provokes, the character's death is a classic.

Marvel Comics' first issue of Secret Wars features many of Marvel fans' favorite characters, including Spider-Man, Hulk, Captain America, and others in its 12-issue limited series. Cover artist Michael Zeck does an excellent job in depicting the personalities of each character on the cover.

In the first of the series, Earth's superheroes are taken into space where they come across a handful of villains. The war against good and evil in this comic keeps things climatic. Best of all, in this issue, we witness the first appearance of the Beyonder.

In the ninth publication of The Uncanny X-Men's: Dawn of Mutants, Stan Lee and Jack Kirby create a fresh start for comic lovers. Kirby and Lee created new characters in "Mutants," and the first-ever storyline featuring the meeting and battle between the X-Men and the Avengers; debunking a popularly held comic book myth people always thought was true, that the X-Men were an original concept.

Apart from showcasing the moment the X-Men and the Avengers meet face-to-face for the first time, issue number nine of Dawn of the Mutants also features the first appearance of Lucifer, who's powers of telepathy and ionic manipulation make for a challenging foe to face off against.

The Avengers story arc in The Kree-Skrull War, by Roy Thomas, is an iconic Marvel storyline that, later, greatly impacted the Marvel Cinematic Universe in its 2019 movie, Captain Marvel.

In this eight-issue story, the Avengers and Planet Earth are in danger. The Avengers must fight against the Kree (human aliens) and the Skrulls (shape-shifting aliens) in an intergalactic battle. Teaming up with the Krees, the shape-shifting Skrulls make it hard to know who the enemy real enemy actually is. 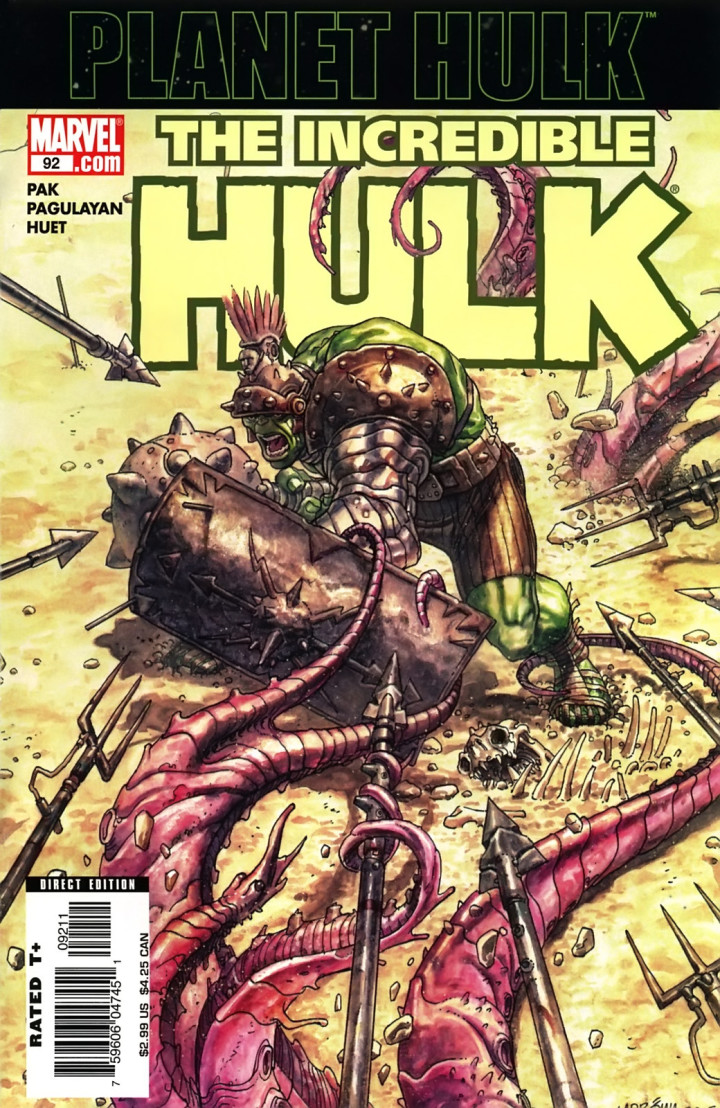 Incredible Hulk #92 is certainly one of the best Marvel comics of all time, graphic- and storyline-wise. In this issue, the Hulk receives a harsh lesson. After he lashes out, those on Planet Earth feel threatened. Thus, for their safety, they send the Hulk into space in an attempt to preserve themselves from any harm this dangerous being can cause.

This issue helps shed light on who the true Hulk is. To some readers' surprise, this Marvel character isn't just the over-powered jerk they might be inclined to think he is; and to top it off, Marvel fans don't have to know a lot about the Hulk before reading this issue for it to make sense. 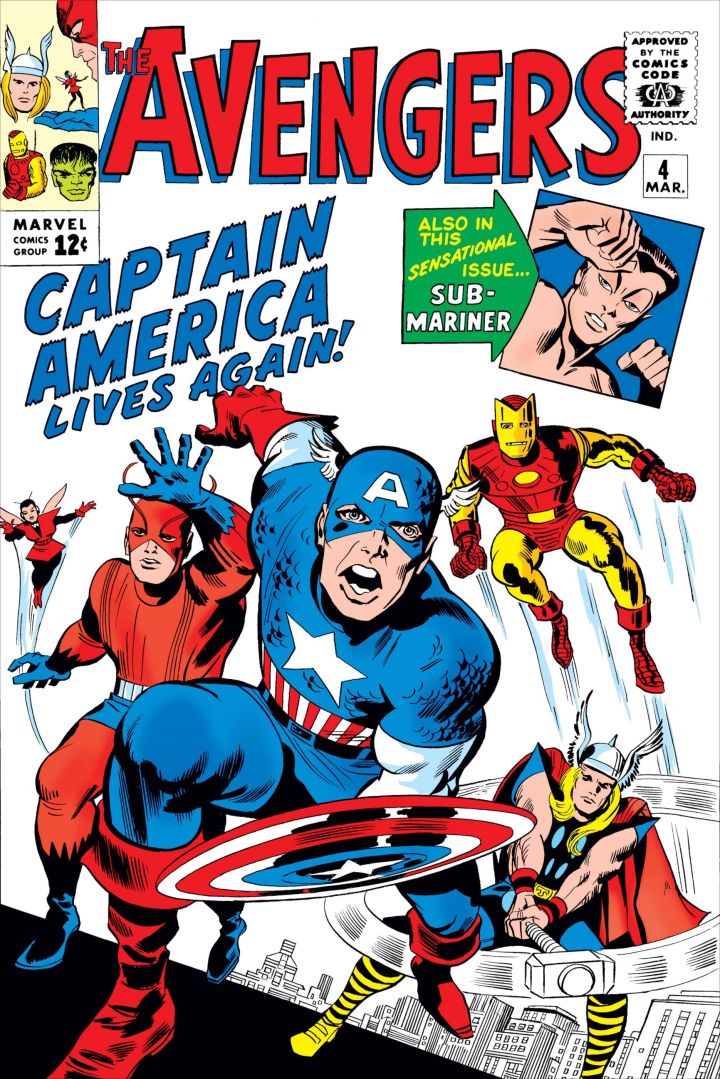 Things get chaotic in the Avenger's fourth comic book issue when Thor, Bruce Banner, Captain America, and Black Widow attempt to bring back Tony Stark and Pepper Potts so they can engage in a battle with wicked demigod, Thanos, for destroying the earth and universe.

For those who want to see Avengers #4 in live action, be sure to keep your eyes peeled for Marvel Cinematic Universe's release of Avengers: Endgame.

In the 285th issue of Fantastic Four, there are many unique and first-time character appearances. Specifically, we meet the characters Cooley, Campbell, and Don for the first time in this issue.

This Fantastic Four comic is special considering this is where Johnny realizes that he no longer wants to give up being the Human Torch. He comes to this realization when 13-year-old Tommy purposely lights himself on fire to honor his favor superhero. 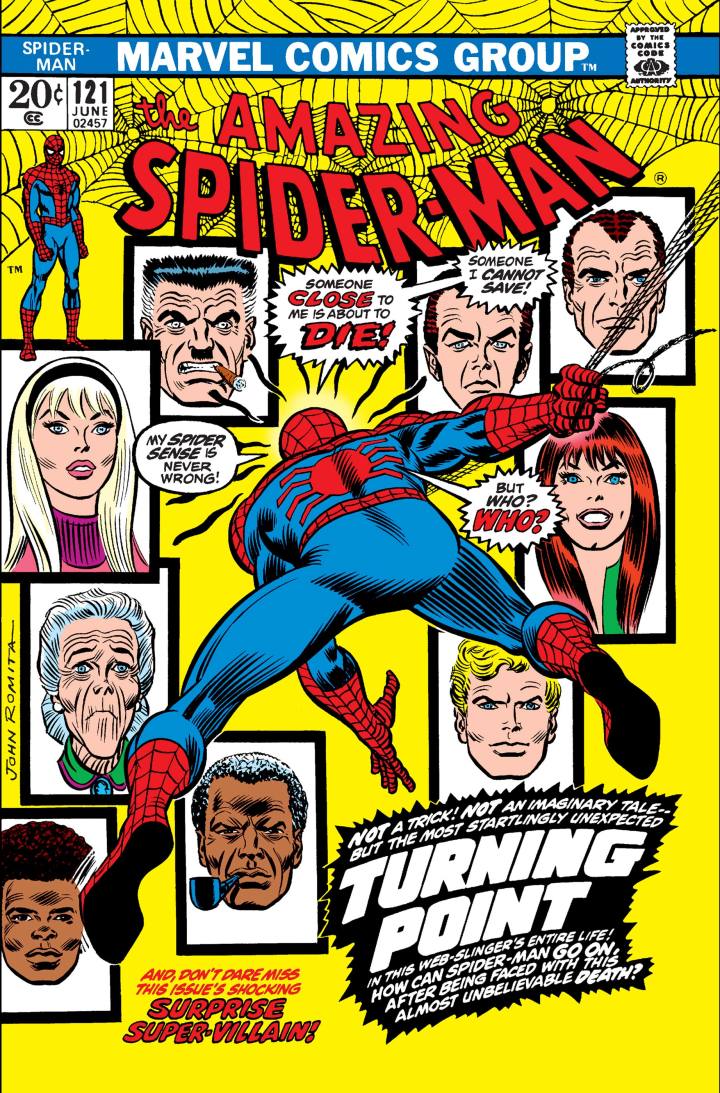 As you might recall, Amazing Spider-Man #121 was the comic where Gwen Stacy, Peter Parker's love interest, dies. For Marvel fans, this comic is clearly a big deal. While Gwen does not die in all Marvel universes, needless to say, her death in that comic book is a genuine shock.

Meanwhile, fans of Mary Jane, Spider Man's main love interest, might have rejoiced after reading this comic. Regardless of readers' varying reactions, one thing is for sure: Amazing Spider-Man #121 included the first comic death that fans never saw coming. It was truly one of many comic book series that broke the superhero mold. 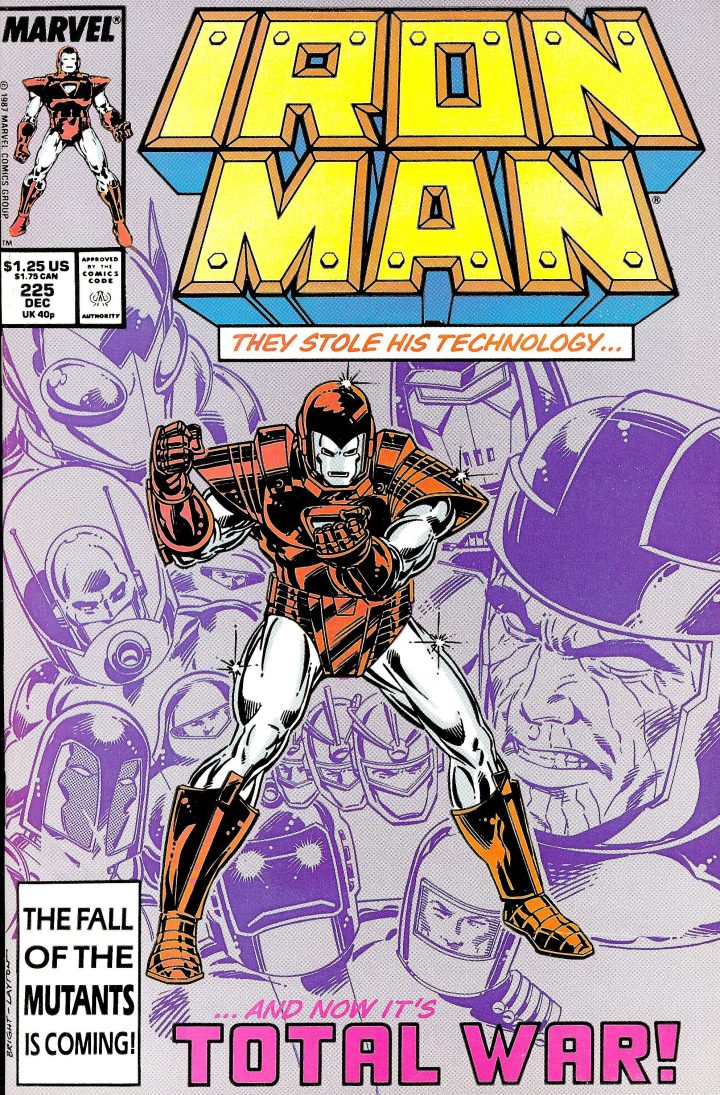 In David Michelinie and Bob Layton's series, Armor Wars, Tony Stark gets inventive as he seeks to create technology that will benefit humanity. Stark ends up creating his Iron Man armor that will enhance his strength, and thus, greatly aid him in battle.

Unfortunately, Tony Stark fails to patent his technology. As a result, villains get ahold of it. Regardless, Stark must continue using his technology to find a way to defeat his enemies who have robbed him of his "secretive" technological invention.

Days of Future Past #141 and #142 are a part of Marvel's comic, The Uncanny X-Men, which takes place in the future (of 2013) where mutants are imprisoned in internment camps. At this rate, only the X-Men can save humanity.

While some might find this title overrated, this Marvel comic marks the first appearance of Alpha Flight, as well as the return of Wendigo. It was also turned into a movie in 2014, solidifying it as one of the best Marvel comics written into existence. It is, however, important to note, that the movie and the comic have their fair share of differences.

The movie buff that can tell you about the latest releases, especially in the sci-fi and comic/superhero world.