by Isaac Shapiro 4 months ago in superheroes

The greatest pillar holding up the entire series of My Hero Academia is All Might. He’s the classic superhero archetype. Basically imagine Superman filtered through the lens of shonen manga and you have All Might, and I think a great part of the series's core appeal lies with him, and how he’s the Superman archetype done right.

Now don’t get me wrong; I don’t hate Superman. But he is a very difficult character for most writers to work with. For years, people have accused Superman of being boring, saying he’s just too good and too perfect, and because of this, he’s the least interesting character in the DC Universe.

He’s not as cool as someone like Batman, who’s dark and brooding. The laziest tactic that most creators have used in some of his modern incarnations is to try and make him a brooding, edgy mass murderer who snaps villains' necks, slams warlords into concrete, or literally rips the Joker’s heart out. 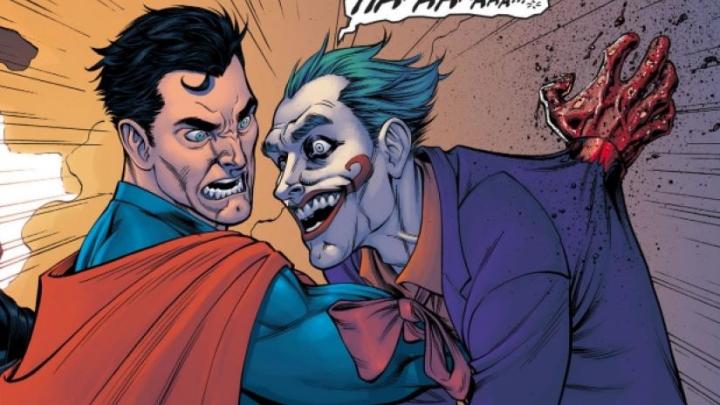 Earnest sincerity is perhaps the most difficult thing to sell in our post-modern cultural landscape, seeing how empathy and sincerity are often accused as being no better than just superficial cheesy schmaltz.

That’s not to say there haven’t been great Superman stories. Writers like Alan Moore, Grant Morison, and Max Landis have all found different takes on Superman, and have made some of the best comics featuring the character. But that brings me back to All Might, and what makes him such a wonderful inversion of the archetype that the public has largely thumbed their noses at.

Now, if All Might was just the all-powerful, super strong demigod, beating up the downtrodden villains of the world of My Hero Academia, he wouldn’t be as good of a character as he is. No, the secret sauce to All Might is quickly revealed in the very first pilot chapter and anime episode of My Hero Academia.

We learn that his muscled form is just a facade, that his true form is a scrawny skeletal man barely clinging to life, as he perpetually hacks up blood. His years of super heroics have taken their toll, as a large part of his body has literally been torn out of his chest. He’s lost most of his stomach, and a good portion of his lungs. For all intents and purposes, he’s living out a miserable existence as his mutilated body refused to keep up with his formerly-cheerful physique. 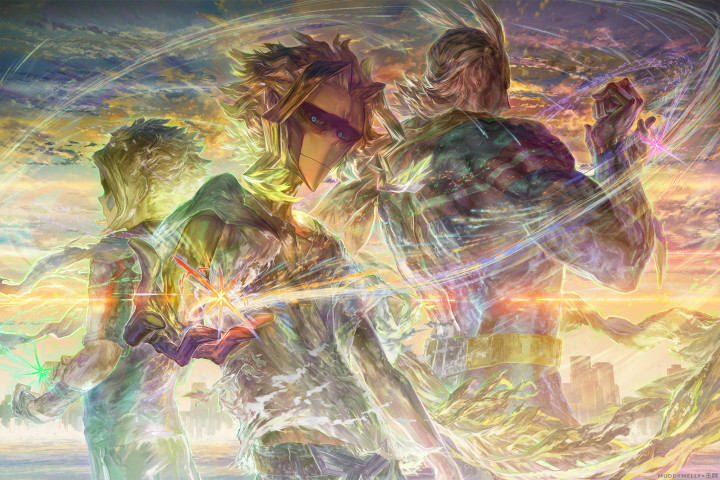 His muscled physique is quite literally smoke and mirrors. Towards the beginning of the series, he can barely hold his superhero form for more than three hours a day. But this is the key that makes him so interesting. All Might is introduced as fighting a battle not against some epic villain, but against his own failing body. And it’s battle that he’ll never win.

Giving superheroes limitations and weaknesses is always a great tool to help increase drama, and All Might’s limitation and real form serve as a ticking clock for tragedy. All Might’s greatest strength and biggest weakness is the fact that he will never give up or back down. His inability to let go of his status as the symbol of peace means that he is always fighting a battle against his own limitations and failing health.

As a longtime fan of shonen manga, this is the aspect of him I find most endearing. Nothing gets me more hyped than when I get to see a character pushed beyond all of their physical limits. To see them put their values on the line, as they become battered and blood-soaked, as they’re forced to push forward whatever their passion is against insurmountable odds. It’s something we see all the time in the genre, but only the really great manga authors are capable of pulling it off.

Most of the time, we see the lasting consequences of an especially brutal bout taken away within a few seconds. A character can break all of their bones, sustain critical life-threatening injuries, but after a few bandages, they're fine and good to go.

That’s not the case with All Might. His power is one that is continuously fading. Being in action is painful, something that bares drastic consequences for him in the long run, as the time he can maintain his muscular form decreases with each strenuous bout. 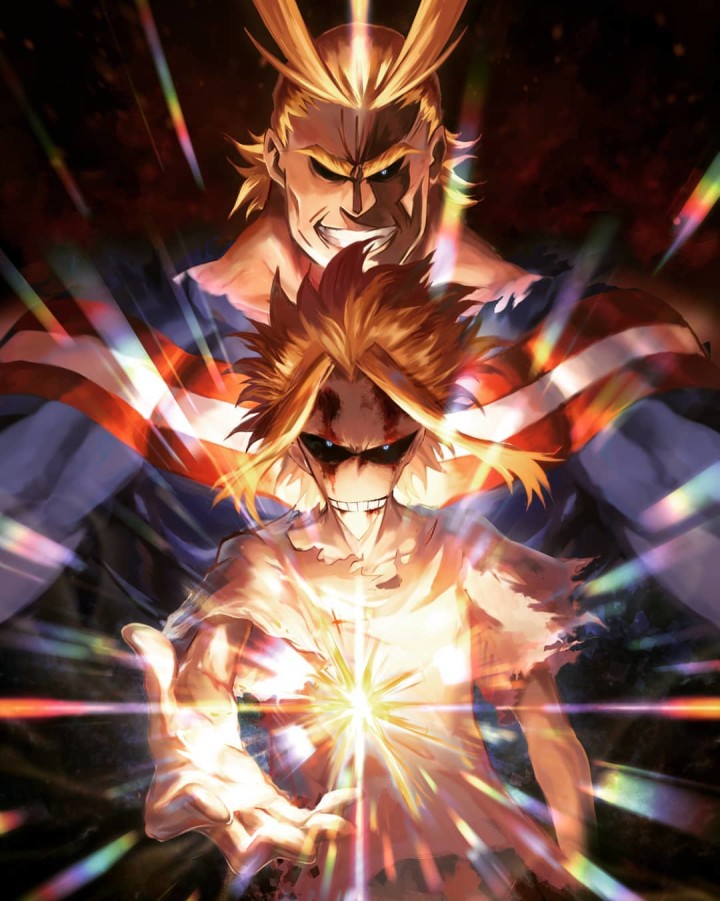 But still he persists, his unwavering commitment to his responsibility as the symbol of peace is what makes him go above and beyond the typical Superman-style strongman archetype. The fact that the same passion still brims within the dark hollow eyes of his skeletal form is what makes him such a beautifully tragic hero, as well as the best mentor figure you could ever ask for in a shonen manga.

This all culminates in my favorite scene in the manga thus far, one I can’t wait to see the studio Bones animate. So, if you’re not caught up on the manga, be warned: spoilers abound. Later on in the series, we see All Might come into conflict with his immortal rival, the man whose quirk-stealing ability is indirectly responsible for creating his superpower, One-For-All.

He is simply known as All-For-One. He is the great villainous mastermind behind Tomura Shigaraki. All-For-One comes to save his apprentice from a full-scale hero raid, and the two titans clash finally clash.

All-For-One is just about everything you could ask for in a final boss villain. He’s got a bitching suite. He’s got that awesome mask, which just screams dark overlord. He has multiple quirks, which he can stack together to create absolutely ridiculous attacks. He’s basically the satan of the My Hero Academia world. Not only does he pose a physical threat to All Might, but he also attacks him mentally, goading him with debilitating revelations about his past.

As the fight wears on and city blocks are leveled, All Might’s strength begins to waver. His real form is exposed in full public view. The world is shocked to see him revealed as an emaciated skeleton. His eternal fiery rival, Endeavor, is enraged to see the true form of the man he could never surpass. But, as the shock dissipates, there is a lone women stuck amidst the rubble. She starts to shout, “Don’t Lose, All Might, Please Help!” Then the crowd erupts in chorus of cheers. 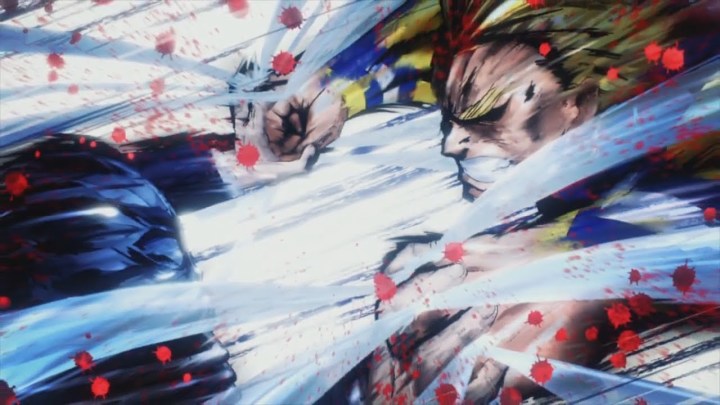 “We believe in you!”

All that is good and right in the world is resting on his shoulders, and even though the power within him is a dying light growing ever dimmer, he pushes himself beyond what his failing body can muster to land just one last final blow!!! AND, he triumphs against the ultimate evil! But, with this last show of strength, his power vanishes forever, bringing about an end to the symbol of peace.

This is what takes All Might above and beyond his generic origins. The fact that he is perpetually fighting against the dying light of his body, and the faltering limitations of his powers are what make him a figure worthy of the Superman mantel. The best heroes aren’t the ones who murder and maim their opponents. They're the ones who risk life-and-limb for something greater than themselves. There’s a reason why people still remember the train scene from Spiderman 2. There’s a reason why Captain America standing up to Loki in the Avengers is the first scene where the movie really starts to click.

This is the ideal of heroism that has not been degraded by post-modern reconstructive cynicism, but the kind of heroism that, while unrealistic and often tragic when seen in the real world, serves as a greater ideal for our less-than-ideal selves to strive for. That is why All Might is the hero we deserve, and the one we need.

When not scrounging the internet for the best content for Jerrick Media, Isaac can be found giving scritches to feathery friend Captain Crunch.

See all posts by Isaac Shapiro →