by Kota Wolfe 6 months ago in nintendo

Thought I would come here and share my thoughts on the new Pokémon game and my feelers on the new edition console!

They really made it hard for me to choose because I adore both Eevee and Pikachu.

I own like A LOT of Pikachu things from plush to mugs! So in the end I felt I wouldn't be me if I didn't go for the classic little rodent.

One thing I do like is depending on your version you choose also determines your console box.

The back, however, depicts both pokes. 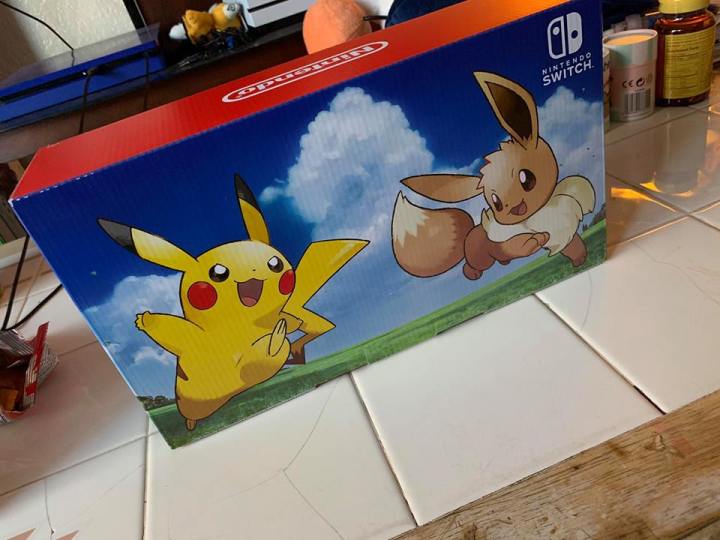 The box design is overall pretty simple—pretty nice looking, open area with grass and you got you some clouds. I am more surprised they didn't humor us old fans with a more classic look to the box being this is a supposedly "Yellow" remake.

So I originally just had the game itself pre ordered as I owned a Switch already BUT a morning I woke and caught on to some early announcements to this limited console I literally texted my Fiance and was like DUDE and blabbed about it for a bit then hopped out of bed and gathered my old console up, cleaned it out ect ect and went to go sell it just to pre order this one. Couldn't go wrong here I figured since I would get the game, the console and the little poke-ball controller which I also so did want.

I was super happy I managed to get it before all the pre orders were sold out.

The downside to that was I was without a Switch to play on until this got released and let me tell you that felt like the longest wait because I love my Switch console. I swear I use it more than my 3DS. 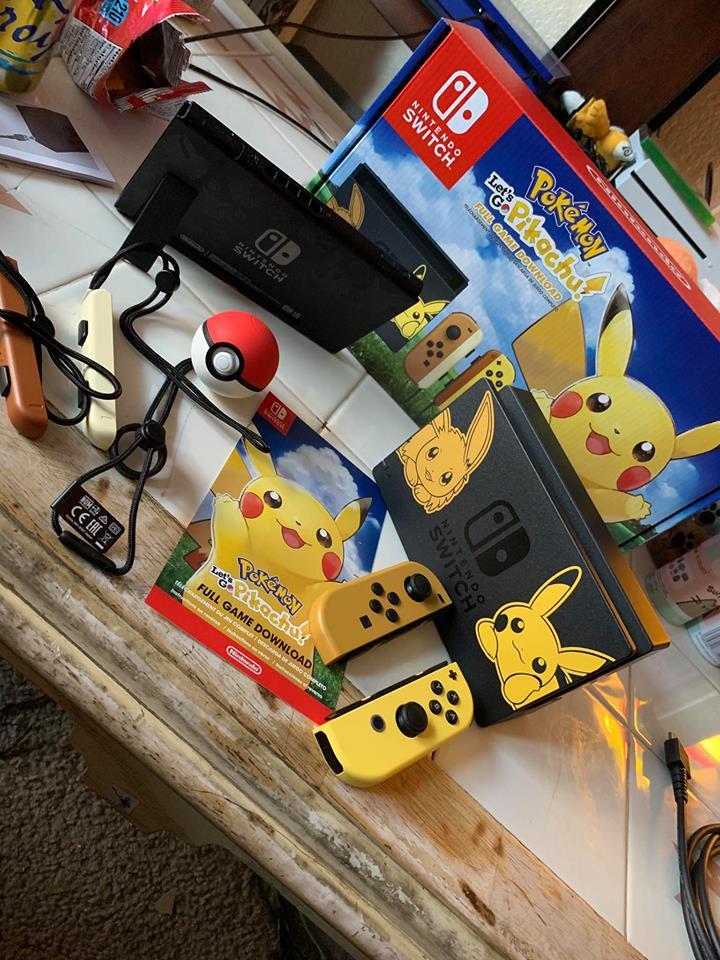 So on to the other stuff.

I like the console, it's ok for a LE. I feel they could have done more with it, but I also am not too upset either. Works great as it should, the designs are simple and not all over the place.

The decals are cute and I am surprised they didn't have themed consoles for the specific versions. (Maybe in the future?)

I love the print design on the back on the tablet attachment. It is pretty much silhouettes of Pikachu and Eevee and its smooth overall and not all bumpy. 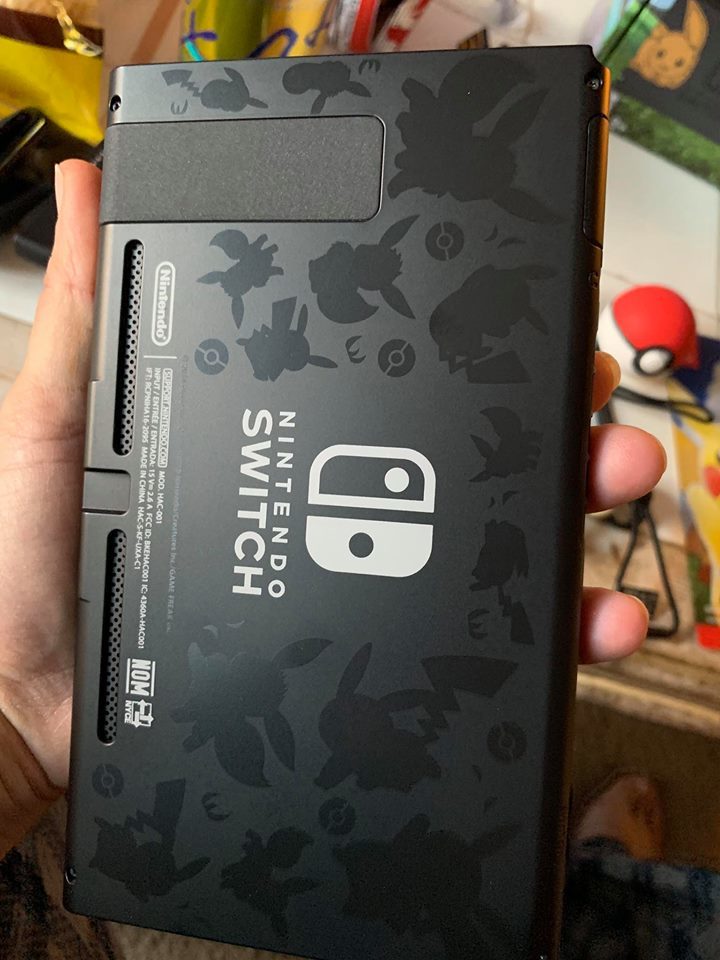 I dig the joy-cons. I read many people were not thrilled with the bland colors but I think it really fits the theme. If I had to say anything on it, maybe a darker brown next time.

The poke-ball controller is smaller than I had thought it would be and is surprisingly comfortable to hold and use. I was unsure if I would like the feel of it but that did not deter me from wanting it. This thing works way better than the joy-cons for the game itself and has a better sensory I feel for when you are throwing the pokeball on game (just don't literally throw this thing—you aren't supposed to do that).

This thing was a nostalgia grab for me all the way. As soon as I heard we could walk our Pokemon I was sold.

I had the original poke-walker with heart gold and soul silver and I really loved that thing.

You could take a selected pokemon for a walk with you, it would gain exp, and sometimes you would receive item gifts back into your games!

The poke ball is on a whole new level. Sure it's missing that old screen we had on the walker but this thing is a bit more interactive.

So the same thing, you choose a pokemon to walk with, you get exp and you get items. You can shake the ball while you are out and here it make noise, and I've noticed sometimes it will make noise all by itself (maybe he wants out or attention)

On top of that, we can use this thing with Pokemon GO.

If you are walking a pokemon it will auto spin stops for you so you do not have to, it also works like a go plus and you can catch your pokemon with it.

I am like in love with this little device. 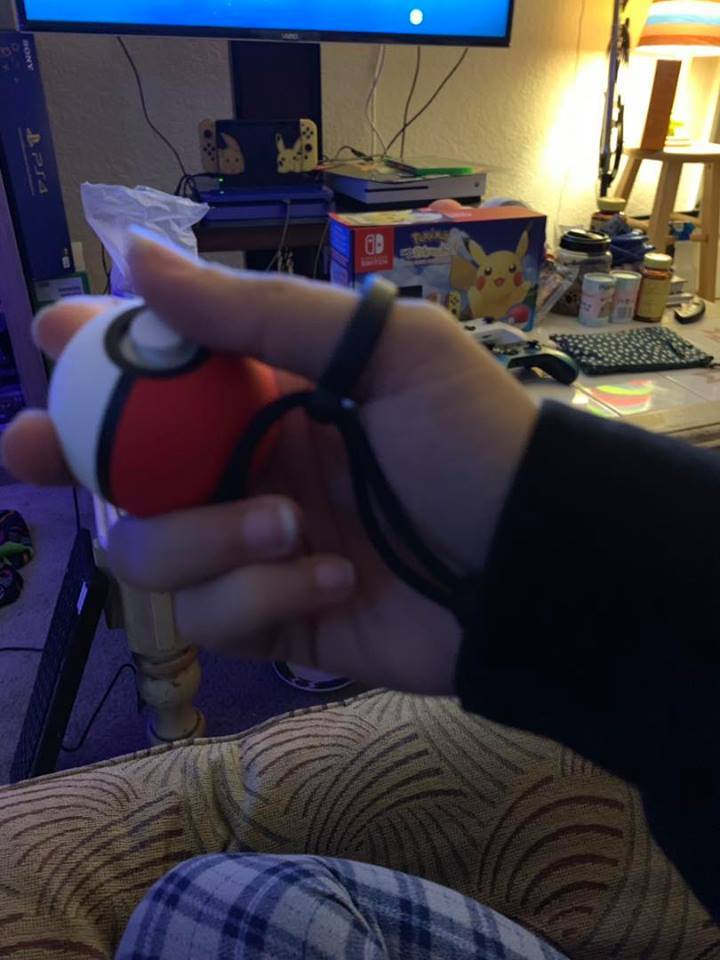 The game included was a scratch off digital code and not preloaded.

I like that they are codes now because, well, they will always stick to your account, whereas sometimes the preloaded ones didn't.

I do wish it came with a hard copy though, as I am more of a fan of those than digital (collector purposes obviously).

The game itself I feel is a great way to pull in the next generation of pokemon trainers. It's got those upgraded graphics, it is a speedy game, and lots of interactivity.

I doubt some of these kids today would want to pick up an old copy. They would look at those pixels and be like "the crap is this?"

They did away with HMS, you now get abilities that you can use whenever, and they don't take up moveset space either! I actually like this.

You can play with your Pikachu or Eevee similar to that of the Pokemon Amie.

Now here is where it gets me.

My fiance got the Eevee version since it was the one I didn't grab and a big part of me wishes I did because Eevee makes the friggen cutest of noises and purrs and ugh!

Go with Eevee, guys, if you want cute noises.

Gameplay is pretty solid, I do not have any fancy methods of shiny hunting. Game is easy. If you are coming from playing all the older games into this one, game is stupid easy.

I am literally soloing this with just Pikachu.

IVS are busted. You can break the barrier with training with these candy things.

I love that we can see the Pokemon in the wild walking around versus the random jumping out at you. It is kind of a nice and refreshing aspect of the game.

It also carries over some elements from Pokemon GO.

Like you do not fight wild Pokemon, you just kind of throw the balls at them. It's alright, but I would very much like to just battle them the traditional way.

Great for new people, I personally do not wanna use it.

Gameplay is short and I feel one could easily have this beat in 24 hours.

Despite my small dislikes, I love the game and I couldn't be happier with this release.

Do you buy it? Heck yea.

Just here to do what I love :)

See all posts by Kota Wolfe →