Pokémon GO Will Get Generation 3: But When? And What Features Could We Expect?

by Matthew Bailey 2 years ago in new releases

The 3rd generation could change how Pokémon GO is played even more dramatically with a few features that we are likely to see in upcoming releases.

When the augmented reality game Pokémon GO arrived on mobile devices around the world in July 2016, it found instant and massive success. It spawned a global addiction that, although it has dwindled recently, has proven to be one of the most popular mobile games of our generation.

Players have spent hours entering a world based on their own GPS information to capture wild Pokémon throughout local neighborhoods and cities. Pokémon GO builds off of the essence of the original Nintendo franchise, in the sense that it allows you to capture, "train" and battle gyms with your captured #Pokémon. It diverges a bit from the main series' mechanics in that the combat is different (though there are other games like Pokémon Go that do have JRPG combat) but at the core it's just a variation of the original Pokémon success.

Since its release, we've seen several updates, upgrades, downgrades, and bugs that have left some fans feeling like they're riding roller coaster of release notes. Recently, Niantic Labs (the development team behind Pokémon GO) has announced an update that will hopefully bring back players by the boatload.

Niantic has officially announced that the 2nd Generation of Pokémon would be released on December 12. This announcement coincides with several data-mining attempts by fans into the most recent patch revealed that code was added for the next 100 Pokémon. This includes everything from the starters Chikorita, Cyndaquil, and Totodile to the legendary creatures Ho-oh, Lugia, and even Celebi.

The fact that the 2nd Generation is heading to Pokémon GO is a huge step towards achieving that aching desire to become a Pokémon Master and catch them all. So with Generation 2 on the way, the next obvious step is to look at what's next for features as well as future generations of Pokémon.

And it Gen 2 released only five months after the game's release, it's reasonable to expect Gen 3 Pokémon before the end of 2017.

How could Pokémon GO incorporate the 3rd Generation?

Well, that's really up in the air, considering that we still don't fully know what's coming with the 2nd Generation update. Fans are expecting new features like breeding, special evolutions, pre-evolutions and, of course, 100 new Pokémon.

But the 3rd generation could change how the game is played even more dramatically. Here are a few features that we are likely to see in upcoming Pokémon GO releases.

Images below are based on fan mockups. 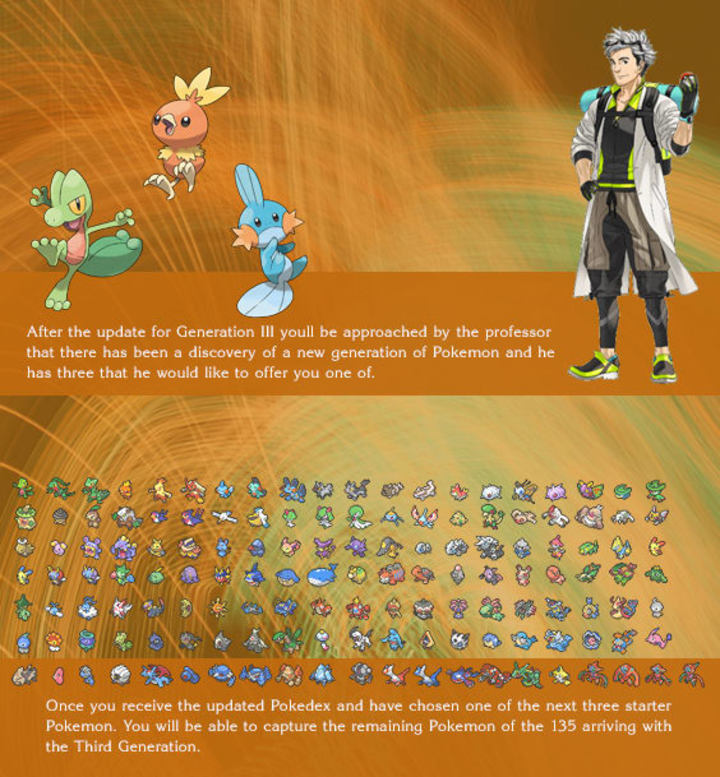 That would be a HUGE step forward for Pokémon GO, to introduce that many new creatures to be captured that aren't related to the currently captured Pokémon.

More importantly, this would inspire players to once again get out into the world and explore for these new creatures. 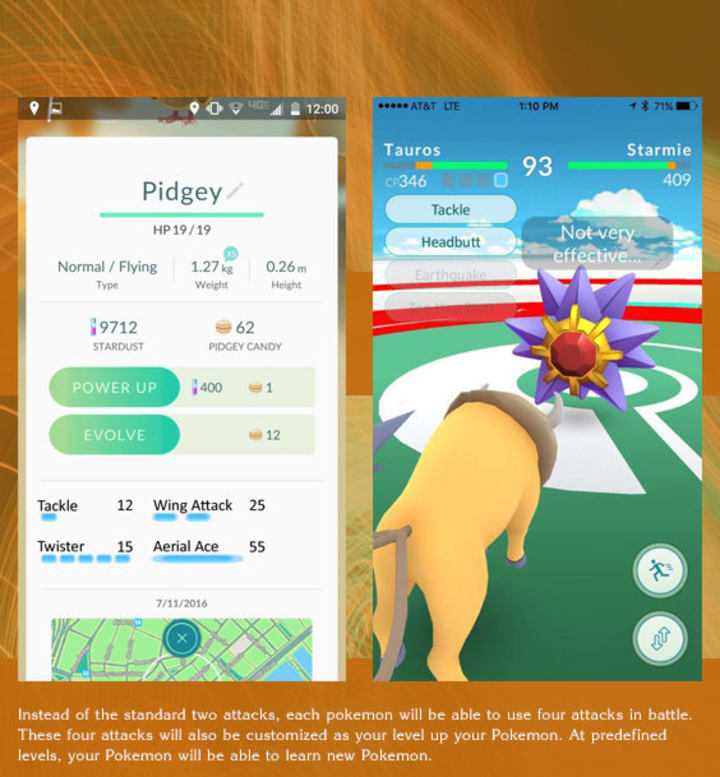 If you really think about it, one of the more disappointing aspects of Pokémon GO is that each creature only has two attacks: a normal and an advanced skill. In the core games, your collection of Pokémon could each know four unique moves, and would be able to learn new attacks as they grew and evolved.

Waiting for the 3rd generation to introduce a new battle scheme and attack possibilities could be a welcome addition to the gameplay.

An update like this would go a long way to help Pokémon GO retain its individuality and would give the game a facelift of sorts allowing the game to stay fresh instead of falling into monotony. Adding a variety of attacks would also impact gym battles even more as it would add a greater deal of control as to who you take into a battle. 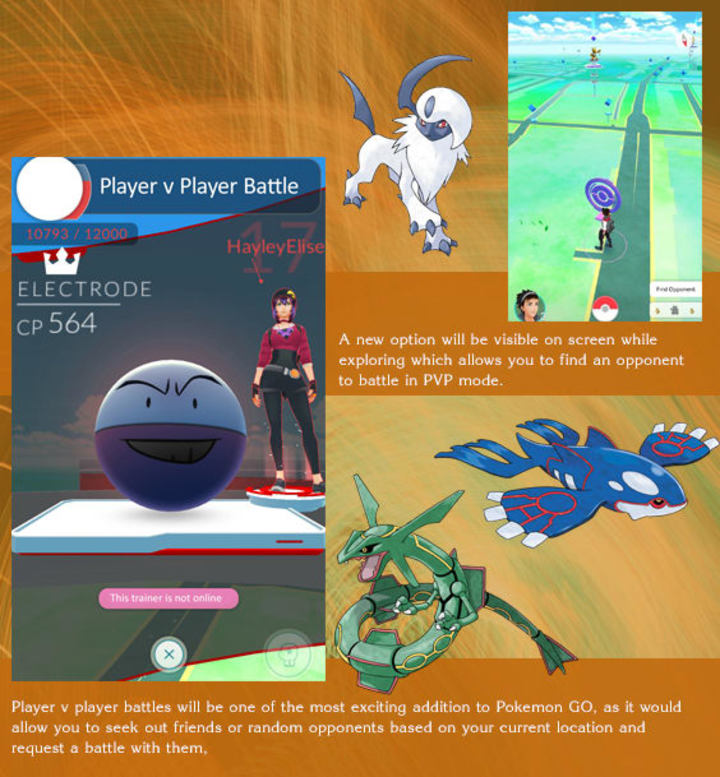 Along the same line as adding more attacks, player vs player battles could be introduced with the 3rd generation, and would be a welcomed addition. Exactly how it would work could be difficult in terms of server power and connectivity, but if it were possible to interact with other users in your specific vicinity then you could initiate battles with a simple button click.

You wouldn't necessarily see the character on your screen, but possibly a new button function would be on screen that would be labeled as "search for battle" and if another user had also clicked that button, you would be paired off in a battle.

If player battles were truly going to be introduced, then the obvious other introduction would be the Battle Tower/Battle Frontier as an arena style location where trainers could gather and battle in a centralized location. Just as gyms were based on locations within a city, the Battle Tower would likely be based on a similar premise and be localized to specific areas geographically. 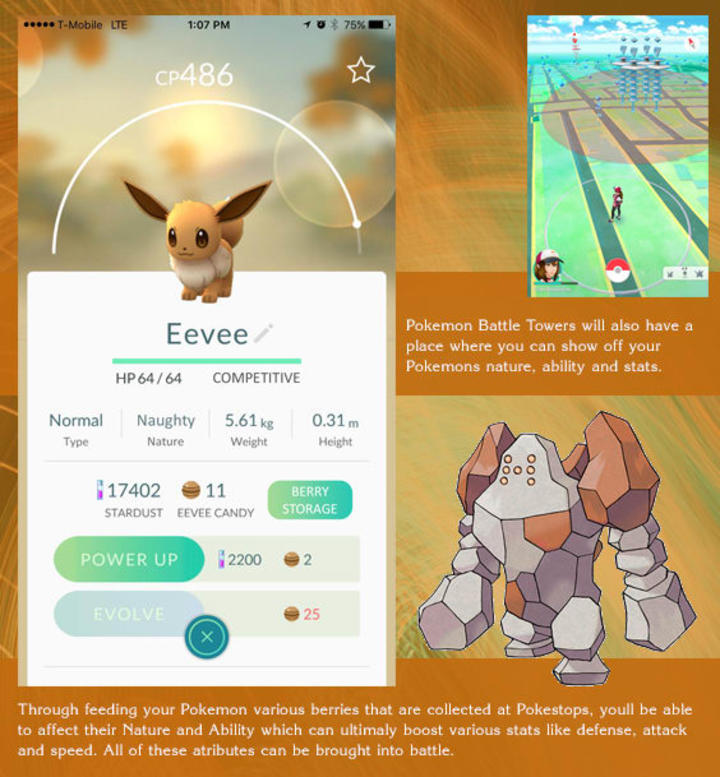 How this would be interpreted in-game is a little tricky, but in Generation 3 games the standard data structure was completely overhauled; giving each Pokémon an individual personality value. This value was affected by a variety of influences like: its special abilities, the nature of the Pokémon itself and even the Pokémon's gender. This personality value could also be affected by various berries you could feed your Pokémon as well as the weather itself.

Adding the ability to alter your collection of Pokémon could be an interesting element to bring to the augmented reality of Pokémon GO. Introducing berries that altered the personality could be a unique twist to the already formulaic system that Pokémon GO uses. If you could feed different berries (collected from Pokéstops) to your Pokemon to alter their attributes and in the Battle Tower could also be an option to compete for ribbons, just like in the third generation of games.

Ultimately, there are so many unknowns when it comes to the future of Pokémon GO, but there is a lot of potential for the game moving into the third generation and beyond.