Is the color one should wear when one is happy 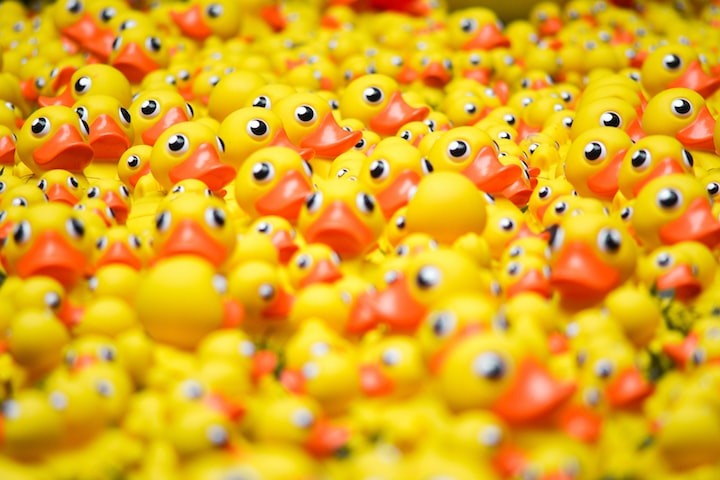 Photo by Andrew Wulf on Unsplash

She organized the ingredients in straight lines on the marble counter. Garlic, olive oil, basil, pasta, tomatoes, salt. “Heat a medium pot of water to boiling.” The system’s voice dictated over a cheerful piano melody. “Add a sprinkle of salt to water.”

Her ingredients were pre-measured and the steps were simple. Many of her non-working friends dabbled in the culinary arts, so their partners could brag about their satisfied appetites and taunt coworkers with the unique scents of dishes from exotic places that no longer existed. Mary preferred the pre-packaged meal kits delivered to her door. They eliminated the risk that she might undercook or burn dinner. The trucks that delivered pre-cooked meals to the elderly, widowed, and sick, also delivered shame. Simon cooed as he took a fat foot in his hand and stretched it toward his face, before popping a big toe in his mouth.

The neighbors wouldn’t think much of it. A new mother ordering dinner for her husband was not a scandal, but it might sour Seth’s mood. She looked down at her yellow smock and rubber duck patterned apron. This was her job. Her duties included cleaning, cooking, laundry, and keeping her family happy in yellow. She occasionally witnessed ruddy-faced, working spouses leaving home with red ties, heads down, strides long, edges of their mouths turned down in a stubborn frown. They would probably deny being angry at their spouse. He or she might blame a sports’ loss, or work stress, but onlookers would quietly wonder what color their spouse was wearing. Were they also in red, lamenting the mayor, and decrying the state of the economy? Were they wearing blue and haphazardly leaving chores half-done? Naturally she heard stories of unhappy spouses who wore black and languished in bed all day. The system eliminated depression years ago, but occasionally she would hear whispers of a non-working spouse taken by post-partum laziness. There were no punishments like the working spouses received from their superiors. Only a white truck delivering hot meals at night, and a frustrated working spouse leaving the house in a red tie.

Her Seth never left the house in red ties. Once, when Simon was only a few months old, she caught the flu and didn’t get out of bed for a day. Seth prepared their dinner, and helped feed the baby through the night. She was overwhelmed with peace, until the next morning he brewed his own coffee, and then put on his blue tie. The shock of seeing the yellow hanging, unworn in their closet propelled her out of bed. She put on her own yellow dress, and returned to her chores.

No one would blink twice at a new father declaring his state of tiredness to the world, and yet, her duty to her family motivated her. She owed her entire life to Seth, including the comfortable suburb they were placed in. Their colonial style home, with its floor to ceiling windows that let light pour into her living room as she cared for their son. Their state of the art kitchen, with system integration so that she received alerts on her watch when she was low on eggs. Their entire quality of life was due to his placement with System Enforcement. She couldn’t stand the thought of sabotaging his work by letting him go to work tired. She couldn’t imagine her life without Seth. His straightforward manner of problem solving soothed her anxiety. His simplified way of thinking cut through her daydreams and helped her remain focused on objectives, like meal preparation.

“Empty can of crushed tomatoes into a pan with sautéed garlic.” Bach’s symphony quieted while the system guided her. The ease of the steps allowed her mind to wander.

She remembered everything about the first time she met Seth. The sticky linoleum floors, the pale green lockers, the plaster ceiling with cracks in the shape of webs. Everything about that day was familiar, except for him. He was a transfer from a different school. It was uncommon for the System to initiate transfers so late in a child’s education, but school placements were never questioned. Her school was a vocational one for children who did not show exceptional promise in math or science. The rumor was that Seth, although incredibly intelligent, was a deviant. So naturally every girl was talking about his piercing blue eyes, his giant frame, and his rebellious, militant haircut, but the first thing she noticed about him was his intensity. He made eye contact with her and didn’t drop his gaze for two seconds, three, four. Then he smirked and walked away. She didn’t see him again for weeks.

“Cute socks,” he said. She gazed down at her feet. She was wearing white sneakers and socks with frilly lace around her ankles.

“I would still be taller than you.”

The third time she left school with him on his moped. Usually at the end of day he sped off by himself, or with a girl several grades higher than him on the back of his bike. That afternoon he pulled up beside Marigold. She felt stares heating up the back of her neck, and a momentary high as her heart pumped faster. There was zero chance she would say no, so when he pulled off in the opposite direction of her home she felt it was her fault for not inquiring where they were going. She didn’t care. Even if she’d known she would be grounded for a month, she still wouldn’t have cared.

The blood that went to her brain rushed back to her heart, and she felt faint. For a second, she imagined losing her grip and flying off the back of the bike. He’d barely spoken a word to her. She wouldn’t have heard him anyway over the wind, and it hardly would have mattered what he had to say. She’d already committed to going wherever he was going. They pulled into the city’s grocer. Without a word, he parked, dismounted, and began walking. Mary followed him cautiously.

He spoke to her without turning around. “You smoke?” It was a ridiculous question. They were both underage.

“Are you fucking kidding me?”

He let out a dry chuckle without breaking stride. “I know the cashier.”

He shrugged. “She’s my homegirl.” There was an awkward pause, and then. “Do you want anything?”

She was pensive, and then nodded. They reached the glass entrance to the one-story, concrete building. “District #8 Grocery,” was spelled above the doors in glowing letters. Inside, aisles of cartoonish packaging were dimly lit by fluorescent lighting. He gestured towards a young caramel girl behind the counter. “I’ll be at the front.”

To her right, one aisle glowed invitingly. She’d always loved the produce aisle, ever since her mother explained to her why the city spent so much money making it aesthetically beautiful. “Profit margins, sweetheart.” She moved slowly towards the elaborate display. Fake coconuts hung from the top shelf, along with plastic fronds moving slightly to the hum of the air conditioning. Spotlights shone down on pineapples artfully arranged on beds of paper green leaves. Decorative pails of blueberries and raspberries sat on the bottom shelf beneath fake bushes. She stooped beneath a mango tree and grabbed a small bag.

They got back on his scooter and he drove, seemingly aimlessly. She grabbed dried mangoes from the pocket of his leather jacket and fed both of them as they rode by the last businesses, and then the last houses, and then miles and miles of greenhouses. It wasn’t the first time she’d seen the glittering warehouses. Her mother used to pack picnics when she was a little girl, and they would eat lunch on a hill in view of the sparkling giants in the distance.

“That’s where the food you are eating was grown.” She would say, pointing to the magical glass buildings on the horizon.

“Why is it sparkly?”

“It’s made of glass and metal to let the sun in, but keep acid rain out.”

This time she gazed at the huge palaces of glass and irrigation, marveling at how humongous they were up close. Glass walls, buttressed by steel, towered hundreds of feet in the sky. They looked like they were housing entire lush forests of vegetation. Everything from expensive tropical fruits like bananas and mangoes, to cheap vegetables and nuts growing under the ground. From this angle, it seemed impossible to believe there was any global food shortage.

Note: the above standalone short story is part of a collection of short stories written on this dystopian future

More stories from Vineece Verdun and writers in Futurism and other communities.