by Andrew Johnston 2 months ago in science fiction

A tale from the Cavalcade of Rejection 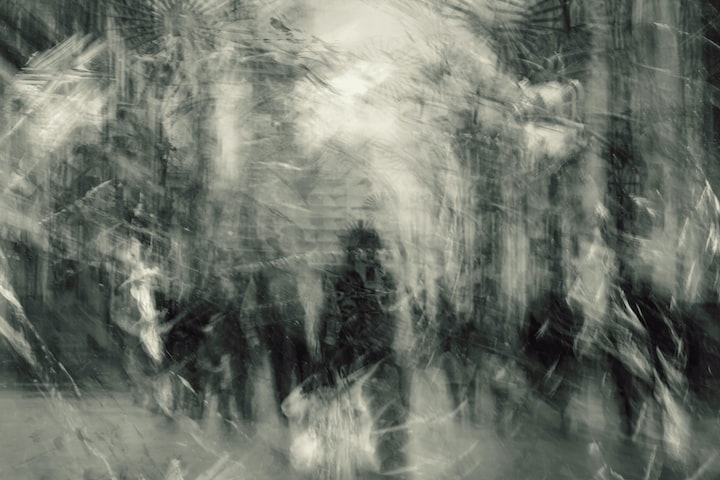 The morning greeted me as it always does, in a strange room surrounded by strange things and a strange face staring back at me in the mirror. I know that I am now Heather, and by the end of the day I will know much more about Heather, and tomorrow it will no longer matter. I learned a great deal about Tyler, whom I was yesterday, and plenty about Cassandra, the self I was before that. But what I know about them doesn't matter at all to Heather, the me of today, and it will matter less to the me of tomorrow - whomever that will be.

The situation is a shame, really - I enjoyed being Tyler a great deal, and on a deeper level I hoped that perhaps I could stay as Tyler, if only for a little while. Which isn't to say that being Heather won't be enlightening in its own way, and I doubt it will be horrible. I feel very healthy, I have lots of pictures of people who I'm sure I'll discover are family and friends, I'm obviously not wealthy but neither am I impoverished. Even so, I harbor doubts that I'll enjoy Heather as much as Tyler, or for that matter Grace, or...what was his name? It's eluding me for the moment. His was my favorite thus far, one I'll never forget, but it was hundreds of selves ago and the name is just a fuzzy blot in my memory now. I'd been thinking that this was an early me, but maybe I've simply forgotten the ones that came before.

Am I correct that this is perplexing to you? You'll have to excuse me - I so rarely discuss my manner of existence with others, it's been a long time in fact. I can forget how alien this all seems to a person who is a singular person, the same person all the time without exception. In truth it's very confusing to me as well, even after all this time - even after so much time, in fact, that I can no longer recall how much time. Every day for as far back as I can remember, I've awoken as a brand new me, with a brand new life that was unknown to me the day before. Today I am Heather, and yesterday I was Tyler, and perhaps tomorrow I'll be Claude or Janet or Felicia. This has continued without exception for hundreds of days and hundreds of me, each different in life and lifestyle and thoughts and dreams. I live the day as this new myself, experiencing all there is of this existence, and then awaken to a new existence, a new myself, and begin again.

There are a few things I've gleaned about this, a few fundamental rules that offer me some degree of stability in this turbulent dream-life of mine. Each me is a life fully-formed, a person with a history and a social existence that long predates my entrance. Further, when I acquire this new me, I truly become myself. Heather existed before me, but I do not "possess" Heather, I have become Heather. I act as Heather does because I am Heather, at least for the rest of the day. Now, I can very much remember my other lives, my other selves, and I am still very attached to Tyler, but this will pass. In the meantime, Heather does not know of Tyler, or of Cassandra or Grace or any other me, and she will not act upon their experiences.

I've tried in the past to force the current self to behave according to previously acquired wisdom. I had a particularly enlightening self called Martin, and when the me that followed - Cynthia, I believe the name was - encountered an analogous set of problems, I was prepared to address them as Martin had. Alas, I was no longer Martin but only Cynthia, and Cynthia could only behave as she always had. It was truly an embarrassment, one I'd hoped to avoid in the future - but no other me ever met Martin, or Cynthia for that matter, or any other me, and thus I could never learn from myself. Hundreds of novel and distinct experiences - thousands, perhaps - and I haven't the means to apply their lessons. Maybe I never will.

How many have there been, anyway? Everyone wonders, but they're always frustrated by the answer, as am I. It's not as though I could keep a list, you understand. I once tried to track my various selves through sheer concentration, but this was only partially effective. There have been so many that I can really only distinctly recall those that were extraordinary in some way, or else truly unique in lifestyle. Many of them are similar, and these can blur together. Amy, for example, led a life that was distinct in many ways from Veronica...or was that Genevieve? Well, this is one of the problems, keeping them all well-organized. It is much easier to remember types, as long as I use caution to avoid excessive stereotypes. But how does one avoid being a bit broad in thinking after seeing common elements in a dozen selves? True, they are all unique, but ultimately they are only a dozen points of slightly different colors in a glorious display that shines with the vibrancy of a perfectly realized rainbow. That's how I remember them now - not as individual selves, but in terms of their overall contribution to the work I've been presented. That's why I can't remember what's-his-name, even though I had a lot of fun as him. I can only allow myself a rush of emotion, and over time it's become a sensation overwhelmed by the feelings of the me of the moment. Truly disappointing, if you can imagine it.

There's no need to ask the next question, I can foresee it - do I remember the first me? Or was there a first me, a time when I too was a person and not merely a sparkle in that tapestry? This is a good question, one that everyone asks me - or that I assume everyone will ask at least, and I'm usually correct. The truth is, I don't remember if anyone's ever asked that exact question. The truth is, I don't remember much of anything. Of precise details, I can remember back about ten selves, and a few others who led particularly enlightening or difficult lives. In more general terms, I can recall back thirty selves plus a smattering of selves before. Back fifty or sixty selves, I can remember a few details, and back a hundred or so selves I can remember only the most general categories - those colors on the tapestry. The next fifty-odd selves are shrouded in mental fog, and beyond that is simply shadows. If there is an original me, or a true me, then it exists in the shadowy place, too far back for me to be conscious of it, far beyond my memory. I'll never truly know why this happened to me, if it was done to me or if I asked for it willingly, or if it emerged from me at some past point.

Then again, maybe I have been myself - my true self, I should say - more recently. For example - who's to say that Heather isn't the true me? Maybe I was Heather at the start some two thousand selves ago, and I've now returned, and I might even stay. Ah, but I often think this. I especially think it if I am in a cheerful place, like Tyler, or in a grim spot, like Carl. Oh, I was very glad to stop being Carl. It is purest tragedy that the true Carl can never stop being Carl, not in that this would allow him escape but because a day out of his own flesh might give him the perspective he needs to liberate himself from his own problems.

Is that why I volunteered for this fate - for perspective? For insight? It's certainly something I've asked myself during moments like this as I emerge from one self into another. As a society, and beyond that a species, we've long been seeking a means of cultivating empathy. We've done it through storytelling, but novels and films are still so limited in their reach. I've achieved the ultimate form of empathy - not just "putting myself in someone's shoes," as they say, but actually becoming the owner of those shoes, turning from me into another me, and then into yet another me. Truly becoming that person down to the marrow, if only for fourteen or sixteen or eighteen hours. I'd call it the most profound experience of my life if I could remember anything about life as it once was.

All of this must sound truly disturbing to you - it typically does to singular people. That initial rush of information can be quite a trauma even to me, a being not anchored to an ego. After all, I'm not Heather yet - I'm still Tyler, anchored in the body of Heather with her feelings flooding into my mind, penetrating the very core of my being. Does this terrify you, this prospect of forces beyond your control editing your character? Does it seem like a violation of your inner life? I would agree, but in a few hours I'll have integrated as Heather, and Tyler will be but a memory; I will be very comfortable as myself, the current myself. And when I awake tomorrow as, let's say, Janet, I will be Heather anchored in the body of Janet, afraid of what's to come. One never quite adjusts to this sudden shift, but it's not the existential nightmare you might imagine. Doesn't everyone change every day? Are you the same you that you were ten years ago, or ten months, or even ten days? Would you recognize the you of another time?

Ah, but I'm no philosopher, I'm just Heather, and I'm comfortable like that. I can see that you don't believe that, and I wish I could explain better, but people such as you are not a significant part of my tapestry. Perhaps in the future, I'll have the opportunity to be you for a day. Perhaps I've completely forgotten that I was you. Such is existence.

See all posts by Andrew Johnston →