by The Green Shoes 11 months ago in future

Shane is a journalist tasked with writing the 10th Anniversary of the Global Acceptance of Messianism in this dystopian tale. 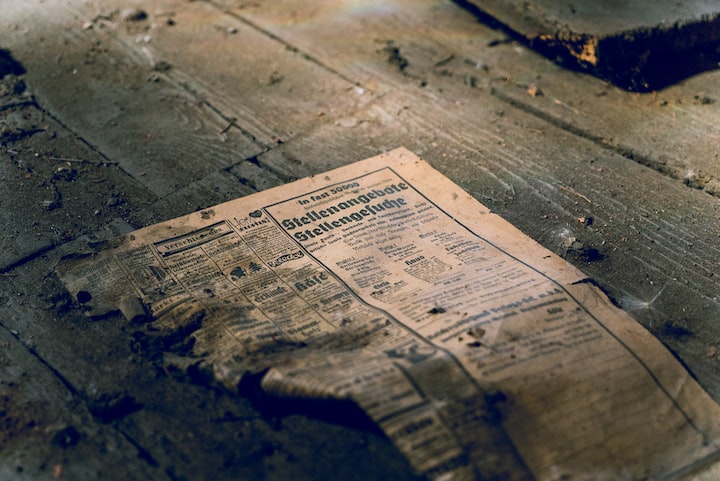 Shane leaned back in his chair and crumpled up the latest failed attempt at a compelling article on the Tenth Anniversary of the Global Acceptance of Messianism as the only legally practiced religion on planet earth. Coincidentally, this was also the anniversary of the disbandment of the United States of America. Shane’s editor had tasked him with writing the front-page story of the Messianic Press’s Anniversary issue and he had no idea what to write.

He leaned forward and tapped a few random keys on his laptop’s keyboard before deleting the latest failure and stared at the blank screen. He sat up straight, an idea suddenly hitting him. He would write a memorial to the late President MacArthur’s term as America’s final president. He began typing furiously.

Today we remember President John MacArthur, the last man to lead the former United States of America. Ten years ago, today, the Global Religion War ended, leaving humanity on the brink of extinction. Messianism saved us all.

Shane rolled his eyes at the propaganda he was forced to write. He didn’t believe in Messianism any more than the majority of the people living in Sanctuary City - what used to be Dallas, Texas - but if anyone spoke out against Messianism, they were sent away for “reeducation” and never seen again. Shane wrote the words he knew would appease the Prophets - their leaders - so that he could continue to live his life in relative peace.

John MacArthur grew up in former Washington D.C., the son of a career military man. MacArthur followed in his father’s footsteps and joined the Army at the age of eighteen. He swiftly rose in the ranks until he became a Three-Star General. At the age of sixty, rather than retire to a quiet life with his wife and three children, he decided to run for President.

The world was already on the brink of a global war, and MacArthur came along at exactly the right time. He won the election by a landslide and helped pave the way for the destruction of the world as we know it.

Shane stared at the sentence he had just typed, knowing he would never be able to get away with printing it, even though he desperately wanted to. It was true. MacArthur had backed the wrong horse and made some very volatile enemies. He was never known to back down from a fight, but there was no recovering from this, no retaliation that could have saved America from what the United Arab Nations had done to America during the Global Religion War.

He deleted the sentence and began again.

He won the election by a landslide and won the hearts and minds of those truly devoted to Messianism and its teachings.

“I’m such a sellout,” Shane mumbled to himself.

Unfortunately for MacArthur, the Iraqis saw his election as an opening for retaliation against the Americans for their long-time occupation of their country. Knowing they had a chance to stir the hornet’s nest, so to speak, the Iraqis began recruiting other unstable countries into their ranks. They joined forces with the Palestinians and made it their new mission to preserve Jerusalem as the Holy Land for the Protection of Religious Diversity.

Shane paused and re-read this last paragraph again and again. He was treading on dangerous ground by even mentioning the PRD radicals. He knew that they would love to see their name in print, especially on the front page of the Messianic Press. He had heard of small bands of them hiding in Sanctuary City but had never met any of them personally. They kept to themselves and he kept as far away from them as possible.

This obviously angered the Israelis, who had been fighting for the rights to call Jerusalem their own for nearly a millennium. Israel had the full backing of the United Nations, the founders of Messianism, so naturally, the rest of the world began to take an interest in their holy war. Country after country began choosing sides, banding together into two distinct groups: The United Nations, which included Israel, Russia, the United Kingdom, America, and Japan, to name a few giants; and the PRD, which included Palestine, Iraq, Germany, and China. All the major players in any significant conflict throughout history had officially picked a side. Global war was imminent.

“Now this feels like a history lesson,” Shane said out loud to himself. “Gotta keep it fresh.” He debated deleting those last two paragraphs but decided to keep them for now. It laid the foundation for MacArthur’s presidency and even though everyone knew the story by now, it still felt important to tell.

During the second year of his presidency, MacArthur hosted the Global Messianism Summit on that fateful summer day when the world officially broke in two. It was at this summit that the world’s leaders officially disbanded every other religion in favor of accepting Messianism as the only true religion legally practiced in all the world. The late president MacArthur was among Messianism’s biggest supporters. He believed he could convince the whole of the United States to follow his lead. If the Americans could accept Messianism, then their allies were sure to follow suit, and they did, to a point.

What MacArthur failed to realize was how truly unstable the Protection of Religious Diversity radicals were. The summit was a success, but it was the catalyst that the PRD needed to justify the dropping of the first of the four dirty bombs, now nicknamed, “The Four Horsemen of the Apocalypse.”

Shane sat back and chewed on the cap of his pen. Did he really want to get into the details of the destruction of the entire east and west coasts of the former United States? Shane remembered when the first bomb dropped on Washington D.C. on the fourth of July. The east coast was completely decimated and the plague that spread throughout the survivors, as a result, still weighed heavily on so many of Sanctuary City’s residents. Shane was just a lowly intern at the time, working as a mail clerk at a small Texas newspaper. He remembered watching every reporter they had scramble for information to help their readers understand what had just happened.

Shane knew he needed to touch on the “Four Horsemen” somehow, but he also knew that there was a very fine line between celebrating the anniversary of Messianism and blaming Messianism for the destruction of the free world. The last thing Shane wanted was a one-way ticket to reeducation.

The late President MacArthur had been with his family up in rural Maine at the time of the first nuclear attack. He fled with the survivors to the midwestern states and set up the new political capital in Chicago, but this was merely the beginning of the Global Religion War.

Shane paused. The second bomb was the worst of them all in Shane’s mind. It was nuclear, like the first, but the blast was also so strong that it triggered a tsunami, wiping out the whole of the west coast, taking Shane’s entire family with it. He had never fully recovered from that.

The second bomb killed my family, you bastards.

Shane pounded the delete button until that sentence disappeared from his screen, then took a deep breath and tried again.

The second bomb took out the west coast with a massive tsunami, but the United States was resilient and MacArthur kept the country together. With the Global Religion War raging on every inhabited continent on the planet, no aid would be coming to the Americans. Every country was on their own. With so much of the United States now devastated and uninhabitable, retaliation was not feasible, and MacArthur knew it. He chose to focus, instead, on attempting to rebuild what was left of the United States.

If it weren’t for the third bomb, some citizens of Sanctuary City believe the United States could have survived.

Shane had watched the third bomb wipe out Chicago with something of a numb expectation, taking every remaining political leader of the United States with it, including the late President MacArthur. By this time, could anyone really be truly surprised?

Because of this third bomb, Canada officially closed its borders to American survivors. Any American attempting to cross the border was shot on sight. It had become common knowledge that the PRD radicals had laced the first bomb with the plague, and the Canadian government had no interest in allowing the disease to spread to their own citizens.

What was left of America was so overcrowded by this time that the plague spread far too quickly for healthcare workers to have any hope of containing it. Looking back, the Canadians made the hard decision that probably saved millions of Canadian lives, but it also cost millions of Americans theirs.

The fourth and final bomb dropped on an overcrowded Nebraska town, completely wiping out what was left of the upper United States.

That was it, that was the day the United States folded to its enemies.

Shane didn’t want to think about any of this, but he knew it needed to be said. It was the very reason he and the six hundred thousand survivors of the former United States were now living in Sanctuary City celebrating the Anniversary of the Global Acceptance of Messianism.

Our Prophets rose up and lead the citizens of the former United States out of the ashes and into a new and promising future. Today, we celebrate the Tenth Anniversary of the Global Acceptance of Messianism and rejoice.

“There. I have officially condensed the worst year in the history of the world into a neat little package and tied it with a pretty little bow, but is it enough to keep me from getting killed?” Shane shivered, pushed the print button, and pushed back from his desk.

A.L. Shilling grew up in Southern California. She has earned her Master's Degree from USC. Go Trojans! She owns a local dance studio and dances with a professional company. In her spare time, she enjoys writing short stories of all kinds!