by Marguerita Tan 9 months ago in star wars

It isn’t perfect, but the 1999 sci-fi fantasy film has many outstanding moments that have stood the test of time.

Star Wars: Episode I - The Phantom Menace made its debut in May 1999. If you were a Star Wars fan then, it meant you had waited 16 years to watch another installment of the epic space fantasy saga in the theatres since 1983’s Return of the Jedi.

Written and directed by George Lucas, The Phantom Menace holds a special place in my Jedi heart, as it came during a stressful time in my life. Despite tight deadlines, my publishing firm colleagues and I decided to put work aside in order to catch an opening-night screening. It was one of the best decisions we ever made. Not only did The Phantom Menace delightfully transport us back to a galaxy far, far away, it also reminded us that escapism via great film-making brings much joy even when one is toiling in a rat race world.

It is not perfect but The Phantom Menace certainly does not deserve the ridicule and brickbats thrown at it throughout the years. Yes, it does have a few missteps, but the first film of the Prequel Trilogy (1999-2005) has also given us some of the best cinematic moments in Star Wars history.

In view of its 20th anniversary in 2019, here is a list of the hits (a lot) and misses (not much) from Star Wars: Episode I–The Phantom Menace. 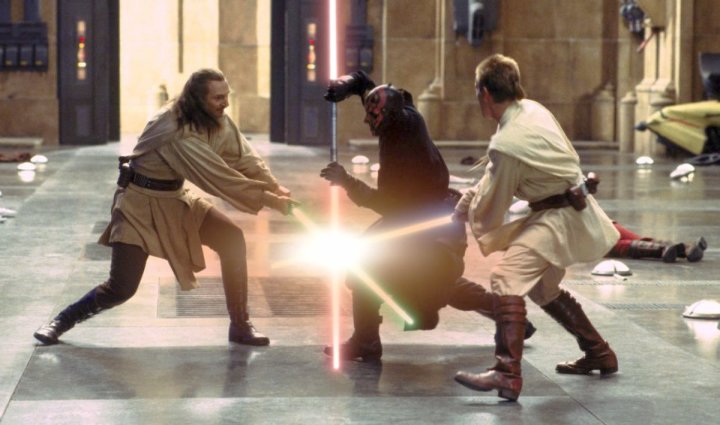 Well-choreographed and emotionally charged, the climactic duel between Qui-Gon Jinn (Liam Neeson), Obi-Wan Kenobi (Ewan McGregor), and Darth Maul (Ray Park) is still rated by many fans to be among the Top three lightsaber duels in the history of Star Wars. The dialogue-free fight is memorable in so many ways–from its pulsating musical theme (see below) to Darth Maul's martial artistry, to Qui-Gon’s heartbreaking demise.

Hit: “Duel Of The Fates”With its frantic orchestral beats and soul-piercing choral vocals, composer John Williams’ “Duel of The Fates,” which accompanies the above-mentioned fight sequence, stands firmly among his greatest and most recognizable themes for the space opera including the "Star Wars Main Theme," and "The Imperial March."

He is a Sith Lord of a few words, scary-looking with his face makeup, and a total bad-ass when it comes to wielding a fiery red, double-bladed lightsaber. Even though we cheered when Obi-Wan cut him in half, many of us were ecstatic too when this fascinating character's story arc was expanded in Star Wars: The Clone Wars (2008-2015), Star Wars Rebels (2014-2018) and Solo: A Star Wars Story (2018).

With a rowdy Roman-like arena, and an obstacle-filled route, the podrace is an exhilarating action sequence with lots of spills and thrills. As we egged on young Anakin Skywalker (Jake Lloyd), we were also introduced to cool new characters such as podracing announcers Fode and Beed, bounty hunter Aurra Sing, and human thief Weazel (played by Warwick Davis, who reprised his role in Solo: A Star Wars Story). There were also Original Trilogy (1977-1983) throwbacks in the form of trigger-happy Tusken Raiders and a young Jabba the Hutt. 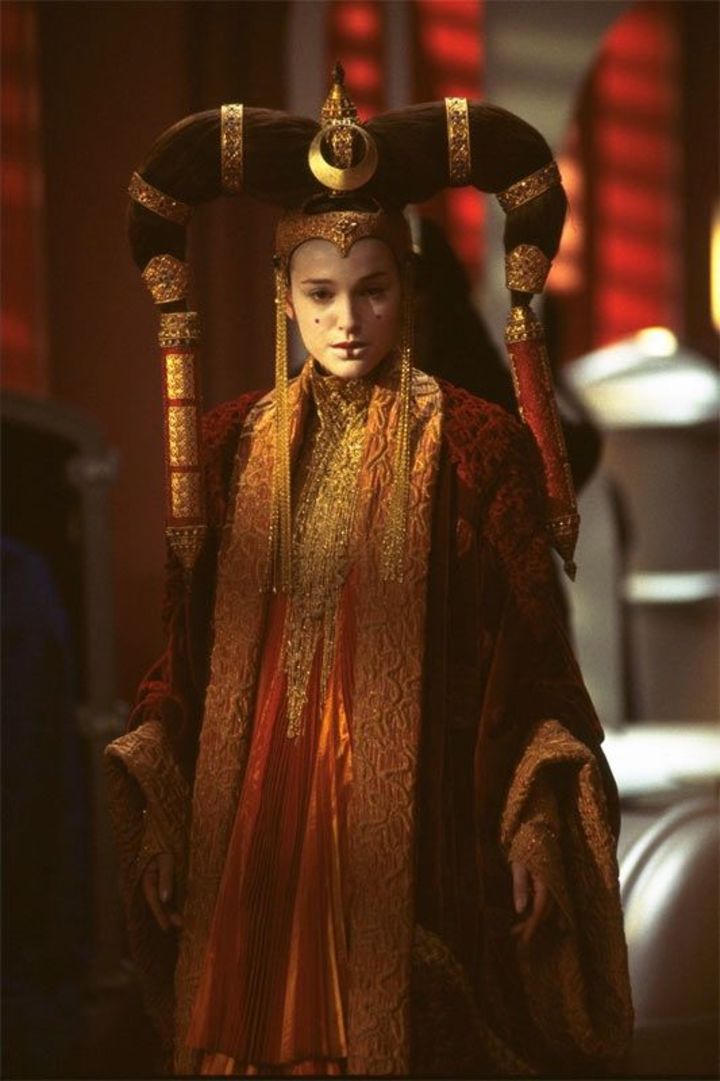 Say what you will about her, Queen Padme Amidala (Natalie Portman) takes “dressing for the occasion” very seriously, even though her stunning costumes are hardly practical for wherever she may be. Top marks though goes to the majestic and very elaborate Manchurian Empress-styled outfit, which she wore to the Galactic Senate (pictured above).

Credit has to go to Lucas and his team for coming up with a new generation of cool new CGI droids. The battle droids, as well as the worker droids, are functional and provide comic relief. But what is truly outstanding are the destroyer droids with their twin blasters, personal deflector shields, and ball-like movements. 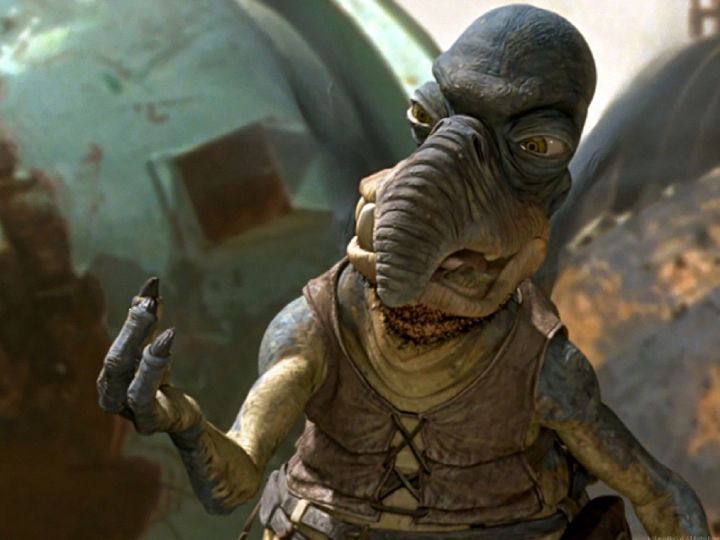 Among the new creatures, Anakin’s Toydarian slave master is easily the most enjoyable (Sebulba the Sug is a close second). His verbal sparring scenes with Qui-Gon are fun to watch, especially when he tells the Jedi, “Mind tricks don’t work on me! Only money.”

The Phantom Menace also introduced us to new planets, and what gorgeous sights they are. Coruscant, which houses the Galactic Senate as well as the Jedi Council, is a city-covered planet with towering skyscrapers and speeder-filled traffic, while Naboo’s aesthetics range from the glittering bubble-like underwater city of Otoh Gunga to classic European-style architecture in the capital Theed. 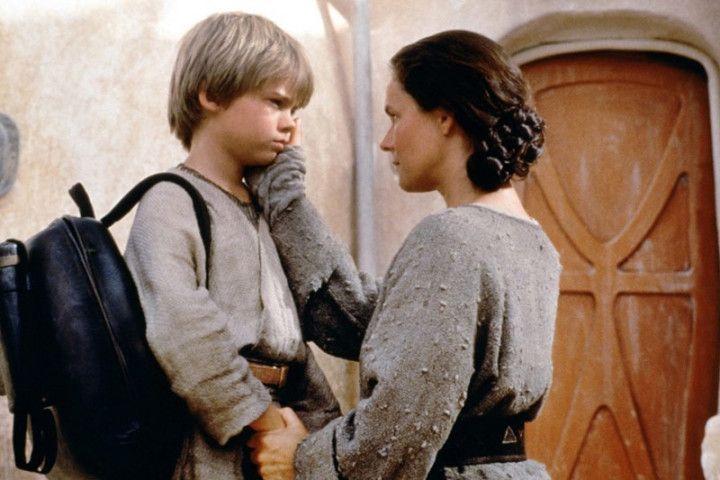 If you didn’t shed a tear or two during this scene, you have a heart of stone, so say some Star Wars fans. After winning his freedom with his podrace win, Anakin and his mom Shmi Skywalker (Pernilla August) share a tear-jerking moment when he asks her, “Will I ever see you again?” Shmi answers with, “What does your heart tell you?” before ending with, “Now, be brave and don’t look back.” The catchphrase, “Don’t look back,” was used on many Phantom Menace merchandise.

The Phantom Menace also has one of the most joyous endings for a Star Wars film, thanks to the gaily Naboo parade, and its rousing celebration theme. The finale has since gained new significance after some fans noted that the parade theme is actually an up-tempo version of Emperor Palpatine’s theme, which signifies that the then Naboo senator has already set his plan for Galactic supremacy in motion, unbeknownst to the Jedi (led by Yoda) standing around him.

And now, the unfortunate misfires… 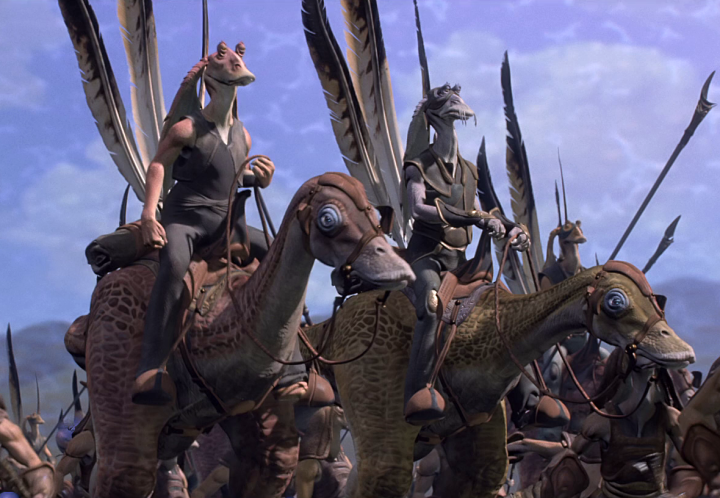 OK, let’s get to the elephant in the room. Yes, Jar Jar Binks (Ahmed Best) was a misfire, and you do wonder just what George was thinking because the other Gungans are not that annoying. Still, actor Best didn’t deserve all the backlash for playing the character. So damaging was the media backlash that he recently revealed that it almost drove him to suicide. Here’s hoping Star Wars fans everywhere will henceforth shower him with nothing but love and support. 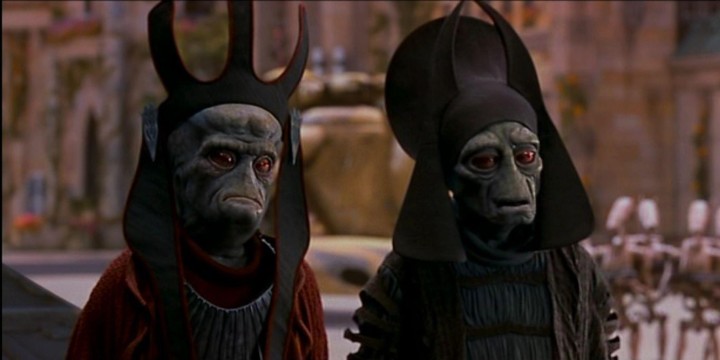 Have to say that the creature design team seems to have totally missed the mark with the Neimoidian Viceroy of the Trade Federation and his ship captain. From the uncomely facial prosthetics (they looked plastic and fake) to the strange accents, the two characters are almost impossible to watch. The only saving grace is probably Gunray’s impressive mechanical walking chair when he was threatening Naboo governor Sio Bibble, but that's not saying much.

'The Phantom Menace': Not The Worst 'Star Wars' Film 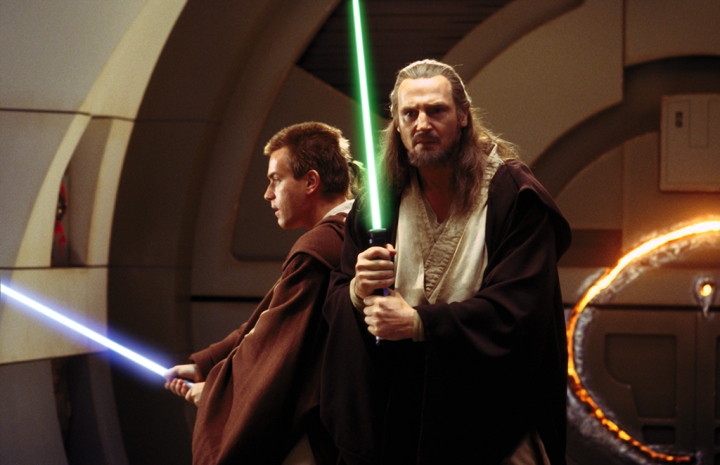 So there you have it. From its amazing soundtrack (easily one of the best in the series) to its Oscar-nominated sound and visual effects, Star Wars: Episode I–The Phantom Menace is far from being the worst Star Wars film, which some fans and media tagged it to be (that dubious honor seriously goes to Episode II: Attack of the Clones, but that’s another story).Thanks to Liam Neeson, we have a new Jedi to admire in Qui-Gon Jinn, while Ewan McGregor gave us new reasons to love Obi-Wan Kenobi (played by Sir Alec Guinness in the OT). Natalie Portman was competent with the material given, while Jake Lloyd really wasn’t that bad, although admittedly there was one “Yippee!” too many.

Including the trivial fact that Queen Amidala’s handmaiden entourage includes future Oscar-winning screenwriter-cum-director Sofia Coppola (Lost in Translation), and Oscar nominee Keira Knightly (Pride &amp; Prejudice), The Phantom Menace has all the elements expected of a Star Wars film. Most of all, a good two decades later, its best bits still ranked among the best cinematic moments in the history of Star Wars.

See all posts by Marguerita Tan →