She is Punished by Sir...

by Karina Hadii 8 months ago in fetishes

A bratty pet gets a surprise. 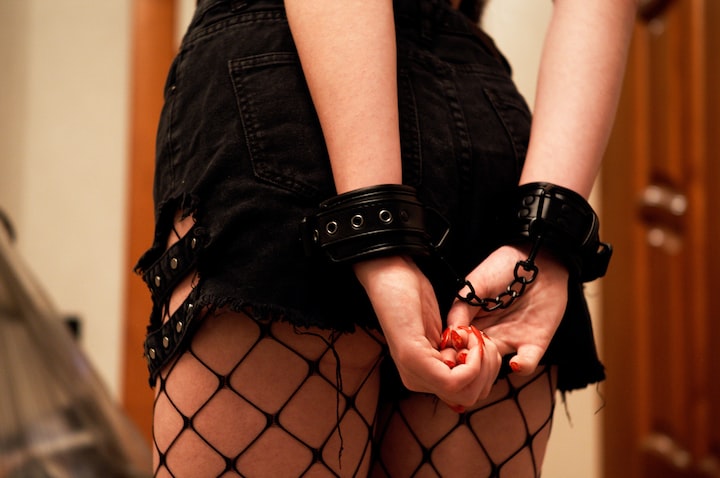 She knew she was being a naughty girl that day, but she didn't care. Each time she mouthed off, she would see Sir's smile get a little tighter, see his eyes get a little more narrow. She knew what to expect as soon as they got behind closed doors. Only Sir had other ideas.

They were on the train, heading home from a friends party. She was being particularly mouthy, wriggling her ass against Sir's crotch, teasing him. She didn't expect to feel his hands slide down her skirt. Didn't expect his finger to slide into her slick opening. A gasp escaped her lips as she leaned back against him. "But-" she whimpered, before he pressed his lips against hers, cutting off her words. His finger slid in and out of her slick folds for a minute, before he removes it. She whimpers as he takes his hands away.

Then he's pulling her hands behind her back, tying them; restricting her. Her fingers brush over his crotch, feeling his hardness. She smirks, before he puts a blindfold over her eyes. Panic races through her, because as soon as she loses her sight, another body is pressing against her from the front. Hands that don't belong to Sir are pushing aside her blouse and Bra, freeing her ample breasts. "Wha--" she is cut off when someone sticks some kind of cloth in her mouth. She knows it wasn't Sir, because she can feel his hands caressing her ass.

"Fuck, if your get to claim her Pussy, I call the slut's ass." Says one of the voices from her breasts .

Sir speaks from behind her. "You, lay on the floor, shell ride your cock as You take her ass, and Suck you off while she takes those two. You all can claim a hole" he laughs roughly.

Suddenly she goes forward with a huge cock still inside her pussy. The man has done as Sir said, laid out. Suddenly, a hand smacks her ass, before pushing her shoulders down. "Take it, Bitch" A voice says as a cock rams into her tight ass. Her gag is taken from her mouth as she screams out. "Fuck whore, your loud." Says a voice from above her, before a cock slides into her mouth. "Much better." The voice groans as he slides into her throat, choking her momentarily.

"Fuck, she's fucking squeezing my cock!" says the man below her, the one fucking her ass is too busy groaning as he finishes in her. Suddenly, all the cocks slide out of her, covering her body with there manliness. The blindfold slips off of her and she sees Sir's bemused face. "Will you ever be able to follow instructions?" He asked, smiling slightly at her.

"Come now, Pet. Lets go home, where I can punish you properly." He says, pulling her off the train as soon as it stops, with only a nod to his friends.

As he pulled her out into the crisp night air, she smiled up at him, her eyes dancing with mischief as she purred, "Is that a promise, Sir?"