Note to self: don't be a whore

by Nina Ferrari 14 days ago in sexual wellness 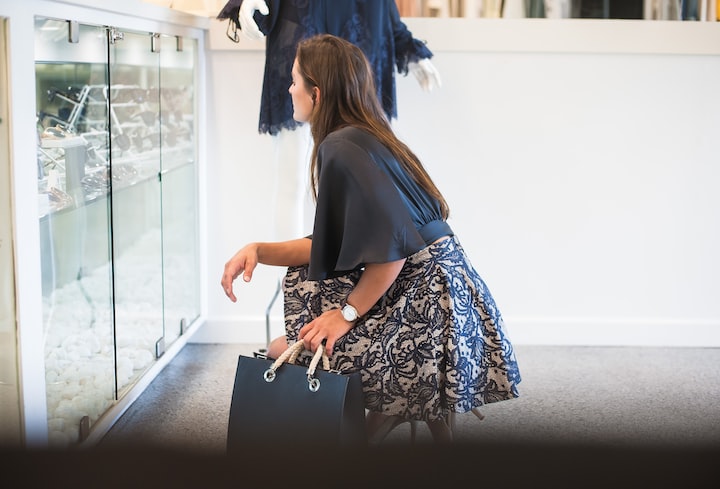 Photo by Mike Fox on Unsplash

Oops, I did it again. I clutched to sex work and variations thereof at the first sign of uncertainty – or, at the first attempt at independence. I want a certain lifestyle, and I know what I need to do to afford it…and once again, after perusing sugar daddy dating I find myself more comfortable with full-blown prostitution than with the more insidious whoring of my real self that is sugar babying.

Although, I’m not sure. The three I met yesterday were a fair cross-section of what’s out there.

Sam, 56, has homes in New York and London and wants to pay me $500 each time we hang out. He’s all boundaries and discretion. He’s “transactional,” as Antonio will later put it.

Antonio, 43, is an intense and possessive venture capitalist who also says he’ll take care of me and drops big numbers. He asks me roughly 20 times if I’m certain I can give him all of me – there must be no other men in my life. I sense that the consequences for transgressing this requirement could be ugly. His stare pierces me for the duration of our dinner but the thing about men is that they think they have us when they don’t. He doesn’t know that I’m sitting on a mountain of feminist theory that could account for his behavior and his psychological profile. But I am also a bundle of paradoxes, and something in me likes the primitive caveman thing. It’s the something in me that wants to be taken care of.

I return home wondering what the hell it is that I’m doing. I’ve struggled with an overly generous father, with a mother who’s had me pegged as crazy and incompetent, and now when I’m trying to break out on my own, I once again cling to a solution that has me milking these self-limiting constructs for all they’re worth. The justification? I have something they want, they have something I want, it’s business. Why not? What about the part of me that’s genuinely attracted to this? Do I write it off as sick, and put my butt back in therapy?

Queers would tell me not to pathologize my attraction, but I’m not so sure. Maybe I should pathologize it – not to denigrate myself, but to strive for something better.

Antonio was genuinely compelling. Alarmingly so. He listened too well and had many things about me figured out. Most disturbingly, he managed to get me to open up beyond what I’d intended. I found myself revealing far too many personal details. He’s an alpha male skilled at getting what he wants. Again, something in me likes this. Although, his physique suggested that his tendencies might not translate so well in the bedroom. I could be wrong.

With Sam, on the other hand, there was a more palpable sexual chemistry – a fucked up daddy/baby one, to be sure. He did not have me psychologically pegged. At all. Antonio was someone who I genuinely enjoyed conversation with. I found myself engaged, unaware of the time flying by. He had me pause and reflect on a number of things. Internally, I’m judging him for his male ego, his possessiveness and controlling nature, his arguably backwards ideas on gender…I ask him point blank why he wouldn’t desire a partner his own age, who has more life experience, and he says, “I have all the experience I need.” With someone like him, he says, “we’d butt heads.” I know what he means. God knows I’ve butted heads with a partner or two in my day, and something in me likes to be dominated instead. But I judge him for not wanting to butt heads. He doesn’t want to grow, be pushed and stretched emotionally, psychologically…though he says he gets his life lessons elsewhere. There is a fair truth to all of his assertions.

At the same time that I’m judging him, I’m intrigued by his success. At the same time that I’m intrigued, I’m put off by what I guess I could call his shadow. The things that he doesn’t intentionally project to the world. His waistline. The messy bits littering the inside of his car. The fact that, despite his wealth, he’s living between two places right now, one with a colleague and one owned by a relative. There’s nothing wrong with these things, but when paired with such confidence…I’m not getting a picture of self-honesty. But who am I to talk?

He imparts wisdom that resonates with me. He’s learned how to succeed in this world – something that I want. Something that I’ve always know I have the capacity for. When I try to reject such aspirations in the name of loftier values, something pulls me back and says, “You were created with this nature – don’t reject it.” Something in me lights up. I imagine that I could metamorphosize into something else, as I’ve done consistently over my life.

A voice says, “And you really think that by being his property, his possession, his kept woman, you’ll be empowered to success?” It’s a fair question. In the shower of his adoration, I feel surrounded by golden promise. But what would it be like to break up with this man? What sort of interest would I be paying on his type of support? The man gives me the creeps. Approaching the restaurant before I’ve even met him, I call him on my cell phone and he says, “I see you.” I feel watched. He drops me off at the end of the night at Safeway, at my request (I don’t actually need anything but no way in hell am I leading him to my building – he even makes comments as we’re driving like, “So this the area that you generally spend time in?”). I wander through the supermarket for ten minutes pretending to shop for necessities with the feeling that someone might be watching me through the window. When I leave, I find myself scanning the streets for his vehicle.

I know this is mostly psychological. I’d like to think he drove on home, but either way he’s put his hooks into me. The whole thing is dangerous, if only psychologically…but God, is that something I can really afford?

I’ve made the decision over and over to NOT PROSTITUTE MYSELF, but I keep going back in one form or another. It’s just too easy. Not only that, but something in me likes it.

After sending a parting text to Antonio, who I gather had a bruised ego for not “winning the prize” as he put it, I receive this:

Writer residing in the Pacific Northwest.

See all posts by Nina Ferrari →